The Second World War produced some of the most iconic handguns in history, some of which are still being manufactured today. 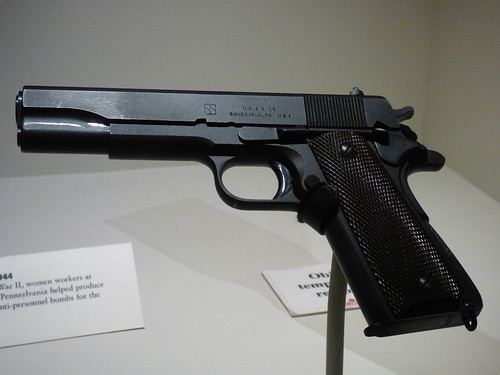 The Colt 45 is one of the most widely-manufactured handguns ever made, and has served continuously with American forces from before the First World War to the current war in Afghanistan. Designed by John Browning in 1911, it was one of the first pistols to use the 45 caliber cartridge. During the First World War it was the standard-issue sidearm for doughboys in France. During the Second World War it was carried by infantry officers, tank crews, airplane pilots, military police, and commandos, and was manufactured during the war by a wide variety of companies under military contract, including the Remington and Ithica firearms companies and the Singer Sewing Machine Company and the Union Switch and Signal Company. The Colt 45 was also manufactured before the war in Norway under license, and when the Nazis invaded, they continued to produce the pistol, with Wehrmacht markings, for use by German officers.

In 1985, the Colt 45 was replaced in the US Army infantry by the Italian-made Beretta 9mm, in an effort to standardize all NATO weapons to use the same ammunition, but US Special Forces continued to carry the 45, preferring its superior close-range stopping power. In all, over 2.5 million Colt 45’s have been manufactured. 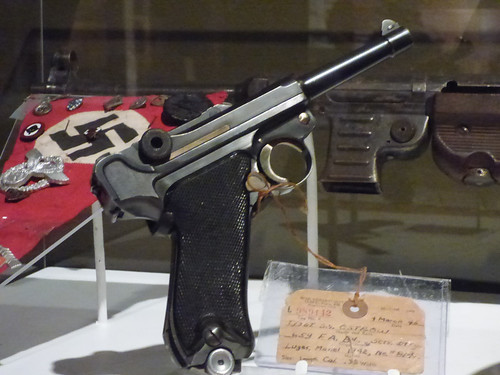 The 9mm Luger P08 is probably the most famous handgun in the world. Although it is closely identified with the Nazi regime and the Second World War, however, the Luger was actually designed in the last years of the 19th century, by Georg Luger of the Deutsche Waffen Manitionsfabriken (DWM). The pistol was most revolutionary for its cartridge, a 9mm caliber bullet that was introduced as the “Parabellum” (“for war”) and was soon adopted by virtually every other military sidearm manufacturer as the 9mm Luger. It is the standard pistol cartridge still used in European military sidearms today.

The Luger P08 was first adopted by the Swiss Army in 1900, then by the German Navy in 1904 and the German Army in 1908. It was the standard sidearm for German troops during the First World War. In 1938, after the Nazis took power and began the re-armament of the German Wehrmacht, plans were made to replace the design, but manufacturing shortages insured that the 9mm Luger remained in use throughout the entire war. It was a highly prized souvenir for American troopers. 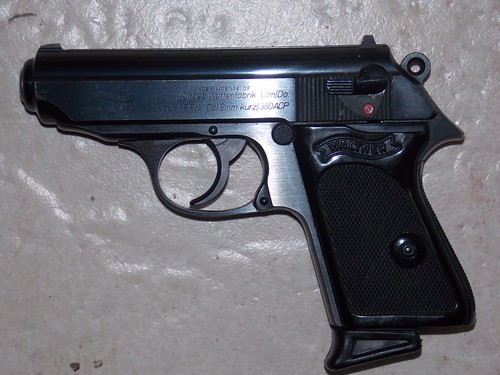 The Walther PPK is probably most famous as being the handgun used by the fictional British Agent 007, James Bond. Introduced in 1931, the PPK (the German initials mean “Police Detective Pistol”) was produced as a service weapon for civilian German police officers. The PPK uses a “short” version of the 9mm Luger cartridge, called the 9mm Kurz. The short cartridge was too weak for battlefield use, so When the Nazis took over in 1933, they kept the Luger P08 for service in the German armed forces, and used the PPK as a decorative sidearm for high-ranking officers and Nazi Party officials. When Hitler killed himself in the Berlin Bunker at the end of the war, he used a Walther PPK pistol. 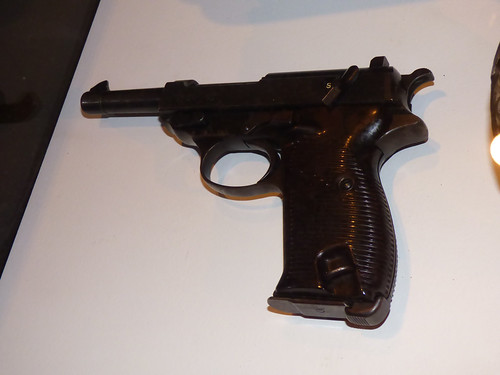 In 1938, when the Nazis laid plans to replace the WW1-era 9mm Luger with a newer design, they selected the Walther P38. A larger version of the Walther PPK, the P38 used the same 9mm Parabellum cartridge as the Luger (though a small number were made in 45 caliber), and the gun copied the action mechanism used in the PPK. The pistol went into production in 1939. The Germans hoped to equip all of their forces with P38’s by 1942, but manufacturing problems and Allied bombing crippled the gun’s production. Today, the 9mm P38 is issued to many German police officers. 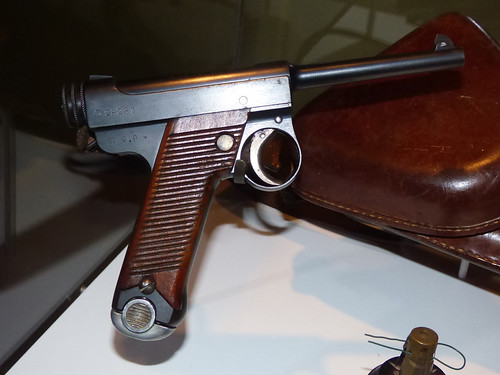 The most commmonly-carried Japanese sidearm during World War Two was the Nambu Type 14. This was not an officially-issued military weapon: unlike most other armies, the Japanese required their officers to purchase their own sidearm, and most of them chose the Nambu. Based on a 1902 design by Admiral Kijiro Nambu, the Type 14 first went into production in 1926. Although it looks superfically like a German Luger, it is very different in internal construction, and uses an 8mm pistol cartridge instead of the 9mm parabellum. The Nambu was widely considered, even by the Japanese, to be inferior–the weak magazine springs often led to jamming, and the 8mm bullet was too underpowered for effective military service. It was not unusual for Japanese officers to throw away their Nambus in exchange for captured American Colt 45’s.

The Japanese manufactured about 200,000 Type 14 Nambus during the war.

The Type 14’s greatest influence came after the war, when American firearms designer William Ruger obtained two Nambu pistols and modified their design to produce the Ruger Standard .22, which became one of the most popular sporting pistols ever made. 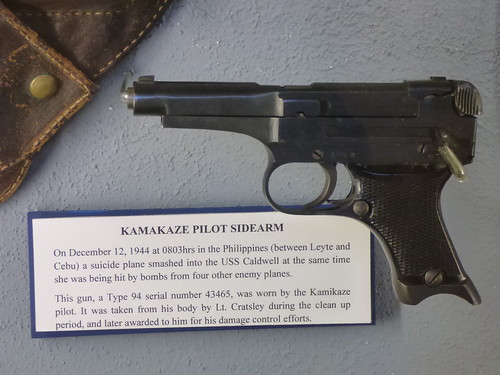 As the war progressed, Japanese industry began to feel the effects of the American submarine blockade that cut off imports of raw materials. The Type 14 Nambu pistol, originally made by the Tokyo Arsenal, was now being manufactured by anyone who had equipment that could be modified to make it, including typewriter companies, tin can manufacturers, and even the Tokyo Electric Company.

In desperation, the Japanese ordered a switch in design, dropping the Type 14 in favor of another Nambu pistol, the 1934 Type 94. The Type 94 used the same 8mm cartridge as the Type 14, but the gun itself was smaller, simpler, and easier to produce. About 72,000 Type 14’s were made during the last years of the war.

2 thoughts on “Iconic Hand Guns of the Second World War”