In 1956, a US Navy R4D Skytrain transport plane named “Que Sera Sera” touched down at the South Pole as part of an international scientific study. It was the first aircraft to land at the pole, and the first people to visit there in 44 years. 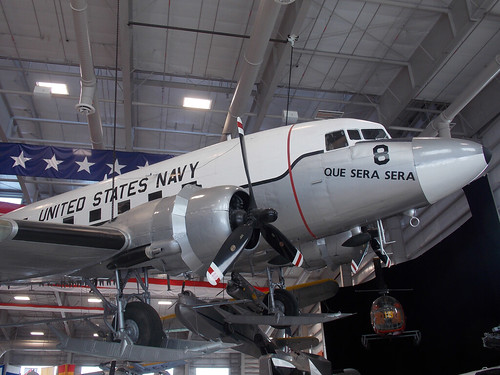 The R4D Skytrain “Que Sera Sera”, on display in Pensacola

In 1936, the first DC-3 airliners were put into service. They quickly became one of the most successful commercial aircraft ever built, propelling the infant air travel industry to record numbers.

Although the United States was still isolationist in the 1930’s, the military already had a number of bases scattered across the globe, and needed an efficient supply system to move large amounts of cargo from one area to another. And the aircraft that was best-suited for long-distance air transport was the DC-3. Just before the outbreak of World War Two, the Pentagon began procuring modified versions of the commercial DC-3, with reinforced floors and a large cargo door. The Army version was designated the C-47 and the Navy version was designated the R4D. The official name for the plane was the “Skytrain” (the British RAF, which also purchased the plane, called it the “Dakota”), but among military pilots and passengers, it was universally known as “The Gooney Bird”.

More than 10,000 were manufactured during the war, with almost 600 of these going to the Navy. One of the most important roles played by the C-47 was in delivering supplies to besieged China, which was tying up hundreds of thousands of Japanese troops in combat on the mainland. The C-47’s flew from bases in India over the Himalayas to airfields in China, a trip which became famous as “going over The Hump”. The Gooney Bird was also used to deliver paratroopers in Europe, dropping over 4,000 troops in Sicily in 1943 and 50,000 during D Day in 1944. In the Pacific, the C-47 had the odd distinction of being used by both sides: in February 1938 the Japanese had purchased a license from Boeing to build the DC-3, and was producing a military transport version as the Nakajima L2D Type 0.

After the Second World War ended, a large number of C-47s were declared “surplus” and sold to civilian owners. Of those remaining in military service, many were transferred to the Strategic Air Command, where they were in use until retired in 1967. During the Vietnam War, the remaining Gooneys were converted to electronic-warfare aircraft known as EC-47s; several were also fitted with a number of electric gatling mini-guns and entered service as the AC-47 “Specter” gunship. The Specter, used as a ground-support craft, became known as the “Spooky” or as “Puff the Magic Dragon”.

The Navy, meanwhile, had also retained a number of R4Ds after the Second World War. Some of these were converted into electronic warfare, search and rescue, or anti-submarine versions. Another variant was the R4D-5, which was fitted out for arctic operations; the military was interested in polar bases as potential areas for operating against the Soviet Union. To allow the R4Ds to operate from arctic bases, the landing gear was covered by skis, improvements were made to the engines, and in 1946, the Gooneys were modified to take off from aircraft carriers. The first long-distance arctic operation was Operation Highjump in January 1947, when six R4D-5s took off from the carrier Philippine Sea to join six Navy PBM Catalina flying boats in photo-mapping 1.5 million square miles of the Antarctic along 5500 miles of coast.

In 1956, an international group of scientists proposed that a global effort be made to conduct wide-ranging scientific studies of the Earth over the next two years, a project that was adopted as “The International Geophysical Year”. Nine countries, including the US, Soviet Union, France, Britain, and Japan, announced that they would send expeditions to the Antarctic, one of the least-explored areas on the planet. As its contribution to the effort, the US Navy formed Task Force 43, consisting of three icebreakers and four cargo ships and tankers, that would carry out Operation Deep Freeze to map the Antarctic coast and establish scientific observation posts on the ice. As part of this effort, one of the Navy’s R4D-5L Skytrains, named “Que Sera Sera” (“whatever will be, will be”–the lyrics from a popular song by Doris Day) was tasked with landing at the South Pole. It would be the first time anyone had stood on the Pole since British explorer Robert F Scott in 1912.

On October 31, 1956, Que Sera Sera touched down at the Pole, and, with the engines left running to protect them in the biting cold, the seven crew members became the first Americans at the South Pole. They were pilot Conrad “Gus” Shinn, copilot William Hawkes, crew chief John Strider, navigator John Swadener, radioman William Cumbie Jr, observer Douglas Cordinor, and Rear Admiral George Dufek, the Task Force Commander. They made some scientific measurements designed to test whether it was feasible to establish a permanent air station in the area, and Rear Admiral Dufek planted an American flag next to the Norwegian flag left by Roald Amundsen and the British flag left by Scott. An Air Force C-124 Globemaster circled overhead; if the Skytrain was unable to take off again, the C-124 was stuffed with supplies that would be dropped to the landing team to enable them to survive on the ice until a rescue effort could reach them. Another Skytrain carrying newspaper reporters and photographers to the site had already been forced to turn back with engine trouble.

And indeed when it came time for the R4D to take off, the crew ran into a problem. Not only was the temperature outside minus 60 degrees, but the elevation at the Pole was 10,000 feet, which limited the amount of lift the wings could generate–and at 28,000 pounds, the plane was already stretching its limits. The landing skis had also melted into the ice and become stuck. To break free, Que Sera Sera was fitted with four Jet-Assisted Take-Off (JATO) pods, which could be ignited on takeoff to provide extra thrust. The first attempt failed. “I pushed the throttle fully forward and nothing happened,” Shinn would later report. “I then fired four jet-assist bottles and still nothing. I fire another four and got slight movement, then four more, followed by another three and we more or less staggered into the air.” The plane lumbered across the ice and successfully left the ground at 9:23pm local time, setting course for its support base near the Duncan Mountains. There was a storm raging which blinded them completely and forced them to fly on instruments.

On the way back, Que Sera Sera developed engine trouble, and with the C-124 accompanying it, diverted instead to a smaller base at the Liv Glacier. After a quick repair and topping off its gas tanks, the R4D flew to the American base at McMurdo Sound.

The next month, more planes began arriving at the Pole, and construction of the Amundsen-Scott South Pole Station began. The Station still operates today as a permanent supply base for scientific research in the Antarctic.

The Que Sera Sera was given to the Smithsonian Institution and was restored in 1966. Today, she is on loan to the National Naval Aviation History Museum in Pensacola FL, where she is on display.

6 thoughts on “Icons of Aviation: The “Que Sera Sera””