In 1956, at the height of the Cold War, an Air National Guard B-25 bomber made an emergency water landing into the Monongahela River, in the middle of Pittsburgh, in broad daylight, and sank. But the next day, when the Air Force tried to recover the sunken plane, it was completely gone, and hasn’t been found since. What happened to the “Ghost Bomber”? Conspiracy theories abound…. 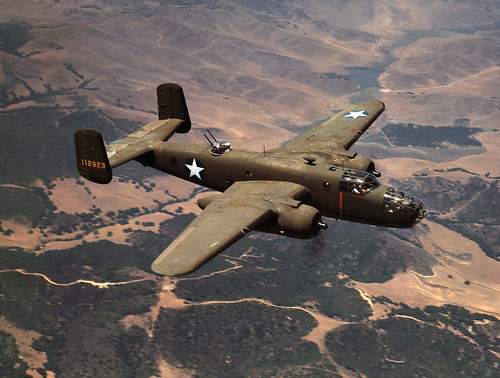 On January 30, 1956, Air National Guard TB-25N Number 44-29125 took off from Nellis Air Force Base in Nevada. The World War Two vintage Mitchell TB-25 was built as a training version of the B-25 medium bomber, used to teach navigation. The National Guard had been flying this aircraft since the end of the war, and now, as an obsolete relic, it was scheduled to be retired and scrapped in another 18 months. On this day, the TB-25 carried a pilot, co-pilot, crew chief, and four military personnel as passengers, and was scheduled to pick up some spare airplane parts in Pennsylvania and deliver some passengers to Maryland.

Piloted by Major William Dotson, a veteran of World War Two and Korea, the bomber landed at Selfridge Air Force Base in Michigan, where one of the passengers left, and the remaining crew and passengers spent the night before taking off at 1:43pm the next day, bound for Olmstead Air Force Base, near Harrisburg PA. According to their instruments, they had enough fuel for three hours of flight–plenty for the one and a half hour trip.

But as the bomber reached Pennsylvania, something went amiss. The fuel gauge began to drop sharply, and Dotson decided to make a landing at Greater Pittsburgh Airport to have it checked out. Before he could get there, a winter storm moved in, and the plane was buffeted by headwinds. Thinking they wouldn’t get to Pittsburgh Airport, they decided to go for the smaller Allegheny County Airport instead, but didn’t make that either. Shortly after 4pm, over Pittsburgh, both engines went dead as the fuel ran out.

Looking down through the clouds, the only clear area Dotson could see was the Monongahela River, and he decided to ditch the plane there. Roaring in over the Homestead Bridge, the B-25 belly-landed in the river. Immediately all six people on the plane scrambled out and, as the plane floated a short distance and began to sink, they found themselves in the freezing water. Four of the group were rescued: two drowned in the icy river and their bodies were recovered several months later. The plane stayed afloat for about fifteen minutes, then disappeared beneath the surface. At this spot, the Monongahela was about 30 feet deep, enough to cover the 17-foot tall B-25 completely.

Since the sunken plane presented a serious navigation hazard for the heavily-travelled river, Air Force personnel began salvage operations the next morning, using Coast Guard Cutters and Army Corps of Engineers barges to dredge anchors back and forth across the river to snag the airplane. On one pass, they caught one of the wings, which briefly appeared at the surface, but then the anchor slipped off and the wing fell back in. On subsequent passes over the next few days, some large object or objects were hooked, but the cables broke, nothing was brought to the surface, and it remains unknown if it was airplane wreckage, old sunken barges, or whatever else. After two weeks of searching, the Air Force gave up and left. Despite being in a known location in a relatively shallow river, the B-25 could not be seen by divers in the muddy water, nor could it be found by dredging. It had, seemingly, vanished completely.

Nine months later the Air Force auctioned off the salvage rights to the B-25. There was only one bidder, the owner of a nearby seaplane company who paid $10. But he was unable to locate the sunken plane either. Since then, not one piece of the “Ghost Bomber” has ever been found. 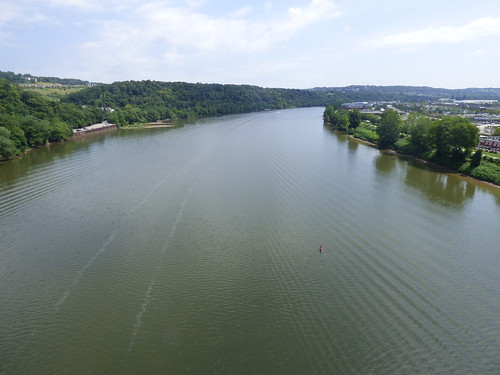 View of the Monongahela River from the Homestead Bridge. Somewhere under here is the missing bomber.

The conspiracy theories began to fly. It was immediately speculated that the reason why the plane was not found was because it was no longer there: the military had, it was whispered, secretly come in the middle of the night and had scooped up the entire airplane and carried it away, under cover of darkness, before the “official” search operation had even begun that morning. Why would they do this? Because the plane carried some Cold War secret that the Pentagon wanted to protect–a nuclear weapon, perhaps, or maybe a cargo of top secret nerve gas, or perhaps some important secret passenger like a Soviet defector. Or maybe even, some whispered, part of a flying saucer. It wasn’t long before “witnesses” began to come forward with their stories: one person called a late-night radio talk show and claimed to have been a trucker hired by the CIA to transport the plane to a nearby Nike missile base. Other people claimed to have seen the wreckage at Wright-Patterson Air Force Base in Ohio, home of the mysterious “Hangar 18”. Another “witness” claimed to have seen a mysterious “seventh passenger” leave the crashed airplane dressed in a military uniform without any insignia.

So, how likely are the conspiracy theories? Not very. Although the Air Force was indeed flying secret practice missions with nuclear weapons across the US at the time, the medium-sized B-25 was not used for those flights, since it was not capable of carrying most nuclear weapons. And this plane in particular was not equipped to carry weapons of any sort–it was a navigational trainer, and an obsolete one at that. There is no evidence at all that the mission was anything other than a routine flight to pick up cargo and deliver passengers. Nor does it seem very likely that the Air Force could have picked up and carried away an entire airplane in the middle of a major US city without thousands of people being aware of it.

But of course the biggest mystery remains–what happened to the plane? In 1995, a number of local enthusiasts formed an organization, The B-25 Recovery Group, which is working with the local history society to study the incident and, if possible, find and recover the aircraft. After interviewing witnesses and bringing in experts, they think they have an explanation. The particular section of the Monongahela where the plane went down, known as Birds Landing, was once used to dredge gravel from the bottom which was then sold as fill. As a result, there are now several large pits in the bottom of the river, perhaps 20 feet deep. The Recovery Group has mapped these using sidescan sonar, and believes that when the Air Force hooked the plane by the wing during the initial salvage operations, they unintentionally dragged it into one of these pits, where it was unreachable by dredges and has remained, steadily being buried by river silt, ever since.

The group is currently raising money to bring in a magnetometer to attempt to find the wreck, which is now probably buried by 10-15 feet of sediment. Whether or not they can recover and restore the B-25 depends on how well it has weathered 60 years of the polluted and acidic water.