In the closing years of the 18th century, the United States found itself in an undeclared conflict with the newly-established French Republic. The “Quasi War” brought General George Washington out of retirement, led to draconian laws that stifled political opposition, and provoked a political fight over the wartime powers of the President that still has not been resolved today. 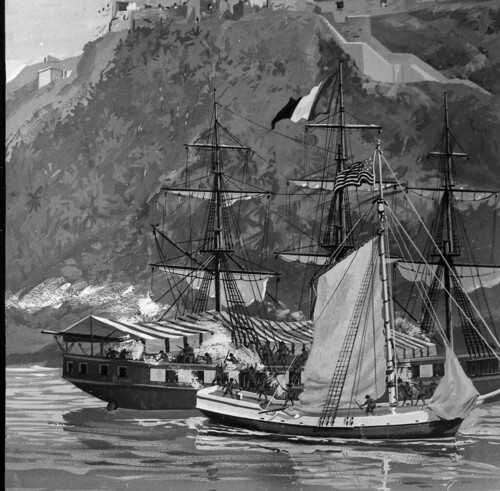 A French privateer is captured by US Marines during the Quasi War. photo from Wiki Commons

In 1783, after seven years of warfare against the King of England, the United States, supported by money and military forces from the King of France, won its independence. One of the new nation’s first acts was to sign a treaty of friendship and alliance with France.

In 1789, however, the people of France, inspired partly by the success of the colonial American rebellion, overthrew the monarchy in the French Revolution. The new French Republic and the British King soon became embroiled in yet another war, and the French government sent an ambassador named Edward Charles Genet to America to ask for US help in the war under the treaty. But instead of meeting with President Washington in Philadelphia, Genet landed in South Carolina and immediately began recruiting American ships as privateers against the British.

The United States considered itself too weak to become involved in a European war, and viewed Genet’s actions with alarm, fearing it might lead to another war with Britain. So in 1795, President George Washington formally declared a Proclamation of Neutrality, noting that the US would support neither side in the war and would continue to carry out trade with both France and England. And, in addition, the US would also no longer make payments on the debt it owed to France for financing the Revolutionary War. The war debt, along with the previous treaty of friendship with France, the US announced, was now void because the French royal government that had signed it no longer existed. Washington also explicitly tried to placate England by signing the Jay Treaty, granting special trade privileges to British ships.

In response, the French government began to view the US as an ally of England in the war, and allowed French privateers to attack British merchant ships in American waters, and occasionally an American merchantman as well. As tensions grew, John Adams was elected President in 1797. In a message to Congress, Adams noted, “I have received a letter from His Excellency Charles Pinckney, esq., governor of the State of South Carolina, dated the 22d of October, 1797, inclosing a number of depositions of witnesses to several captures and outrages committed within and near the limits of the United States by a French privateer belonging to Cape Francois, or Monte Christo, called the Vertitude or Fortitude, and commanded by a person of the name of Jordan or Jourdain, and particularly upon an English merchant ship named the Oracabissa, which he first plundered and then burned, with the rest of her cargo, of great value, within the territory of the United States, in the harbor of Charleston, on the 17th day of October last, copies of which letter and depositions, and also of several other depositions relative to the same subject, received from the collector of Charleston, are herewith communicated.”

When the French foreign minister Charles-Maurice de Talleyrand-Périgord sent three intermediaries to the US in 1798 to try to negotiate a treaty of friendship and end the naval harrassment, they refused to even begin negotiations until the American government first paid a large bribe to Talleyrand, agreed to extend a war loan for the French Government, and offered a formal apology for breaking the previous treaty of friendship. The “XYZ Affair”, as it was called, angered Adams and the American public, who considered it an affront to American honor. Adams angrily informed Congress, “The refusal on the part of France to receive our minister is, then, the denial of a right; but the refusal to receive him until we have acceded to their demands without discussion and without investigation is to treat us neither as allies nor as friends, nor as a sovereign state . . . Such attempts ought to be repelled with a decision which shall convince France and the world that we are not a degraded people, humiliated under a colonial spirit of fear and sense of inferiority, fitted to be the miserable instruments of foreign influence, and regardless of national honor, character, and interest.” Adams asked Congress to approve new taxes on shipping tonnage to finance the construction of 12 new warships for the Navy to protect American shipping from the French, and relations between the US and France reached the breaking point. “Millions for defense,” one popular slogan went, “but not one cent for tribute.”

The French privateers, meanwhile, increased their attacks on American ships, capturing some 300 merchant vessels over the next year. In response, Adams, acting without Congressional approval, ordered US Navy ships to stop any merchant vessels heading in or out of French ports in the Caribbean. In May 1798, former President and General George Washington was called out of retirement to once again take command of the US Army and prepare it for a possible war with France. And in July, Congress approved a proposal allowing US Navy ships to attack French vessels that posed a threat to American merchantmen.

For the next two years, although there was no formal declaration of war, the French and American naval forces warily poked each other in what became known as the “Quasi War”. The French Navy captured or destroyed about 2,000 American merchant ships, while the US Navy captured 85 French warships. One captured French ship was commandeered by the Navy and later taken back by the French, before once again being recaptured by the US. The most notable actions were the capture of the French frigates Insurgente and Vengeance in two separate fights by the USS Constitution. In all of these skirmishes, the US Navy, consisting of 25 ships, steadily pushed the French fleet out of the Caribbean, allowing US commercial interests to enter and eventually dominate the region.

The Quasi War also provoked intense political debate in the US. The Democratic-Republican Party (including Vice President Thomas Jefferson), opposed the Federalist Adams and his military actions. There was argument over how far Adams could take any military action without an explicit declaration of war from Congress. The debate became so intensely partisan that Adams asked the Federalist-dominated Congress to pass a series of laws, known as the Sedition Acts, that made it illegal to criticize the US government, and jailed a number of Democratic-Republican politicians and newspaper editors. The ambiguity between the powers of the President and the Congress during wartime that surfaced during the Quasi War, and the wartime rush to suppress dissent and criticism, still remains with us today.

The Quasi War came to an end after French General Napoleon Bonaparte seized power from the French revolutionary government in November 1799 and declared himself Emperor of France. Napoleon had enough problems facing him in Europe, and had no interest in continuing a conflict with the United States. So in September 1800, he signed a Convention with the US agreeing to American neutrality, ensuring the safety of American ships, and bringing the undeclared conflict to a close. For the rest of the 19th century, the US would not enter any formal military alliance with another country.

In the end, the Quasi War was a boon to the fledgling US. It expanded the US Navy (which staved off defeat by Britain in the upcoming War of 1812 and saved American independence) and made the United States a military and commercial force in the Caribbean. And in 1803, when Napoleon needed quick cash to finance his wars in Europe, he turned to the US and sold the province of Louisiana to Thomas Jefferson’s government, doubling the size of the United States and beginning America’s march across the continent.

2 thoughts on “The Quasi War: When the US Fought France (Sort Of)”