In the Middle Ages, when the Roman Catholic Church was the most powerful (and richest) institution in Europe and held secular as well as religious influence over everyone’s life, the largest building in any town was likely to be the church. The pinnacle of church-building were the grand cathedrals that dotted Europe as each city sought to build the biggest and most richly ornamented cathedral. Medieval cathedrals were the Middle Ages equivalent of the Apollo moon program–they stretched contemporary technology to its limits, and required enormous investments of manpower and resources. And one of the grandest of England’s churches was Wells Cathedral, near Glastonbury. 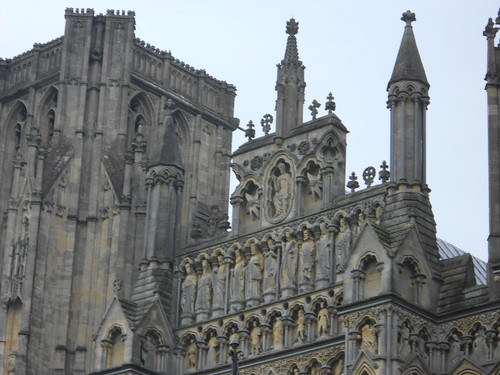 It is not known precisely when Christianity entered the Roman province of Britannia. We do know that St Alban was executed by the Romans near Londinium in the year 304, just a few years before Emperor Constantine ended the persecution of Christians and declared Christianity as the state religion of the Roman Empire.

By the 7th century, most of the island was Christian, and the town of Glastonbury had established itself as a religious center, with a number of monasteries and churches. In the 12th century, there was a religious revival throughout Europe, sparked perhaps by the Crusades. While men who were capable of bearing arms were expected to travel to the Holy Land on Crusade, the Pope sought a way to involve those who stayed behind, and issued a proclamation granting “indulgences”, or forgiveness of sins, to anyone who participated in the building of a church. This sparked a wave of church construction that lasted for hundreds of years, with each town successively trying to build a cathedral that was grander and more impressive than its neighbor’s. The earliest Gothic cathedrals were built in France, and soon spread to Germany and Britain.

The British town of Wells had been founded by the Romans, taking its name from the freshwater springs found there. In 1180, construction was begun on a cathedral, to be built in the Gothic style on the site of an old Saxon church. The project was overseen by Bishop Reginald Fitz Jocelin. By 1196, enough of the interior portion had been finished to allow it to be used for services, but construction on the ornamented facades, towers, and buttresses continued. In 1215 the West Front facade was begun: it featured a large number of carved statues that depicted the Biblical history of the world, and was the most heavily-decorated cathedral wall in the world at the time. The cathedral was finished a few years later, and was dedicated in 1239. It soared to 160 feet tall.

Then, in the middle of the 13th century, an earthquake damaged the central tower of the cathedral. After a 60-year repair and expansion project, cracks began to appear in some of the other towers, and in 1338 large scissor-arch braces were added to reinforce them. At around this time many of the stained-glass windows were also re-done. The most famous of these is the Golden Window, which depicts the ancestry of Jesus through Mary all the way back to Jesse, the father of King David. Then in 1386 and 1424, two more towers were added to the cathedral.

Wells Cathedral is built to the standard cross-shaped floor plan that typified all medieval churches. The long central aisle is oriented east-west, with the entrance at the east. At the west end is the nave with the altar and prayer benches. At the east end is the choir. Two transepts near the nave have secondary altars, and also serve as areas where prominent local people and church officials can be buried.

In 1343, the Bishop’s Palace was built next to the cathedral. It served as the residence for church officials, but also doubled as the town’s citadel in case of attack, and was built with defensive towers, crenelated walls with arrow slits, and a water-filled moat.

Over the centuries, the cathedral survived many potential disasters. During the Protestant Reformation and then the Civil War, Cromwell closed all the Catholic cathedrals in England, the statues of saints were torn down, and the painted walls depicting popes and saints were painted over. Most of the stained glass windows were broken–the Golden Window survived only because it was too high for the stone-throwing mob to reach. During the Monmouth Rebellion in 1685, a squadron of rebel cavalry used the cathedral as a stable, and it was later used as a temporary prison. In 1703 a gale blew out some of the windows. In the 1840’s, much of the cathedral was cleaned and some restoration work done.

Today, in addition to the 150,000 local residents who worship there, Wells Cathedral is visited by about 300,000 tourists each year.