In 1957, the Soviet Union won the Space Race by launching the first artificial satellite, called Sputnik, into orbit. At the time, it was considered to be a tremendous blow to American prestige. But now, recently declassified documents have demonstrated why President Dwight Eisenhower delayed the US satellite program–and how the Sputnik launch actually helped the Pentagon achieve American military objectives. 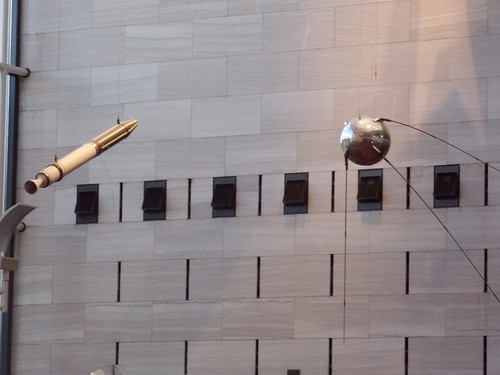 When President Eisenhower took office in 1953, the Cold War was raging. America was fighting a war against Chinese Communist forces in Korea, the US had test-detonated a thermonuclear hydrogen bomb and the Soviet Union would follow before the end of the year, and both sides were rapidly building long-range bombers and developing intercontinental missiles capable of delivering nuclear weapons to each other.

For Eisenhower, who had experienced firsthand the devastation that resulted from the Second World War, the ultimate nightmare scenario was another “Pearl Harbor”–a Soviet surprise attack that would catch the US offguard. And as former Commander in Chief of the Allied Forces in Europe, Eisenhower knew that the only way to prevent a surprise attack by the USSR was through constant surveillance and reconnaissance. And the best way to do that was from the air.

But the Soviet Union was a closed secretive society with a dense array of border and air defenses. American reconnaissance planes were able to fly around the edges of Soviet territory and map the border stations, but were unable to penetrate to the interior.

In 1955, the Central Intelligence Agency was directed to contract with the Lockheed Company for a top-secret spy plane that could overfly the USSR at a speed and altitude high enough to avoid Russian interceptors and surface-to-air missiles. The plane, known as the U-2, began photographing military installations inside the Soviet Union in 1956.

But it was not enough. The reconnaissance flights were dangerous, both physically and politically, and could only cover relatively small areas at a time. What was needed, Eisenhower realized, was a way to constantly monitor the whole USSR, using cameras, radio receivers and infrared sensors. And by 1953, the means to do this were becoming feasible–an artificial satellite.

In 1954, Eisenhower appointed a secret committee headed by Dr James Killian, President of MIT, to examine the implications of a Soviet nuclear “Pearl Harbor” and to make recommendations. Killian’s report, titled simply “Meeting the Threat of Surprise Attack”, was issued in February 1955. “Because of our air-atomic power,” the report noted, “we have an offensive advantage but are vulnerable to surprise attack. . . . No reliable U.S. early warning; our defense system is inadequate; therefore SAC is vulnerable and U.S. is open to surprise attack.” To prevent this, the committee recommended the expansion of a string of military radars and airbases along Alaska, Canada and Greenland to detect incoming Soviet bombers and missiles (the Distant Early Warning, or DEW line). But the best method of reconnaissance and early-warning, the committee concluded, were military satellites: “Intelligence applications warrant an immediate program leading to very small artificial satellites in orbits around the earth. . . . The ultimate objective of research and development on the large satellite should be continuous surveillance that is both extensive and selective and that can give fine scale details sufficient for the identification of objects (airplanes, trains, buildings) on the ground.” The CIA added, in its response to the committee’s report: “The small scientific vehicle is also a necessary step in the development of a larger satellite that could possibly provide early warning information through continuous electronic and photographic surveillance of the USSR. A future satellite that could directly collect intelligence data would be of great interest to the intelligence community.” Eisenhower’s science advisers told him that the US would probably have the ability to launch an artificial satellite sometime in 1956 or 1957.

But there was a problem. Under international law, every sovereign nation had control of its own airspace, which extended directly upwards from its borders. If the United States were to fly a satellite over the national territory of another country, even in outer space, it could be interpreted as an illegal intrusion into sovereign territory under international law, perhaps even an act of war. If the United States were to use satellites for surveillance and early-warning, it needed to find some legal justification to do so.

The justification that Eisenhower came up with was a principle called “Freedom of Space”. Outer space was, the US argued, not the same thing as airspace, but was more like the “international waters” law of the seas, which allowed the open oceans outside of territorial waters to be freely accessible to any nation (including its military vessels), and which any nation could utilize for “peaceful purposes” such as satellites for weather, communications, or (though it remained unsaid) unarmed surveillance. From this point on, the Eisenhower Administration focused its political efforts on having the doctrine of “freedom of space” accepted in international law so it could proceed with its military spy satellite program.

The first attempt to do this, failed. In 1955, at a summit with Soviet Premiere Nikita Khrushchev in Geneva, Eisenhower proposed what he called “The Open Skies Policy”, which would allow both the United States and the Soviet Union to freely and openly overfly each other’s territory as a means to prevent preparations for war and ease tensions. Not surprisingly, the Russians flatly rejected the idea.

Then, opportunity knocked. A consortium of international scientists proposed a joint project, to begin in July 1957, in which scientific teams from all around the world would make a simultaneous and concerted effort to study the planet Earth, in fields ranging from weather to geology to mapping to oceanography. It would be called the “International Geophysical Year”. In all, 67 nations participated. And both the United States and the Soviet Union announced that they would launch an artificial Earth satellite as part of the project.

For Eisenhower, the IGY project was a godsend. It not only gave the US a perfect cover for the development of military reconnaissance satellites and launch vehicles, but it would clearly establish the precedent of “Freedom of Space”, since any scientific satellite launched for the IGY would of necessity have to overfly any number of nations while in orbit. A National Security Council memo from 1955 noted: “The IGY affords an excellent opportunity to mesh a scientific satellite program with the cooperative world-wide geophysical observational program. The US can simultaneously exploit its probable technological capability for launching a small scientific satellite to multiply and enhance the over-all benefits of the International Geophysical Year, to gain scientific prestige, and to benefit research and development in the fields of military weapons systems and intelligence. The US should emphasize the peaceful purposes of the launching of such a satellite, although care must be taken as the project advances not to prejudice US freedom of action  . . . to continue with its military satellite programs directed towards the launching of a large surveillance-type satellite when feasible and desirable.” The National Security Council then listed what it saw as the benefits of utilizing the IGY project as a cover for its spy satellite work:

a. Preserves US freedom of action in the field of satellites and related programs.
b. Does not delay or otherwise impede the US satellite program and related research and development programs.
c. Protects the security of US classified information regarding such matters as the means of launching a scientific satellite.
d. Does not involve actions which imply a requirement for prior consent by any nation over which the satellite might pass in its orbit, and thereby does not jeopardize the concept of “Freedom of Space”.

The US already had a team of technicians working towards launching a satellite: in Huntsville, Alabama, Werner von Braun, the Nazi scientist who had developed the V-2 missile and who was now working for the US Army, had developed a multi-stage rocket based on the Redstone nuclear missile, which he called “Jupiter C”. It was capable of launching a small satellite called “Explorer”, and it could be ready within a few months. Instead, Eisenhower bypassed von Braun’s team and assigned the task of launching the American IGY satellite to a civilian research team, funded by the Navy, called Project Vanguard. Von Braun was stunned–he already had a reliable rocket launch vehicle and a workable satellite, he complained, while the Vanguard team was starting from scratch to build a completely new rocket vehicle, which would take many extra months. But von Braun was not aware that Eisenhower had other motivations that had nothing to do with space exploration: if the doctrine of “freedom of space for peaceful purposes” was to be established, the US could not use a US Army team with a military nuclear missile to launch the satellite. Instead, Eisenhower needed a civilian scientific team with a non-military research rocket, which Vanguard provided and von Braun’s Explorer team did not. That decision delayed the US satellite launch by over a year, and when the development of Vanguard was plagued by failures and technical problems, it allowed the Soviets to go first, launching Sputnik on October 4, 1957.In the press and the public, the launch of Sputnik caused a wave of hysteria, with much wailing that the Soviets had surpassed the US in technology and had gained a military advantage and the US was now in danger of nuclear bombs raining down from outer space. But Eisenhower, who knew from his U-2 flights that the Soviets barely had any capability to reach the US with nuclear weapons, was overjoyed by Sputnik. For several years, the US had been trying to diplomatically maneuver the Soviet Union into accepting the principle of “freedom of space” and agreeing to overflight of any country (including theirs) at will and without any permission or notice–and now the Russians had just established that precedent themselves. As one Defense Department memo triumphantly put it, “The Russians have done us a good turn, unintentionally, in establishing the concept of freedom of international space.” The United States could now launch its own unarmed reconnaissance satellites into orbit over the USSR, and the Soviets could do nothing legally or diplomatically about it.

The first American photographic spy satellite, known as “Corona”, was launched in 1959. It was joined a year later by twelve “Midas” early-warning satellites.

4 thoughts on “Space Race: Why the US Let the Soviets Win”