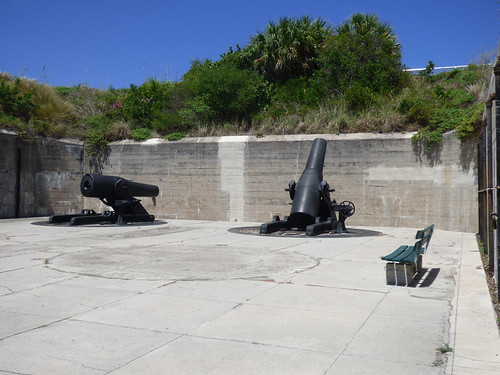 Inside the mortar pit at Fort DeSoto.

During the Spanish-American War, the US Navy began construction of a gun fort on Mullet Key, one of the islands in the mouth of Tampa Bay, to protect the entrance to the harbor. Today it is one of the most intact surviving coastal forts of the period.

In February 1849, after the Mexican-American War, the US Navy sent a team to find possible sites for a gun fort to defend the harbor at Tampa Bay, Florida. (One member of this team was Colonel Robert E Lee, who had been trained in military fortifications.) The Navy picked Mullet Key and nearby Egmont Key, at the mouth of Tampa Bay, and took possession of the islands. But by the time the Civil War began in 1861, construction on the proposed fort had not yet begun. Instead, as part of its “Anaconda Strategy” to choke off the Confederacy by blockading its ports, the Union Navy landed Federal troops on Mullet Key and Egmont Key, where they set up cannon batteries to control all the shipping in and out of the bay.

After the Civil War, plans were once again made for a fort on Mullet Key, but the project was now delayed until the outbreak of the Spanish-American War in 1898. Tampa was the primary port for sending soldiers and supplies to American forces in Cuba, and it was decided to protect the harbor from possible attack by Spanish warships. Construction of Fort DeSoto began in November 1898.

By March 1899, construction was being delayed by the lack of stone from quarries in New York, so it was decided to make the walls from a mixture of cement and local seashells. The fort structure was completed in April 1900.

The fort was made with several low flat areas where the guns were placed, surrounded in front by a thick cement wall and banked with sand and dirt walls up to 20 feet thick, designed to absorb gunfire from enemy ships. Because of delays, Fort DeSoto did not actually have any guns until 1902, when eight newly-designed M1890 M1 12-inch rifled naval mortars arrived. These could lob a 1000-pound explosive projectile almost 7 miles; as mortars, they fired in a high arc rather than a straight line, which allowed them to remain protected behind the thick defensive walls. The mortars were placed on steel carriages, which could raise the gun barrel to fire, then lower it to be reloaded. A number of 3-inch rifled guns were also placed around the base, and a battery of six-inch guns was placed on Egmont Key to cover more of the Bay’s entrance.

When the US entered World War One in 1917, Army troops were stationed at Fort DeSoto. New guns were added to attack any German U-boats attempting to enter the harbor, but during the war, Fort DeSoto never encountered any submarines and never fired a shot in anger.

In 1923, the defensive guns at Tampa Bay were no longer needed, and Fort DeSoto was abandoned. In 1940, as the US prepared for possible entry into World War Two, it was decided to use the now-abandoned site as a practice bombing range for trainees. Bomber crews from MacDill Army Air Force Base in Tampa would do practice runs across the Bay and drop dummy bombs filled with sand, and sometimes live ordnance, onto target markers on Mullet Key.

In 1948, the Army declared the island as “surplus” and sold it to the local government. After preservation work (and removing all the bomb remnants) was finished, Fort DeSoto Park was opened in 1963.

Today, the four 12-inch mortars on display at Fort DeSoto are the only ones remaining in the US, and Fort DeSoto has been placed on the National Register of Historic Places. The park also contains a bird sanctuary and several nature walks, as well as beach facilities.