The whales are the largest animals that have ever lived on earth. But the huge marine whales evolved from a small animal about the size of a large dog. And these earliest whales had four legs and walked on land. 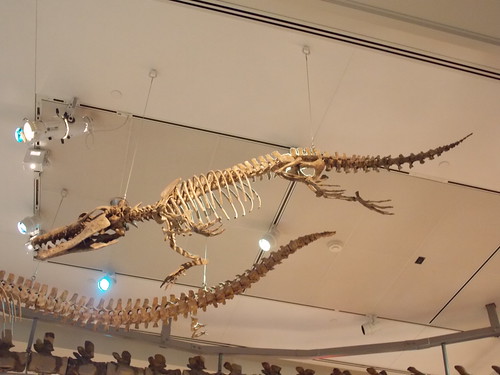 Ambulocetus skeleton on display at the Smithsonian Museum of Natural History

The first early whale fossil to be found was in the Zeuglodon Valley in Egypt. This was a specimen of Basilosaurus, an animal that had originally been uncovered back in 1834, first being misidentified as a marine reptile, then correctly identified as a whale in 1840. A number of specimens have been found with a femur, a kneecap, both lower leg bones, a number of ankle bones, and three toes, showing beyond any doubt that Basilosaurus had complete rear limbs: however, they did not connect to the pelvic bones, and could not have been used to support the animal’s weight out of the water. Basilosaurus, therefore, was a whale that still had rear legs, but was so adapted to a marine existence that it could no longer leave the water.

The earliest whale ancestor that we know of is a 52-million year old skull of a land-dwelling mammal, found in shallow deposits in Pakistan. Although fragmentary, the skull, namedPakicetus, had teeth that were nearly identical with those of the Archaeocete whales, and the configuration of the bones at the rear of the skull also matched the Archaeocetes. Pakicetus was, however, missing two important adaptations which are present in modern whales. In living whales, the ears contain large sinuses that can be filled with blood, allowing the animal to maintain pressure while diving. Modern whales also transmit sound vibrations to the inner ear using a “fat pad”, which allows them to hear directionaly underwater. Pakicetus lacked these features. Combined with the habitat it was found in (deposits that had been laid down at the mouth of a river on the shore of a shallow sea) this indicates that Pakicetus lived a mostly terrestrial lifestyle, something like an otter. While it likely hunted in the water and may even have had webbed feet to help it swim, it was not capable of deep dives and could not hear underwater.

In 1993, paleontologists found two new specimens of Indocetus, an early whale which lived in between the times of Pakicetus and Basilosaurus. The new bones showed that Indocetus had legs that were large and strong, in contrast to those of Basilosaurus, and was able to support its weight on land and leave the water. It probably lived something like a sea lion.

In January 1994, a spectacular find of several 49 million year old Archaeocete skeletons was announced, found in Pakistan. The most complete specimen contained parts of the skull and jaw, a number of vertebrae, some ribs, and nearly complete front and hind limbs. This whale had four large legs that were fully capable of supporting the animal’s weight on land, and were also capable of paddling it through the water using an up-and-down motion of its flexible spine, like a modern whale. The new species was called Ambulocetus natans (“the swimming whale that walks”).

Ambulocetus was about ten feet long and weighed something around 650 pounds. It had a very large head for its size, and a tail that was probably used for steering when swimming, propelling itself with its rear feet using an up-and-down motion. Although the legs were strong, the feet were not shaped well for walking, and Ambulocetus probably had to drag itself along on land with its front legs, like a sea lion. It seems to have lived along coastlines and tidal river mouths, and was probably able to make deep dives for food: it had adaptations in its nasal cavity that allowed it to swallow underwater like a modern whale.

Because of these fossils, we can now tentatively piece together the sequence of whale evolution. The earliest known cetacean ancestor, Pakicetus, was a typical land animal with four legs who spent much of its time swimming after food in shallow rivers. Later, Ambulocetus appeared, which was more adapted for hunting in water, but still had four legs and could move on land. After Ambulocetus, there is a trend towards increasing specialization for a totally marine existence. Indocetus still had legs and could haul itself out of the water onto shore, but spent most of tis time in the sea. When Basilosaurus arrived, only the hind limbs remained, and they were too small and weak to allow the animals to leave the water. Finally, the later Archaeocetes appeared which had no limbs at all and were completely specialized for a marine life. Taken as a whole, the Pakicetus-Ambulocetus-Indocetus-Basilosaurus series shows how a land mammal evolved over time into an aquatic whale.

So which group of land mammals are the whale’s ancestors? DNA analysis shows that the closest living relative of the whales is the hippopotamus, and that whales are therefore descended from a common ancestor with the hippo, from an ancient group of even-toed land mammals called anthracotheres. These looked sort of like a small multi-horned rhinoceros.