During his reign, the Egyptian Pharaoh Ramses II built an extraordinary number of monuments in his capitol city, Pi-Ramesse. In later centuries, Pi-Ramesse was abandoned and forgotten, lost in the sands of the desert for thousands of years. In modern times, the location of the lost capitol of Ramses II was eagerly sought by archaeologists. But when Pi-Ramesse was finally found, it was in the wrong place–a place that did not even exist at the time of Ramses. 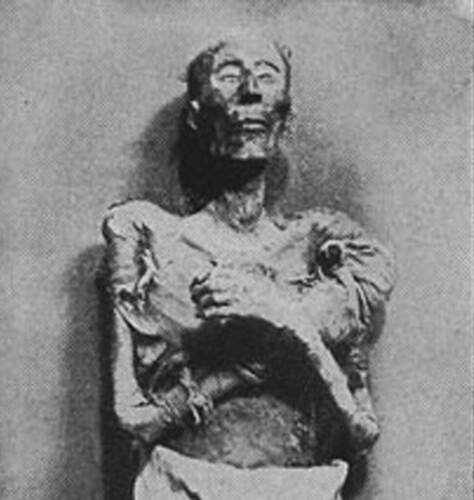 In 1279 BCE, the Pharaoh Ramses II inherited the throne of Egypt upon the death of his father, Seti I. He would rule for the next 66 years, one of the longest reigns in Egyptian history. In the military sphere, he would conquer new lands and expand Egypt’s empire. In the political sphere, he would rule over the peak of Egyptian power. In the cultural sphere, he would construct hundreds of monuments, temples and entire cities–most of them monuments to himself. It is even traditionally held that he is the “Pharaoh” of the Biblical story of Moses and the Exodus. History would come to know him as “Ramses the Great”.

Most of the previous Pharaohs had built their royal palaces near the commercial and political centers of Thebes or Memphis, but Ramses II, upon assuming power, decided to move the capitol to his boyhood home, a summer palace built by Seti I in the northern Nile Delta. Here, Ramses built an entire new city around his palace, complete with temples, monuments, obelisks, and living quarters for over 300,000 people. The city also contained a garrison with the bulk of the Egyptian Army, which at that time was engaged in nearly constant warfare with the Hittite Empire, a rival which was encroaching into Egyptian territory in Palestine. The city was known as Pi-Ramesse (“the House of Ramses”).

Three thousand years later, in the mid-19th century, the modern science of archaeology was born, and much of its focus was on Egypt. By the 1880’s, nearly all the significant cities of the ancient Pharaohs had been found and identified. But there was one city that remained undiscovered, one of the most important cities of all–Ramses II’s capitol of Pi-Ramesse.

In theory, it should not have been hard to find. Inscriptions on stone monuments built by Ramses clearly described the location of the city, on the easternmost branch of the Nile Delta. But there was an awkward problem–in the 3,000 years since the city was built, the Nile has moved, many times. As the Nile enters the flatland of the delta area, it slows down and becomes shallower, and dumps the enormous load of silt it has been carrying along. This silt is extremely fertile, and it was the delivery of this mud, through annual flooding, that made Egypt the breadbasket of the ancient world. But over time, this silt and mud also filled in the existing river channel in the delta, and on many occasions over the centuries, entire branches of the Nile were blocked by silt and changed course, sometimes drastically–or even disappeared entirely. Today, the Nile Delta has two large branches that empty into the sea, but in ancient times it had as many as four or five–and over the centuries there have been numerous branches that formed, flowed for a few centuries, then disappeared or changed course. In the 1880’s, therefore, there was simply no way of knowing where the easternmost branch of the Nile was in the time of Ramses II, and no way of finding Pi-Ramesse.

Then, in 1884, British Egyptologist Sir William Matthew Flinders Petrie arrived in the Delta and began excavating some finds near the city of Tanis, an ancient religious center founded on a branch of the Nile that had long since silted in and dried up (now known as the “Tanitic Branch”). Flinders Petrie did some preliminary digging, then left. But in 1929, the French archaeologist Pierre Montet arrived to restart the digging at Tanis, and what he soon found was a shocking surprise. Montet’s excavation uncovered a large city filled with monuments, obelisks, and temples, most of them bearing the royal mark of Ramses II. Montet concluded that he had at last found the long-forgotten city of Pi-Ramesse.

There was no doubt that the statues and monuments found by Montet at Tanis were indeed those made by Ramses for Pi-Ramesse–they all bore his royal mark. But in 1966 (the same year that Montet died), Austrian archaeologist Manfred Bietak began a study that would re-open the presumably-solved mystery of the capitol city of Ramses II . . .

Using aerial photos and contour maps of the Nile Delta area, Bietak was able to painstakingly trace the path of all of the previous branches of the river, including the ones that had disappeared and left behind only dry traces of riverbed. Once he had identified all the dozens of ancient pathways taken by the Nile in the past, he needed some way to date them–and turned to pottery. Over the thousands of years of the Egyptian Empire, pottery techniques had changed rapidly, with new methods of forming, glazing, decorating and firing pots appearing and disappearing. By comparing pottery fragments at a site with the known dates of similar pottery from other sites, Egyptologists could accurately date their finds, sometimes within an error span of only forty or fifty years. To complete his time-map of the Nile Delta, Bietak painstakingly searched along each ancient riverway, looking for the remains of ancient towns and settlements that he could date using the pottery fragments he found there. And since the towns were built along the water, the date obtained for the town also indicated when the Nile River had run through that spot. As a bonus, the number of pottery fragments also indicated the size of the settlement–big cities left many pottery shards, while small towns left only a few.

One of the river pathways that Bietak examined was the Tanitic, the branch on which Montet had found the remains of the Ramses monuments of Pi-Ramesse, and on that pathway, Bietak found pottery shards. But there was a problem. The pottery fragments did not date to the 13th century BCE, the time of Ramses II–they dated to the 11th century BCE, 200 years after Ramses II had died. Not only had the site at Tanis not been there at the time Ramses II was constructing his capitol, but neither was the Nile River itself. Montet had indeed found the monuments and temples of Ramses’s city–but he had found them in a place and time where Ramses could not possibly have built them. The city was in the wrong place.

Then the mystery deepened further. Using his map of ancient riverbeds and the dates he obtained for them from the pottery fragments, Bietak was now able to determine which of them was the easternmost branch of the Nile existing at the time of Ramses II. This turned out to be the “Pelusiac Branch”, which sure enough contained a spot where an enormous amount of pottery fragments from the time of Ramses were found; it was at the spot where the modern town of Qantir was located, on what was the ancient shore of the Nile. Here, Bietak realized, was the actual location where Ramses had built his capitol city–about 20 miles south from where the monuments of Pi-Ramesse were currently located.

Working with German archaeologist Edgar Pusch, Bietak began excavations at Qantir, and uncovered the remains of a large city, including ceramic-tiled buildings, a series of horse stables and an elaborate system of canals fed by the Nile. It was the remains of Pi-Ramesse. Sadly, the most opulent portion of the city, the Royal Palace of Rameses II himself, sits directly under the modern town of Qantir, where it cannot be excavated.

So how had the Rameses monuments, originally built at the site of Pi-Ramesse in modern-day Qantir, managed to get 20 miles away to a different site in modern-day Tanis that had not even existed at the time they were made? There was, archaeologists realized, only one logical explanation: some 150 years after the construction of Pi-Ramesse, the Pelusiac Branch of the Nile silted in and dried up, and the Tanitic Branch had formed. In response, the ancient Egyptian Pharaohs, unwilling to abandon their magnificent capitol city, instead did an extraordinary thing–when the Nile moved, they moved the entire city to follow it. Over a period of years, they disassembled all the monuments at Pi-Ramesse and carried them, one stone at a time, 20 miles away to the new site at Tanis, and rebuilt them there. The modern-day equivalent would be if Washington DC became uninhabitable for some reason, and the citizens of the US took down the Capitol Building, the White House, the Lincoln Memorial, and all the other monuments and state buildings, and moved them to Baltimore and rebuilt them.

Tanis then served as the new capitol for Egypt. The tombs of at least five different Pharaohs have been found there, some of them completely intact. But eventually, this branch of the Nile dried up too, the Pharaohs moved their palaces back to Thebes and Memphis, and the ancient capitol(s)–one city found in two different locations–became forgotten.