For 30 years, beginning in 1937, the Cunard passenger liner Queen Mary was the most elegant cruise ship afloat, serving as the unofficial flagship of British shipping, making a stint as a troop carrier in the Second World War, and finally retiring as a luxury hotel in California. This is the story of the Queen of the Seas. 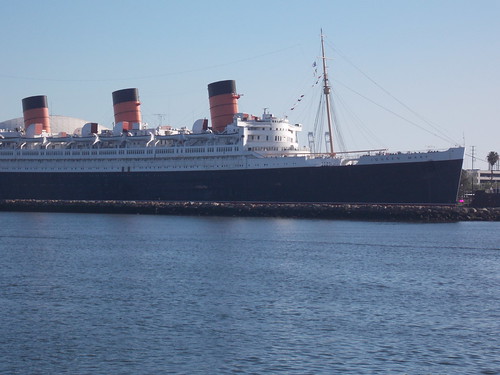 In 1902, the British Government was worried. American financier J. Pierpont Morgan had formed a company, the International Mercantile Marine, that was steadily buying up passenger ship lines, an industry that had traditionally been dominated by the British. Morgan had already snapped up the White Star Line, and seemed intent on next targeting the largest remaining British line, Cunard. Her Majesty’s Government considered it a matter of national pride that Britannia continued to rule the waves, in the civilian as well as military spheres, and so to keep Cunard in the game, the Exchequer guaranteed the company a loan of 2.6 million pounds to finance the construction of two new ocean liners that would maintain British preeminence on the seas. The liners were called Lusitania and Mauritania. They were the fastest passenger liners built to that time.

IMM’s White Star responded by commissioning three ships that, while not as fast as the Lusitaniaand Mauritania, would far outclass them in size and luxury. These were the Olympic, the Titanic, and the Britannic. Although IMM’s plans fell through when the Titanic and Britannic were the victims of tragic accidents, Cunard recognized the threat they posed, and in response launched the Aquitania in 1913. Though not as big as the Olympic class, the Aquitania was larger and more luxurious, though slower, than her Cunard sisters.

After the First World War, the trans-Atlantic shipping industry began to change. Previously, it had been the lucrative immigrant trade between Europe and America that provided the bread and butter for the shipping lines; while the glamorous first-class accommodations provided advertising and press coverage, it was the third-class steerage passengers who actually paid all the bills and made all the profit. But by the 1920’s the wave of immigrants was dropping off, and a new type of passenger, the “tourist”, was appearing, as middle-class Americans and Europeans, with new economic prosperity, were able to afford overseas vacation trips as a form of entertainment. Cunard, along with the other shipping lines, saw the need for a new class of passenger liners that could carry more passengers, in comfortable circumstances, and travel fast enough to guarantee a regularly-scheduled trans-oceanic voyage every week, and made plans for two new liners with a speed of 28 knots, to be named the Queen Mary and the Queen Elizabeth. Construction of the Queen Mary began at the John Brown shipyard in Clydebank, Scotland, in January 1931, but was halted in December as the Great Depression deepened. Once again, the British Government viewed the matter as a prestige project, and agreed to a 9.5 million pound loan to finance the construction of the Queen Mary and her sister ship–but only on the condition that Cunard and White Star merge to form a single British shipping company. Cunard became the largest passenger line in the world, and construction resumed on the Queen Mary. Her maiden voyage was in May 1936. And in December 1936, construction began on her sister ship, the Queen Elizabeth.

At her launch, the Queen Mary was one of the most advanced passenger ships in the world. Measuring 1,019 feet and weighing almost 82,000 tons, Queen Mary could travel at an average speed of over 30 knots, and carried over 2000 passengers. She was so big and expensive that insurers doubted she could pay for herself, and refused to insure her until the British Government agreed to guarantee her. After beginning her regular passenger runs, the Queen Mary quickly captured the Blue Riband Atlantic speed record from her major competitor, the French liner Normandie.

In September 1939, the Second World War broke out in Europe. The Queen Mary remained safely in port at New York, alongside the Normandie and, after her completion in March 1940, the new Queen Elizabeth. As part of the agreement with the British Government, the Admiralty retained the right to use the ships in time of war, and two weeks after the Queen Elizabetharrived in New York, the Queen Mary set sail for Sydney, Australia, where she was refitted as a troop carrier: she was repainted navy grey, fitted with small deck guns, and equipped with a new “degaussing coil” to protect her from magnetic mines. The Queen Elizabeth was also converted shortly later.

For the rest of the war, both “Queens” carried Australian and British troops around the world, up to 15,000 at a time. On several occasions, as the fastest ship in the Royal Navy, the Queen Marycarried British Prime Minister Winston Churchill overseas for wartime conferences and meetings. During the war, she suffered only one major incident, when, in October 1942, she accidentally rammed one of her anti-aircraft escort ships, the HMS Curacoa, off the coast of Ireland, sinking the destroyer. At another time, the Queen was hit by a giant “rogue wave” that hit her broadside, tilted her nearly 52 degrees, and came close to capsizing her. (News reports of this incident inspired author Paul Gallico to write his novel The Poseidon Adventure, about a capsized passenger liner, which would then be made–and re-made–into a major Hollywood movie). At the end of the war, the Queen Mary continued in the British Navy’s service, now returning American soldiers home from Europe. She was finally released back to civilian service in September 1947. During her wartime service, she had sailed over 600,000 miles, and had carried over 800,000 troops.

In 1952, the Queen Mary finally lost the Atlantic speed record to the new American liner USSUnited States. But by now, the ocean liner industry was changing yet again. As air travel between Europe and the USA became more reliable and more affordable, the “transportation” role of passenger liners began to fade. Instead, ocean voyages were becoming “cruises”, vacation trips in and of themselves. In 1958, the Queen Mary was refitted with modern stabilizers and was re-equipped as a cruise ship, making vacation cruises first to the Canary Islands, and then to other locations.

In September 1967, the Cunard Line, operating at a loss, decided to retire both “Queens”, replacing both of them with the single cruise ship Queen Elizabeth 2.

The Queen Elizabeth was sold to a businessman in Hong Kong who intended to convert her into a floating hotel, but during the work in 1972, she caught fire, burned, and sank.

The Queen Mary was sold to the city of Long Beach, California, for 1.2 million pounds. At the end of her final cruise, in December 1967, she was permanently docked at Long Beach, where she was converted into a floating hotel, restaurant, and museum, opening to the public in 1971. She remains there today.