It is about the same size as the more famous Barringer Meteor Crater in Arizona, but the Tswaing Meteor Crater, in South Africa, is almost five times as old. 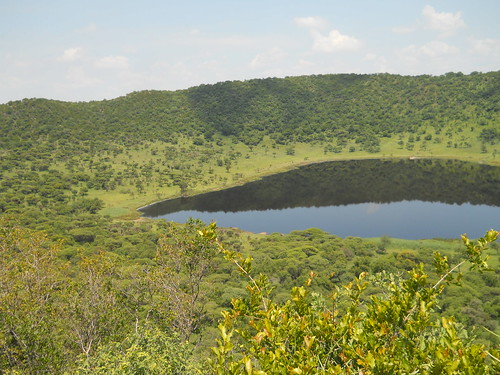 When we look at the pockmarked face of the full moon, it is easy to forget that, in its 4.5 billion year history, the Earth has also been cratered by at least as many meteorites as the lunar surface. But while on the airless moon each and every impact crater is perfectly preserved, forever, on Earth the processes of weather and erosion have destroyed nearly all of them. Only about 170 identified meteor impact craters remain on the Earth’s surface.

About 220,000 years ago, one of these occurred in what is now South Africa, about thirty miles northwest of the present capitol city of Pretoria. A stony chondrite meteor, probably a piece of an asteroid about 120 feet wide, hit the veldt landscape at 25,000 mph, releasing the energy of a 40-megaton nuclear weapon. The impact blew out a crater in the granite bedrock three-quarters of a mile across, almost 2.5 miles around, and about 600 feet deep. The rocks at the edge of the crater were crushed and melted together into a concretion called “breccia”, with the layers folded up and out to a height of 180 feet and huge chunks of ejected debris scattered outwards for miles.

The meteorite itself was instantly vaporized by the impact, and anything within 2 miles of the site would have been burnt to ash as well by the heat from the fireball. As the shock wave blasted outwards at 600 mph, it would have flattened everything within 100 miles of the crater.

Over the next 200,000 years, the crater was weathered by rain, and sediments built up in the crater floor to a depth of almost 300 feet. As rainwater ran down the inside of the crater rim and into these sediment layers, it dissolved minerals and salts out from the rocks, then gathered to form a lake at the bottom of the crater about 300 feet wide and about ten feet deep. Since there was no outlet for this water, the salts continued to become more and more concentrated as more minerals washed in and the water continuously evaporated, turning the shallow alkaline lake water into a heavy brine with a high concentration of salt and soda compounds.

In the hot dry South African interior, salt is a precious commodity, and when Stone Age humans found the lake some 100,000 years ago, they began making regular trips here to make salt by evaporating the water, leaving behind their Middle Stone Age tools. When the first European settlers in South Africa reached the area in the 1860’s, they found the local Iron Age Tswana and Sotho people still making salt at the lake, which they had named Tswaing (“place of salt”). In 1912, a group of white Afrikaner settlers established the South African Alkali Company to mine Tswaing Lake for its alkaline soda crystals and its mineral salt. The company built a small pumping station on the lake’s edge and ran the lake water through a pipe that climbed over the crater rim to a small installation where it was evaporated.

When the salt began to run out and the water became less concentrated, the company became unprofitable and shut down in 1956. The Tswaing area then became an experimental cattle ranch called Zoutpan (“Salt Pan”), where different methods of herding and farming were tested.

During this time, there was a scientific debate over Tswaing. The first geologist to study the crater, Percey Wagner in 1922, concluded that it was the weathered remains of an old eroded volcanic outlet. But then in 1933, Tswaing was studied by the German geologist H.P. Rohleder, who had just finished studying the meteor impact crater at Steinheim in Europe. Rohleder found enough similarities between Steinheim and Tswaing to conclude that the South African site was also an impact crater, but his conclusions were not widely accepted: at the time, meteor impacts were thought to be impossibly rare events.

The debate was finally settled in 1992, when geologist Wolf Uwe Reimold studied samples from a 1989 geological rock core that had been drilled 200 feet down through the floor of the lake to the granite bedrock. He found crystals of shocked quartz and melt glass produced by impact, conclusively demonstrating that Tswaing was a meteor crater and not volcanic. A few years later, chemical analysis of the core indicated that the meteorite had been a stony chondrite–a bit unusual since most craters were caused by iron meteorites.

In 1992, as the Apartheid government of the Afrikaners was being dismantled, the experimental ranch at Tswaing closed, and the area around the crater was taken over by the South African National Cultural History Museum. A Visitors Center was constructed and a hiking trail established which runs around the rim of the crater. Today, Tswaing is a Conservation Area managed by the South African national government, the provincial government of Gauteng, and the local City of Tshwane. It is on the list of sites to be considered for designation as a United Nations World Heritage Site.