In February 1920, a distraught young woman attempted to commit suicide by jumping from a bridge into one of Berlin’s canals. She was rescued by onlookers and was taken to a mental asylum, where she made an extraordinary claim–she was the Grand Duchess Anastasia Romanov, the youngest daughter of Nicholas II, the last Tsar of Russia. 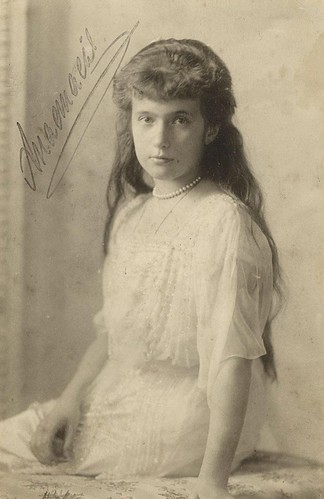 The Russian Revolution in March 1917 had deposed the government of Tsar Nicholas II and replaced it with an elected Provisional Government. In November, the Bolsheviks under Vladimir Lenin seized power, and civil war broke out between pro-Communist and anti-Communist forces. To prevent the deposed Tsar from being freed by loyalist troops, Lenin made the decision to execute the entire royal family, and on July 16, 1918, the Tsar, his wife, his son and heir to the throne Alexei, and his four daughters were all shot.

But now, the young woman rescued from a canal in Berlin was telling a different story. She was, she announced, Anastasia Romanov. During the execution, she declared, she had only been wounded, and was rescued after the shooting by one of the Bolshevik soldiers, named Alexander Tchaikovsky, who nursed her back to health and smuggled her to Bucharest, where she lived with him under the name Anna Tchaikovsky. But a year later, Alexander Tchaikovsky was killed (perhaps by a death squad from Russia), Anna’s child was taken to an orphanage, and, desperate and broken, she fled to Berlin, where she had tried to kill herself.

Anna’s claim provoked a furious controversy, as former Russian aristocrats divided over whether she really was who she now claimed to be. She did closely resemble photographs of the Grand Duchess Anastasia, but unlike the real Anastasia she spoke no Russian (her supporters explained this by declaring it a partial amnesia caused by her trauma). Detractors claimed Anna was financially motivated–as the last heir of the Tsar, she stood to inherit the enormous royal fortune if her claim was upheld. Anna (now living under the name “Anna Anderson”) refused to talk in detail with any of the living members of the Russian royal family, although she did talk briefly with a few. Some were convinced that she knew details of the Russian court that only an insider would know; others were equally convinced that Anna was just an imposter.

In three separate court cases, Anna Anderson attempted to prove she was the heir to the Russian Tsar. None ruled in her favor. Anderson died in February 1984.

In the Soviet Union, meanwhile, Russian historians in 1979 had actually found the spot where the royal family’s bodies had been buried, and in 1994, DNA testing confirmed that they were the bodies of Tsar Nicholas II and his family. But intriguingly, two of the skeletons seemed to be missing: Alexei’s and Anastasia’s. Historians discovered that after the executions, the Bolsheviks had tried to destroy the bodies by burning them, and started with the two smallest corpses–Alexei and Anastasia. They were burned to ashes. But then the Soviet officials decided that this process was taking too long, so they soaked the remaining corpses with acid and buried them in a mine shaft.

As for Anna Anderson, DNA testing settled her story, too. In 1993, researchers found a number of tissue samples that had been taken from Anna Anderson during an operation in 1979, and these were compared to DNA samples from living members of the Romanov family. The results were conclusive–Anna Anderson was not related to the Russian Tsar.

At the same time, the DNA was used to test an early hypothesis about Anna’s true identity. As early as 1927, researchers into the matter had known that a Polish housewife named Franzisca Schanzkowska had been reported missing in Berlin on the very day that “Anna” was rescued from the canal, and suspicions were raised that the “Grand Duchess Anastasia” was actually Franzisca Schanzkowska. To test the hypothesis, the DNA sample from Anna Anderson was tested against living relatives of Schanzkowska. With a certainty of 99.6%, they were found to match.