In the first years of the 20th century, two wealthy Boston society women led a boycott that helped save dozens of American water bird species from extinction. 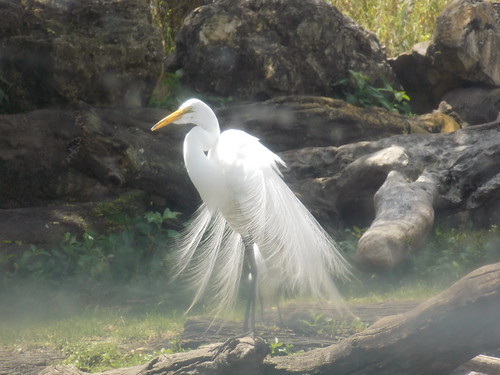 An Egret and its showy feathers.

In the years after the Civil War, high society ladies in Europe and America were swept by a fashion craze–the plumed hat. At first, women’s hats were decorated rather simply, wide floppy brims with a few long colorful feathers, perhaps with some ribbons or flowers. Over time, however, the display became more elaborate, and soon entire birds were being stuffed and mounted atop women’s hats, often rigged with wires so the wings would flap in the breeze. The hats were often accompanied by accessories such as feather fans. Such ostentatious displays not only attracted attention to the young society ladies, but the huge unwieldy pieces also demonstrated in an unmistakable way that the hat’s possessor was wealthy enough to not have to work.

One day an ornithologist named Frank Chapman, from the American Museum of Natural History, counted the number of bird species he saw in the ladies’ hats during an afternoon walk in downtown Manhattan, and found 540 examples of 40 different species, including bluebirds, woodpeckers, orioles, blue jays, terns, grackles, buntings, owls, peacocks, ostriches, pheasants, Brazilian blackbirds, herons, and entire hummingbirds. In all, about half of all the bird species in the US were being hunted, to a greater or lesser extent, for their feathers, and some five million birds a year were being killed. The millinery business was worth over $17 million (over $400 million in today’s dollars) a year.

But by far the favorites were the long feathery white plumes of Egrets, especially springtime adults in breeding condition. Plume hunters raided the Egret breeding areas in Florida for the precious feathers, which at $32 an ounce (over $750 in today’s dollars) were literally more valuable than gold. Rookeries with 2-300 breeding pairs were wiped out, as hunters killed and plucked the adults and left the nestlings to die. The feathers were shipped to fashionable millineries in New York, Paris, and London. In a single auction in London in 1902, 1608 packages of feathers from Snowy Egrets and Great Egrets were sold at auction, representing about 193,000 individual birds. It has been estimated that some 95% of all Florida egrets and herons were wiped out by the plume hunters. They were on their way to extinction, and they were not the only ones–Florida’s ibis, spoonbills, plovers and pelicans were also being relentlessly hunted. In a desperate attempt to save these species, ornithologists at the New York Zoological Society, the Museum of Natural History, and the Smithsonian spoke out against the slaughter. In 1886, the American Ornithological Union formed a “Bird Protection Committee”, and in London, the Royal Society for the Protection of Birds began to speak in favor of conservation laws.

In 1896, Harriett Lawrence Hemenway, the wife of a wealthy shipping magnate and a matron of Boston high society (they had donated the money for the Hemenway Gymnasium at Harvard), read a magazine article about the plume trade, and decided to act. Over tea with her younger niece Minna Hall, the two drew up an invitation to their fellow Boston society ladies to a gathering, at which they pleaded for an organized boycott of plumed hats to save the birds. During this time, the conservation movement in the United States was just beginning–the plight of endangered animals like the passenger pigeon and the bison had inspired movements to save them, and the US National Park system would soon be formed, with Yellowstone National Park as its first wildlife and nature refuge. The Boston matrons formed the “Boston Audubon Society”, with about 900 members, which was quickly joined by other branches around the US to form the National Audubon Society. The Society’s stated purpose was, “To discourage buying and wearing for ornamental purposes the feathers of any wild bird, and to further otherwise the protection of our native birds. We would awaken the community to the fact that this fashion of wearing feathers means the cruel slaughter of myriads of birds, and that some of our finest birds are already decimated.” Although the leadership positions of many Audubon branches were men, women made up about 80% of the organization’s membership.

The organization used classic grassroots tactics. Boycotts were called on retailers who sold plumed hats, and “white lists” were distributed of bird-safe hat shops. Speakers were sent to society gatherings, clubs and other groups, traveling libraries were established to educate people about birds, and schoolteachers were recruited to teach children about the birds’ plight. They printed pamphlets and passed out leaflets. “The origin of the trade,” declared one pamphlet, “is ignorance on one side and greed for money on the other, and there is not one true word which can be said in its defense.”

As the Audubon Society’s membership grew, so did its political strength, and by 1900, five states had passed laws either outlawing or restricting the sale of bird plumes. Florida passed a law in 1901 (but the hunting still continued illegally, and three game wardens were killed between 1902 and 1906). In 1900, the US Congress passed the Lacey Act, which made it illegal to transport bird feathers that had been illegally taken from the wild. By 1905, 33 states had laws restricting or banning the feather trade, and in 1911 the feather trade was banned in New York, a crippling blow to the industry. In 1913, the Weeks-McLean Act was passed by Congress, outlawing the capture, import or sale of bird feathers for fashion purposes. President Teddy Roosevelt set aside 51 areas as Federally-protected wildlife refuges, to protect the bird breeding grounds and rookeries (and the Florida Everglades would soon be established as a Federally protected area). Finally, in 1918, the Migratory Bird Act was passed which outlawed the capture or sale of nearly all the wild birds in the US.

Today, America’s water birds are legally protected, and have made an impressive recovery, saved from near-extinction by two wealthy ladies over tea.