They are one of the most popular household pets in the US today, and served humans for thousands of years as agricultural pest controls. But it was only recently that scientific findings have allowed us to trace the history of the house cat. 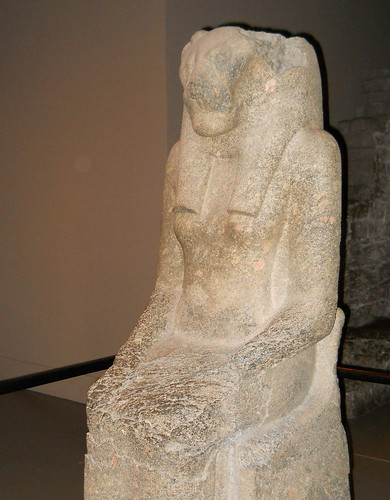 Archaeologists have long known that the domestic cat (Felis catus) was widely kept in ancient Egypt in the second millenium BCE. But the origin of cats before then was a mystery. Most researchers concluded that the domestic cat had first appeared in or near the ancient Fertile Crescent in present-day Iraq, either from the European wild cat or the Middle Eastern wild cat. But a sizable minority argued instead that the house cat had been domesticated in China, from a small species like the Chinese Desert Cat, and spread out to the Near East from there.

The earliest known skeletal evidence of house cats are found on the island of Cyprus. In 1983, a cat jawbone, showing the skull shortening associated with domestication, was uncovered there dating back 8,000 years. In 2004, another site was found from 9,500 years ago, in which a cat had been buried alongside a human. Since there are no cat species native to Cyprus, it must have been domesticated earlier somewhere else and been deliberately brought to the island by humans.

Recently, the science of genetics has shed light on the question. By sequencing the DNA of 979 different cat breeds from all over the world, including wild species, biologists were able to determine which geographical breeds had the greatest genetic diversity and which therefore have been evolving the longest. It turned out that those breeds native to the Middle East are the oldest, and their closest wild match is the Middle Eastern Wild Cat, Felis sylvestris lybica, native to the area from northern Africa to Turkey.

It is therefore most likely that the house cat was first domesticated in the agricultural city-states of ancient Mesopotamia, in modern Iraq, though it remains possible that this occurred in southern Turkey or in northern Africa, including Egypt.

By estimating the rate at which mutations occured in the cat genome, the geneticists were able to estimate that the DNA break between Middle Eastern Wild Cats and domestic cats happened sometime around 12,000 years ago. (The DNA also showed that the Middle Eastern Wild Cat itself split away from its wild relatives in Europe, South Africa, Central Asia and China about 130,000 years ago.)

It will likely never be known for sure how cats were domesticated, but the most popular hypothesis is that cats more or less domesticated themselves, when Wild Cats began hanging around human agricultural settlements to prey on the rodents and birds that were attracted to the stored grain. The humans tolerated the cats as long as they removed the pests, and the cats gradually adapted themselves to tolerating the humans. Biologically, the domestication followed a process known as “infantilization”–domestic cats began to retain some of their juvenile traits into adulthood, both physical (larger heads, shorter jaws, bigger eyes) and social (increased sociability and a less solitary and more docile disposition). In essence, adult Wild Cats became more like kittens, and began to view humans as if we were their mothers.

From their origins in the Middle East, cats spread. Skeletal remains show that they had reached China by 3000 BCE. Chemical analysis of the bones indicated that they were feeding on rodents that had eaten millet, an important agricultural grain. The Chinese were likely keeping the cats for pest control.

By the time of the Pharaohs, cats were widely kept in the Egypt, the superpower of its time. Like many other animals (ibis, crocodiles, jackals) the cat was viewed as a representative of the gods, particularly the goddess Bastet, who was depicted with the head of a cat. Cats were deified by priests and were often mummified and placed into tombs as symbols of divine favor.

When the Roman Empire took over Egypt in 31 BCE, domestic cats made their way to Italy and spread from there to the rest of the Roman Empire, where they found favor as natural pest control systems in agricultural villages. These were not house pets–cats were semi-wild and lived outside, mostly fending for themselves by killing rodents and birds. When Europeans invaded the Americas, cats went along with them; there were cats on Columbus’s ships, and also on the Mayflower.

But the cats did have a rough time of it in Middle Ages Europe. In a time of superstition and of political domination by the Church, accusations of “witchcraft” were usually fatal, and cats were widely viewed as “familiars”–satanic companions to witches. In the 14th and 15th centuries, huge numbers of cats were systematically hunted down and killed (which, unknowingly, allowed the rats to thrive and spread their plague-infected fleas to the humans, resulting in the Black Death). It wasn’t until the late 17th century, when the power of the Church faded, that European cats were once again given a reprieve.

As agriculture began to give way to industrialization in Europe and North America in the late 19th century, the position of cats began to change. Now they were no longer simply utilitiarian pest control devices. They became household pets, kept for their companionship rather than their mousing services. As with dogs, the aristocratic class began to selectively breed cats into different varieties based solely on their looks. The first cat show was held in Madison Square Garden in New York in 1895.

But these pets were not yet indoor cats. Although pet housecats were welcomed inside (and the kitty-door was invented to allow them to enter and exit as they pleased), it was not practical for most people in the early 20th century to keep indoor cats. Unlike domestic dogs, which can live on an omnivorous grain-based diet, cats are strict carnivores, and since it was impossible for most people to provide or keep extra fresh meat or fish to feed their cats, it was expected that pet cats would simply wander around outside and feed themselves, on rural neighborhood mice and birds.

It wasn’t until the 1950’s that two inventions–cheap household refrigeration and cat litter–made the fulltime indoors pet cat possible. Kitty litter and boxes allowed cats to be kept in sanitary odor-free conditions without the necessity of going outside, and refrigerated canned cat food made cheap readily-available meat diets available.

One other improvement remained–in the 1970’s, surgical procedures to spay and neuter cats became reliable and affordable. Before then, male housecats, once they reached maturity, became stinky smelly companions who sprayed all over the house, and female cats became loud yowling annoyances whenever they came into heat. And of course spaying and neutering also helped control the problems of unwanted breeding.

Genetics, of course, has not yet caught up with these technical advances, and many cats today will object stubbornly to being kept inside–their natural instincts are still to roam and hunt. But we no longer live in the agricultural landscape that domestic cats evolved in, and feral or roaming pet cats now do tremendous damage, by killing huge numbers of birds and small animals (on many islands, introduced feral cats have driven rodent and bird species to extinction). For that reason, today we encourage cat owners to spay and neuter their pets, and to keep them inside.

4 thoughts on “Pooties: A History of the House cat”