Florida is the land of invasive species. Because of our status as a center for the importing of exotic pets and houseplants from overseas, and our neo-tropical climate, we have been invaded by everything from kudzu plants to Burmese pythons. And one of our invaders is a seeming impossibility–a fish that breathes air and walks on land. 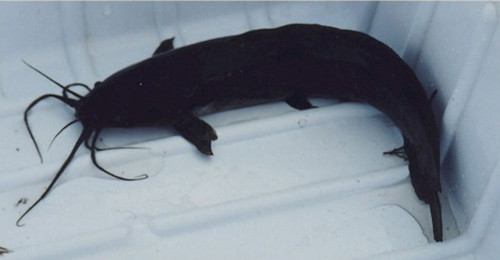 OK, so the Walking Catfish, Clarias batrachus, doesn’t actually have legs and doesn’t really walk. But it is pretty good at scrambling across dry ground on its fins, it can gulp air to breathe, and it has invaded Florida.

The Clariid family contains about 100 different species of catfish, organized into 14 different genus names. All of them are freshwater fish, and they can be found in many areas of Africa and southern/southeastern Asia. They are inhabitants of stagnant pools and shallow slow-moving streams, where they dine happily on smaller fish and invertebrate prey as well as aquatic plants and organic matter strained from the bottom muck. During the dry times of the year the stagnant ponds inhabited by the catfish often dry up and disappear, leaving the fish high and dry. As a result, they have become adapted to moving overland in search of a new pool. By gulping air into a specially-modified pouch in their gill arches, they are able to breathe out of water for as long as their gills stay wet, and by holding themselves up with their muscular pectoral fins and wiggling like a snake, they can travel over land in search of a new home. This has given them the name “Walking Catfish”. Their ability to breathe air also allows them to live in warm shallow oxygen-poor water where other fish cannot survive. And in really hard times, they can bury themselves in the mud and estivate until the waters return. They can go up to four months without food.

Because they are large fish (2-3 feet) and are easy to catch, they have long been valued as a food source. In Africa, the species Clarias gariepinus is commercially farm-raised in shallow concrete ponds. In Southeast Asia, several species are caught for food; in Thailand they are called pla duk nam, in the Philippines they are known as hito, and in Malaysia as keli. In Java, the local species is Clarias batrachus, known locally as leleh.

Although they are not particularly attractive fish, being mostly a dull brown or black color, the Walking Catfish became somewhat popular in the aquarium trade in the 1960’s, and a number of species were imported as pets, mostly C. batrachus from Thailand and Java. In response, tropical fish breeders in Florida established small breeding colonies to supply the pet industry, and a few people established commercial fish farms to raise the catfish as food. Unfortunately, one of these aqua-farmers, in Palm Beach County, had some escapes when their breeding pond was flooded, and another group of Walking Catfish found their freedom when a truck carrying them to Miami was involved in an accident that broke open their shipping container and allowed them to squirm off into the woods. In 1967, after other nations began reporting problems with introduced Walking Catfish invasions, the state of Florida decided to ban the import and possession of the fishes as a precaution–which led to a commercial aquarium breeder in Tampa illegally dumping his adult fish into the nearby Hillsborough River.

In all three areas, the escaped/released fish found Florida to their liking. Within ten years, they had spread to 20 counties in southern Florida, and the three separate established populations had merged into one large group, covering the entire peninsula from Tampa Bay south to the Everglades. The many interconnected ponds and canals in Florida allowed them to spread rapidly, helped along by their ability to walk across roadways and suburban lawns in search of new bodies of water. Today, in some parts of Florida, there are as much as a ton and a half worth of Walking Catfish per acre of wetland.

Initially, it was feared that the voracious invaders would make quick meals out of Florida’s many native fish, but for some reason the Florida populations of Walking Catfish seem to be satisfied with the life of a scavenger rather than a predator, and tend to eat mostly detritus and small invertebrates. They also tend to prefer oxygen-poor ephemeral ponds and ditches where other fish are not found. So, fortunately, damage to Florida’s native fish species does not appear to be very great. They do seem, however, to have a predilection for farm fish, and Walking Catfish often invade commercial Tilapia farms and make meals out of the inhabitants. Aquaculturalists in south Florida have to put fences around their ponds to keep the invaders out; the catfish cost the Florida fish-farming industry millions of dollars a year in additional expenses and losses.

So far, the temperatures north of Tampa Bay seem to be too low for the fish to tolerate, and their spread seems to have halted. The Walking Catfish are also found in some other states where they have escaped or been dumped, including California, Arizona, Georgia, Connecticut and Massachusetts, but they are not reported to be breeding there. (The Federal Government has now banned Walking Catfish everywhere in the US.) In Florida they breed at one year of age, at a length of around 12 inches, the males making nests from vegetation in shallow water and guarding the eggs and newly-hatched young. In their native Southeast Asia C batrachus can get up to two feet in length, but in Florida they rarely exceed 12-14 inches.

The introduced catfish have become a favorite prey for many of Florida’s egrets and herons.  Large numbers of the nocturnal fish are also squashed while trying to cross roads, particularly during mass movements from pond to pond on rainy nights. In some areas, immigrant populations from Asia catch the catfish for food.

Although the Walking Catfish has not done as much damage to Florida aquatic life as was first feared, it is still considered an undesirable invader. But because it is tough and adaptable, state officials have pretty much accepted the fact that the “fish that walks” is probably here to stay.

And now it is your turn–what’s going on in your neck of the woods?  Seen any fish walking across your yard lately?  🙂