Most baseball fans have probably heard the story: as a young college student in Cuba, Fidel Castro was approached to play professional baseball in the United States, but never made it. It’s a story involving history, politics and ideology.  But is it true? 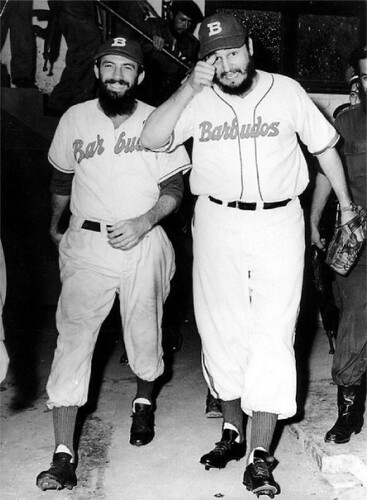 There are various versions of the story: In the 1940’s, law student Fidel Castro was a left-handed pitcher for his college baseball team (usually given as the University of Havana, but also sometimes as Belen College). He was so good that he attracted the attention of scouts from the US Major Leagues. In one version of the story, a scout reported of Castro:“Lots of enthusiasm, not much of an arm. Suggest he go into another business.” In another version, though, various teams were said to have sent some players down for a batting practice to test him (during one of which Castro struck out future Hall-of-Famer Hank Greenberg). According to some versions, Castro was offered a tryout with either the Pittsburgh Pirates, the Washington Senators, or the New York Yankees, but failed to make the cut–and, in bitterness and resentment, became intensely anti-American. In another version, he was actually accepted by the New York Giants in 1949 (or in 1951) and was offered a contract, but turned down the offer to get his law degree and go into politics instead.

Thus, the “alternative history” fans declare, the history of the 20th Century was changed because of a baseball scout. If Castro had played pro baseball in the US instead of going into politics, it is said, the Cuban Revolution would not have happened, there would have been no Soviet presence in Cuba and no Missile Crisis, Lee Harvey Oswald (a pro-Castro activist) would not have killed President Kennedy, the Vietnam War would not have happened, and the world today would be a different place.

It’s an intriguing story, but is any of it actually true…?

One part, at least, is known for a fact: Fidel Castro did pitch in at least one game for his intramural Havana Law School college baseball team. There is one box score that was published in the sports page of the Cuban newspaper El Mundo on November 28, 1946, showing “F. Castro” pitching (and losing) for the Law School against the Business School. But Fidel Castro’s baseball career (such as it was) seems to have been very short-lived: there is no evidence that he ever played in any other game, and no team photos have ever been produced from any Cuban baseball team of the 40’s with Fidel as a member. It is likely that he played at most a few games, bombed, and dropped out. So, although the US Major Leagues did indeed send scouts to Cuba to check out the college players (as they did with every other Latin American country as well, where baseball has been hugely popular since the 1920’s), they likely never even heard of “Fidel Castro”.

So where did the rest of the story come from? Well, the fact that there are several different versions, all of them conflicting, is the first indication that we are dealing with a myth, not with actual history. Most of the elements are humorous and apparently meant as political jokes: the idea of the most famous Communist dictator in the world playing for the “Senators” or the “Yankees”, for instance. Fidel Castro is not even left-handed, so even that part seems to be a political play on him being a “leftist”. There is also the “American Exceptionalism” myth in play, in which any social or political criticism of the United States is airily dismissed, including Castro’s, waving it all away by declaring that he was just pissed off because he couldn’t play baseball in the US.

But what about those photos of Fidel in a baseball uniform? In every story about the “Fidel baseball” legend (including this one), you are likely to see photos of Fidel in uniform for a team called “Barbudos”, presumably photographic proof of his days as a hot young pro baseball prospect. But the real story is different.

In the 1950’s, the American Major Leagues had a Triple-A minor league farm team, for the Cincinnati Reds, in Cuba, under the name “Havana Sugar Kings”. The Sugar Kings were consistently at the top of the International League rankings and were a source of Cuban nationalistic pride. So when Castro took power in January 1959, he took steps to promote and protect the team, which was deeply in debt (and which would be cut off from the US Major Leagues in 1960). Castro formed an exhibition team made up of government officials (all former guerrillas) that would play before scheduled Sugar Kings games to raise money for the AAA team. The exhibition team took the name Barbudos, Spanish for “the bearded ones”–the nickname given to the anti-Batista guerrillas during the revolution. It was never an actual league team, it never played any games against any league team (all of its games were played against another exhibition team from the National Police), and it only lasted for a short time. Fidel himself only played in one game, on July 24, 1959, when he pitched one inning (he struck out two and gave up no runs). The Sugar Kings went on to win the International Championship for 1959.

It’s not known how the “Fidel as American baseball star” myth first began. But by 1964 it was widely-enough known and believed that in June 1964, a story appeared in Sport Magazine titled “The Day I Batted Against Castro”, written by Pirates star Don Hoak along with Pittsburgh Steelers announcer Myron Cope. According to Hoak’s story, in 1951, before he had joined the Major Leagues, he was playing in Cuba as part of the winter leagues there when, during a game between the Cienfuegos and Havana teams, a group of radical students from the law school who were protesting the dictatorship of Fulgencio Batista ran out and took over the field while Hoak was at bat, declaring that they wanted to play against the American yanquis. A law student named Fidel Castro took over the pitcher’s mound, and, according to Hoak’s story, fired several wild pitches at him before being removed from the field by the Park Police. There is, though, no evidence from anywhere that the incident ever actually happened, and plenty of evidence that it did not–Batista was not in office in the winter of 1951, and records showed that Hoak was not a member of the Cuban league that year. Hoak was in Cuba with the winter leagues in 1953–but at that time Castro was in jail for his attack on the Moncada Barracks. The entire story is charming myth, but not true.

In May 1989, the myth was expanded. Up until now, the story had always been that Fidel had tried out for an American team, been rejected, and as a result became a bitter anti-American. But, in an article for Harpers Magazine, writer David Truby presented a different story: now, it was claimed that Castro had not only been scouted by the New York Giants, but had been offered a contract along with a $5000 signing bonus. Truby quoted from glowing scouting reports (which only he had apparently seen) declaring the future Cuban dictator a “star pitcher for the Havana University baseball team” with a particularly good fastball and curve ball. According to Truby, Castro thought about the Giant’s offer for several days, but in the end, after consulting with his friends in the radical student movement, he decided that he didn’t want to work for the American imperialists, and rejected the contract. Castro was, Truby reported, the only Latin American to turn down an offer from the Major Leagues. But once again, the story seems too good to be true. There are no records of any scouting reports on Fidel Castro, and no indication that he had ever been offered a contract by the Giants or anyone else. The entire story is made up (or, more politely, a work of fiction).

But the story about Castro almost playing pro baseball in the US (in its various versions) has now become so widely believed that it is part of baseball lore. The myth was repeated in 1995 in a scholarly historical article on Cold War history by former US Senator Eugene McCarthy: “Among the early finds by Washington Senators scouts [was a] prospect named Fidel Castro. He was turned down because he didn’t have a major league fastball. But an aspiring pitching ace spurned can be a dangerous man with a long memory.” Today in 2014, in a display of the largest private collection of autographed baseballs in the world, the baseball signed by Fidel Castro carries an informational sign that repeats the myth about the New York Giants trying to sign him. The myth has even found its way into otherwise legitimate histories of baseball, by several different authors.

Alas, it is simply not true. Fidel Castro was never scouted by the Major Leagues and was never offered a contract or a tryout. It’s a great story, but it is just a story. 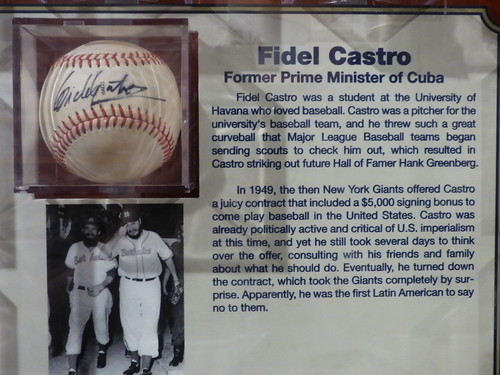 Baseball autographed by Fidel Castro on display, repeating the myth.