In February 1942, President Franklin D Roosevelt issued Executive Order 1066, authorizing the forcible relocation to detention camps of all people of Japanese descent who lived along the Pacific Coast. It was a shameful event in US history. But few people today remember the incident that sparked the internment policy, which involved a Japanese pilot who had been shot down during the Pearl Harbor attack. 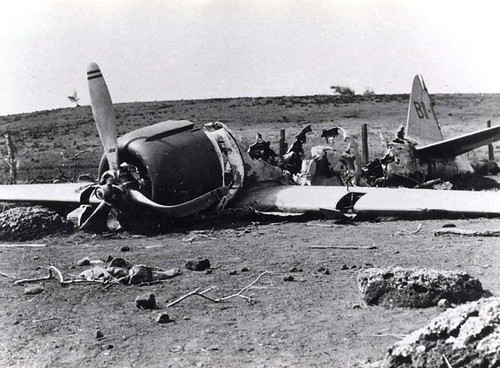 On December 7, 1941, Airman First Class Shigenori Nishikaichi was piloting an A6M2 Zero fighter from the carrier Hiryu, escorting a group of dive bombers from another carrier, the Shokaku, as part of the second attack wave. Their assigned target was Bellows Field, an Army airbase near Pearl Harbor. The second wave did not have the advantage of surprise that the first wave had, however, and as they regrouped after their strafing runs, Nishikaichi’s group was jumped by a flight of American P-36 Hawk fighters. The P-36s were obsolete and hopelessly outclassed by the Zeros, and all of them were quickly driven off. But in the dogfight, Nishikaichi’s fuel tank was punctured by a bullet and began leaking fuel, and as the group left to return to the Hiryu, Nishikaichi realized he would not be able to make it back.

The Japanese had made contingency plans for damaged aircraft. If unable to return to their carriers, Japanese pilots were to make their way to the small island of Niihau and land on the beach there, to be picked up later by a rescue submarine. Nishikaichi turned his crippled Zero towards Niihau.

But when he flew over the island, he saw that the Japanese intelligence had been mistaken–contrary to their information that the island was uninhabited, Nishikaichi now saw a small village. In reality, the privately-owned island was inhabited by 136 people, most of them native Hawaiians, who worked as agricultural laborers. One of these was Hawilo Kaleohano, who was now standing in an open field watching the smoking airplane come in for a crash landing, skidding to a halt about twenty feet away.

There were no electricity, telephones or communications radios on Niihau island, and the only regular contact with the outside world was a weekly boat trip from the plantation owner, who lived on nearby Kauai Island. So the people on Niihau were unaware that Hawaii had just been bombed and that the US was now at war with Japan. But Kaleohano knew that the plane was Japanese and that tensions had been high between the two nations, so when he ran to the crashed plane, the first thing he did was remove the dazed pilot’s identification papers and his pistol.

Nishikaichi was now surrounded by a small group of Hawaiians, who treated him with the customary Hawaiian hospitality, preparing a large meal with him as honored guest. Because none of them spoke any Japanese, they sent a message for Ishimatsu Shintani, an elderly Japanese-born beekeeper who was married to a native Hawaiian.

When Shintani arrived, both he and Nishikaichi spoke only a few words to each other before going silent, and Shintani, without telling the others what the pilot had said, declared that he wanted nothing further to do with the situation, and abruptly left. The Hawaiians then sent a message to another Japanese-speaker, Yoshio Harada and his wife Irene, both born in Hawaii of Japanese parents. When Harada arrived, Nishikaichi told him about the attack on Pearl Harbor, but Harada did not pass this on to the others. Nishikaishi also told Harada that he was under strict orders not to allow his identification papers to fall into enemy hands and asked for them back, but Kaleohano would not turn them over.

Later that night, on a battery-powered radio, the group heard about the bombing of Hawaii, and quickly dispatched an armed group to hold Nishikaichi in one of the huts, intending to turn him over to the plantation owner who was scheduled to make his weekly boat visit the next morning. But the Navy had restricted all boat traffic in the islands after the attack, and when the owner didn’t show up after several days, the islanders placed Nishikaichi under armed guard in Harada’s house. It was a mistake. Over the next several days, Nishikaichi apparently talked both of the Haradas and Shintani into helping him. On the afternoon of December 12, five days after the attack, Shintani approached Kaleohano with a large sum of money to try to buy the pilot’s papers, but once again Kaleohano refused. At around the same time, Harada and Nishikaichi overpowered the guard, locked him in a storage shed and, armed with a shotgun and pistol, headed off to Kaleohano’s house, bringing along a 16-year old boy they met along the way as a hostage. Kaleohano hid from them, ran to the village to warn the residents, then left with five others in a rowboat on the ten-hour trip to Kauai to notify the authorities.

Nishikaichi and Harada, meanwhile, went to the crashed Zero where they tried to contact someone on the plane’s radio, then torched the Zero to destroy it.

The next morning, the pair went to the village and captured several islanders, including Ben Kanahele and his wife Ella. When Kanahele made a grab for the pilot’s gun, a fight broke out. Nishikaichi shot Kanahele three times, but, using his hunting knife, Kanahele still managed to kill Nishikaichi, and Harada then killed himself with the shotgun. The next afternoon, military officials arrived on the island and found the dead pilot and Harada, and arrested Irene Harada and Shintani. They also confiscated the burned remnants of Nishikaichi’s Zero fighter, cutting off all the hydraulics and dismantling everything removable, and then dragging the remaining pieces into the trees to hide it from Japanese reconnaissance planes.

In its subsequent report on the incident, the Navy was most alarmed by the fact that there had been three people of Japanese descent on the island–two of them American-born–and all three had helped the downed pilot. “The fact that the two Niihau Japanese who had previously shown no anti-American tendencies went to the aid of the pilot when Japanese domination of the island seemed possible, indicate likelihood that Japanese residents previously believed loyal to the United States may aid Japan if further Japanese attacks appear successful.”

Citing the potential for sabotage by Japanese-Americans at military installations all along the Pacific coast, President Roosevelt ordered that they all be rounded up and confined in camps.

The burned-out remains of Nishikaichi’s A6M2 Zero rusted away on Niihau island for decades before finally being collected. They are now on display at the Pacific Aviation Museum at Pearl Harbor, Hawaii.