It is one of the longest-running debates in the history of mountain-climbing: who really was the first European to climb Mt Everest? The first people we know to have successfully climbed to the summit of Mt Everest were Sir Edmund Hillary and his local Sherpa guide Tenzing Norgay, in 1953. But there had been previous attempts, and one of them, some historians say, may have succeeded. The mystery could be solved by a camera–a camera that has been missing for almost 100 years. 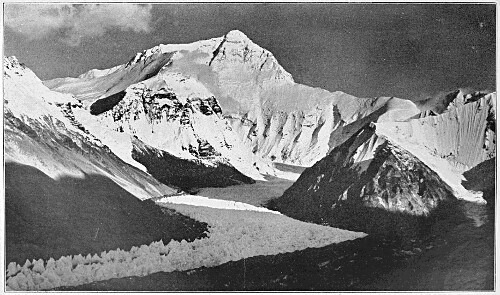 A photo from the 1921 Expedition: Mt Everest from the Rongbuk Glacier

At 29,029 feet in elevation, Mt Everest, on the border between Nepal and Tibet, is the highest point in the world. Ever since its discovery by the British in 1865, it has been the Holy Grail of mountain climbers.

British adventurer George Mallory had already climbed Mt Maudit and Mt Blanc in the Alps, and when the Royal Geographical Society and the Alpine Club formed the Mt Everest Committee to organize an expedition to reach the highest point in the world–the summit of Mt Everest–Mallory joined.

The first attempt, known as the “Reconnaissance Expedition”, was in 1921. It was led by British climber Charles Howard-Bury, and included a number of mountaineers, including Mallory, and several dozen local Sherpas acting as porters. It was not equipped for a full summit attempt and was only tasked with scouting a route up the mountain.

Because the country of Nepal was at the time closed to foreigners, the Expedition had to approach Mt Everest from the northern side in Tibet (which had just given permission for a climb after also having been closed to foreigners). The team climbed up the Rongbuk Glacier to a pass known as the North Col at 23,000 feet, took a number of photos of the north side of the mountain, and returned with a possible route, following the Northeast Ridge to a series of vertical walls and then the summit. It became known as the North Route.

The next year, the Everest Committee made its first serious effort to reach the summit, following the North Route scouted by the reconnaissance team. Led by General Charles Bruce and mountaineer Edward Strutt, the 1922 Expedition included Mallory, six other climbers, a doctor, support staff, and Sherpa porters. The team also included a cinematographer, and carried movie cameras and a number of foldable still cameras known as “vest Kodaks”. The movie cameras stayed in base camp, as they were too heavy to carry up the mountain. But some of the climbers carried the vest Kodaks to document their stay at the summit, if they were successful. The expedition also carried a first–bottled oxygen, used to fight the effects of altitude sickness in the thin air at 29,000 feet. Much of the British mountaineering community, however, considered the use of such equipment “unsporting” and criticized the use of oxygen.

The 1922 Expedition made three attempts to reach the top. The first, a team of four climbers and nine porters led by Mallory, did not use oxygen bottles. It reached 27,000 feet before giving up and turning back to base camp. A second team, led by George Finch, carried oxygen bottles with them. They were able to make extraordinarily good speed, but it too was forced to turn back at 27,300 feet. Mallory then led a third team, which was caught in an avalanche, killing seven porters.

Back in England, the press had eagerly reported on these attempts, and when Mallory and the others returned to London, they found themselves heroes. During one interview, a reporter asked Mallory why he wanted to climb Mt Everest, and Mallory’s simple answer is still famous: “Because it’s there.”

In 1924, the Everest Commission made another attempt. Once again led by General Bruce, the 1924 Expedition had eight climbers. One of the previous climbers, George Finch, had been dropped because he was Australian and the Commission wanted to make sure that a Britisher would be first to the top. Mallory threatened to quit over this, but in the end relented. A number of new climbers were taken along, including Andrew “Sandy” Irvine.

The first summit attempt consisted of Mallory and Bruce with 9 Sherpa porters. They reached 25,000 feet before conditions caused the porters to refuse to go on. As Mallory and Bruce returned to camp they met the second team on the way up, which reached 28,000 feet, only 1,000 feet from the top, before turning back. On June 8, 1924, Mallory, at Camp VI, decided to make one last attempt, with Irvine as his climbing companion. And unlike the previous two attempts, Mallory decided he could make better speed if he used bottled oxygen.

Early that afternoon, at Camp IV, team member Noel Odell went outside to see if he could spot the climbers above him, and he did. They were on the series of three vertical walls that were known as Step One, Step Two and Step Three, just below the summit. (Odell first reported that he had seen Mallory and Irvine on Step Two, but later decided he wasn’t sure which one it was.) This was actually not a good sign. It was already almost two in the afternoon. If Mallory and Irvine were still ascending the mountain, they did not have enough daylight left to reach the summit and climb back down to camp. And if they were descending back to camp, it was too early for them to have successfully made the summit and be returning now, indicating something had gone wrong. Odell climbed up to Camp VI, hoping to meet Mallory and Irvine when they got back to find out what had happened. They never showed.

And there began the mystery. Most mountain climbers assumed that Mallory and Irvine had been stopped by the steep walls at the Steps (the Second Step is particularly challenging to climb), were returning to Camp VI when Odell spotted them on the mountain, and had either fallen or had some other sort of accident on the way back. But a vocal minority held out for the possibility that the two had successfully reached the summit before disappearing and that they, not Sir Edmund Hillary and Tenzing Norgay in 1953, were actually the first climbers to reach the top of Mt Everest.

After Mallory’s disappearance, Tibet closed off its territory to explorers and no further expeditions were possible until permission was once again granted in 1933. And then part of the mystery was solved, when Irvine’s ice axe was found about 250 yards downhill from the First Step. Irvine could not have climbed any of the Steps without the axe, so he must have been coming downhill from the spot where Odell had seen them when he dropped it–and the position of the axe was consistent with a fall. Then Chinese climbers in 1960 and 1975 saw the frozen body of a European climber near the Steps, at a spot known as Yellow Band. It could only be Mallory or Irvine, and in 1999, when China once again gave permission for outside expeditions, a team of climbers from England went to the area specifically to look for the bodies. They found the frozen corpse of George Mallory, about 300 yards below the spot where the ice axe had been found, with a broken leg and several broken ribs from a climbing rope still around his waist. The injuries indicated that he had not fallen from the face of the First Step, but from a spot further down the mountain, and had likely survived the fall. But the body had a large hole in the forehead, apparently where the blade of an ice axe had entered. Most researchers have concluded that Mallory and Irvine had fallen, roped together, that Mallory had survived the fall (it remains unknown what happened to Irvine) and continued to descend the mountain until his ice axe struck a rock, kicked back into his face, and killed him.

Interestingly, the body did not carry a photo and a letter that Mallory had written to his wife and had promised to leave on the summit, and so (although later Hillary and Norgay would not find it or any other evidence that anyone else had been there before them) the possibility still remained that Mallory had reached the summit and died on the way back. And his snow goggles were in his pocket, leading some to argue that he had reached the summit and was now attempting to return to camp in the dark.

If Mallory and Irvine had indeed successfully reached the top, researchers realized, there was still one way to definitively prove it–Irvine had been carrying a “vest Kodak” with him, and would surely have taken photos at the summit to document their success. Even 100 years later, technicians would be able to develop the film if Irvine and the camera were ever found. And so the search is on, with teams of researchers organizing expeditions to search for Irvine’s body near the area where Mallory was found, hoping to solve the mystery.

In May 1953, New Zealander Edmund Hillary and his Sherpa guide Tenzing Norgay (who had guided an earlier Swiss team to within 800 feet of the summit) became the first to definitively reach the top of Mt Everest. They had used a route from Nepal called the South Col Route.

Since 1953 there have been a little over 3,000 people who have climbed Mt Everest, accompanied by professional Sherpa guides. Many of these are only marginally qualified for the climb, and are dismissed as “rich tourists” by the mountaineering community. Over 200 people have died on the mountain.