One of our most invasive species is the Brazilian pepper, also known as the Florida holly or sometimes as the Christmas Berry. Introduced as an ornamental, it has now taken over much of the state. 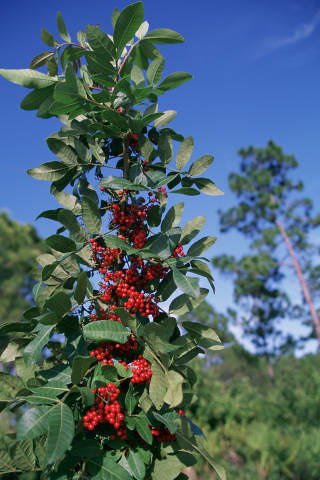 The Brazilian Pepper plant, Schinus terebinthifolius, is a large shrub, reaching 15-30 feet in height, with a short trunk, long compound leaves, and large clusters of tiny white flowers that turn into glossy bright red beans in the winter.

Taxonomically, Brazilian Pepper is not really a pepper. It is a member of the Anacardiaceae  family, which also includes the cashews, the sumacs, and the poison ivy and poison oaks. Like most of the other plants in its family, Brazilian Pepper produces a protective chemical oil called urushiol, which produces skin irritation and dermatitis on contact. But unlike its relatives Poison Ivy and Poison Oak, Brazilian Pepper’s urushiol is found mostly in the sap, and not on the leaves. In its native areas, it is known as the “tame tree” to distinguish it from its more virulent relatives. But if the tree is burned, in a wildfire or as part of a controlled fire, the smoke carries the volatile oils and can cause irritation in anyone nearby.

Because the plant evolved in a harsh environment, it has become tough and adaptable. It can withstand flooding, drought, and forest fires, can grow in either wet or dry soil, and is also able to tolerate high levels of salt and grow in brackish swamps and estuaries. The plant has two separate sexes, with each individual tree having either male or female flowers. Flowering happens in September and October, with clusters of immature green fruit appearing in November and maturing into bright red seed clusters in December. The seeds can remain buried for up to three months and still successfully sprout, and individual trees live about 35 years. The germination rate for the seeds is improved if they travel through the digestive tract of a bird or small mammal (raccoons and opossums eat the seeds). If the trunk is broken off or cut down, it resprouts by sending up new shoots from the roots. The tree grows very rapidly, sometimes as much as ten feet a year.

The Brazilian Pepper’s natural range is in Brazil, Paraguay and Argentina. Although it is not actually a pepper plant, the dried fruits are often used in South America as a spice and are sold as “peppercorns”.

But it was not because of its peppercorns that the tree has been spread around the world–it is because of its close association with a particular holiday. The dark green leaves and bright red berries resemble Holly, and in tropical areas where Hollies do not grow well, it was widely imported for use as Christmas decorations. It was already being grown in Florida as a garden ornamental by the 1840’s, where it became known as the “Florida Holly” or the “Christmas Berry”. Genetic testing has shown that there were two different sources for Florida’s Brazilian Pepper plants–one group came from southeastern Brazil and was imported into the Punta Gorda area around 1925, and the other comes from northern Brazil and was imported into Miami about 1890. Both varieties have now hybridized extensively within Florida. From there, the Brazilian Pepper was sent across the southern US, and quickly escaped cultivation and spread into the wild.

It took about 50 years from the time the plant was widely introduced into the wild until it began aggressively invading and taking over native habitats. It has been speculated that this was the result of adaptations that appeared after hybridization and increased the Brazilian Pepper’s gene pool, giving it more genetic diversity.

Once established in a wild area, Brazilian Pepper quickly overwhelms all the local native plants and forms dense monoculture stands, crowding out everything else. It is particularly good at invading areas that have been recently disturbed, such as roadsides, canal banks, urban areas, and places where there have been recent wildfires. In Florida, over 700,000 acres of habitat have been taken over by this species, where it invades pine flatlands, upland hardwood hammocks, and mangrove marshes.

The species is now considered to be one of the worst invasives in Florida. It is illegal to import or possess the plant, and the state expends considerable effort each year trying to eradicate the invader. These efforts are not very successful. The plant is tough and adaptable and can grow virtually anywhere, limited only by its low tolerance for cold temperatures. Since cut-off trunks will simply resprout, the entire root must be dug out. Only two herbicides have been found effective against Brazilian Pepper–glyphosate and triclopyr. Biologists have investigated over 200 of the tree’s natural insect enemies in Brazil to try to find a method of biological control, and two possible insects have been found–a species of sawfly and a thrip–but these have to be thoroughly tested to insure they do not present any danger to any of Florida’s native plants.