Our modern computerized technological society began, over 2.5 million years ago, with a chimp-sized creature that knocked a few chips off the end of a rock. 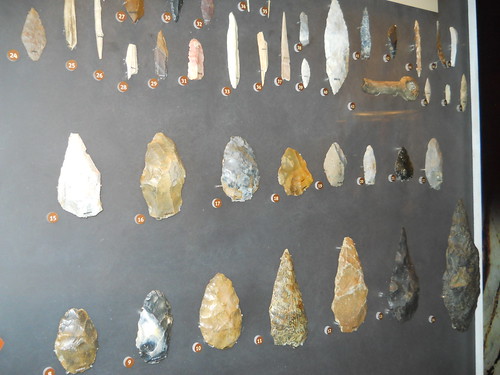 For many decades, it was believed that the single most important factor that set humans apart from all the other species is that we made and used tools. “Man The Tool-Maker” was the dominant paradigm in archaeology and anthropology for over a century.

Today, we know this is not true. Other animals have also been observed not only using tools, but making them. Sea otters use stones that they carry on their chest while floating to break open shellfish for eating. Some species of shore birds have been seen dropping clams and other hard-shelled food items from a height onto rocks or sidewalks to break them open. Crows have been observed using stones to break open eggs, and using twigs to pry insects out of logs–they even select and modify particular twigs to make them suitable for such use. Elephants have been seen breaking tree branches to a particular length and removing some of the twigs to use them as flyswatters. Dolphins carry sea sponges with them to sweep through the mud on the sea floor, looking for food. Chimps carefully modify twigs to use them to “fish” termites out of their mounds; they also make sharp sticks to spear birds and rodents from their hiding places, and use rocks to break open nuts.

It is likely that the very first tools used by hominins (the scientific term used for human ancestors) were similar to those used by modern-day chimps: simple stones to crack open nuts, modified twigs and sticks to dig up plants or to fish out termites. Indeed, it is likely that the common ancestor of chimps and humans, which diverged from each other about 7 million years ago, was a simple tool user and maker, armed with rocks and sticks. These tools, used by the earliest human ancestors (known as australopithecines), may have persisted for millions of years but would have left no trace in the fossil record. Because the wooden tools would not be preserved, and the earliest stone tools were not modified, we can only know today about the later tools that were intentionally manufactured by chipping or flaking stone.

The earliest manufactured stone tools that appear in the archaeological record are called “Olduwan”, after the Olduvai Gorge in Africa where they were first found: 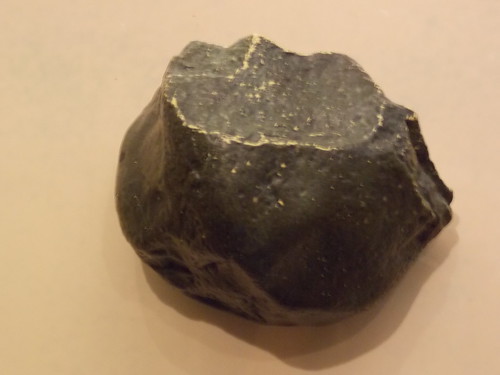 These are very simple tools–just a rounded fist-sized cobble of flint or chert from a riverbed, pounded with a harder hammerstone to knock a few chips off the end to form a sharp edge. The core can be used as a chopper or a crude axe for cutting wood, breaking open bones, or hacking apart scavenged animal corpses. The flaked chips have razor-sharp edges and can also be used as cutting implements.

The earliest Olduwan stone tool was found in Ethiopia and dates to around 2.6 million years. At this time, the modern human Homo sapiens species did not even exist. When Louis Leakey found the first Olduwan stone tools in Tanzania, he also found the fossilized bones of a human ancestor in the same deposits, which he assumed had made the tools and which he therefore namedHomo habilis (“skillful man”). Today, paleo-anthropologists know that, although Homo habilis did indeed make and use Olduwan tools for almost a million years, these stone tools did not begin (or end) with that species. Olduwan tools date back to 2.6 million years, but the earliest knownHomo habilis is only 2.3 million years old. The earliest Olduwan tools are instead found in the same deposits as one of the australopithecines, Australopithecus garhi, and it is probable that they were the earliest species to make manufactured stone tools.

At about 1.9 million years ago a new hominin species appears in the fossil record, called Homo erectus (some authorities split this into two species, regarding the early H erectus as the speciesHomo ergaster). This new species also used Olduwan technology inherited from its H habilisancestor for several hundred thousand years. But then, around 1.7 million years ago, hominin technology underwent a dramatic change. The new type of stone tool is known as “Acheulian”: 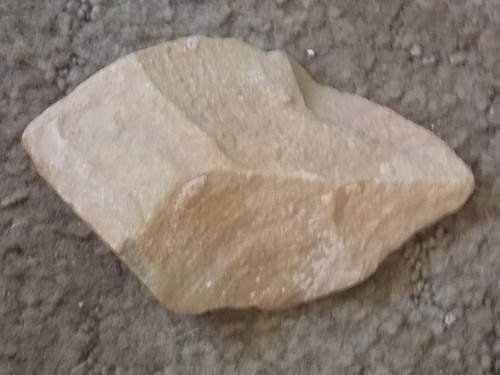 The new type of stone tool was a “biface”. Unlike the Olduwan, in which most of the original rock was left unmodified, the Acheulian style (named after the valley in France where it was first discovered) completely reworks the entire rock, using a hammerstone to knock off a large number of flakes on both faces to form a sharp edge all around, and to reduce the original rock into a standard tool shape, a flattened teardrop. This tool is known as the “hand axe”–the dulled butt end was held in the hand, and the sharp pointed end was used for chopping and cutting. Armed with their Acheulian hand axes, Homo erectus became the first hominin species to leave Africa and populate Asia and Europe. For 1.5 million years, until Homo erectus disappeared around 150,000 years ago (some authorities place the latest H erectus into a different species called Homo heidelbergensis), the bifacial stone hand axe was the dominant form of human technology.

Then, around 250,000 years ago, two new species appeared with radically new technologies. One of these was the Neandertals, Homo neandertalensis, who populated Europe and the Middle East. The Neandertals were the first hominin to make large-scale  use of flake technology, in which the tools were not made from a core by striking flakes off it, but by modifying the flakes instead. Neandertals would carefully prepare a stone core by knocking off small flakes to shape it into a fluted cylinder, then strike off long flakes which were carefully trimmed into the desired shape. The Neadertal culture came to be known as “Mousterian”, named after the site in France where it was first discovered. Unlike the Acheulian technology, which had only one all-purpose type of stone tool, the Mousterian flake technology produced a wide variety of tools, each specialized for a particular use. Some flakes were trimmed to form notched hunting spear points (the Neandertals did not have the bow and arrow or the dart thrower, and made only thrusting-type spears), others were shaped to form hide scrapers, engraving burins, narrow drills and borers, and other tools.

When our own species, Homo sapiens, appeared about 200,000 years ago, we also developed a flake technology, which was somewhat similar to the Neandertal Mousterian. But the early humans used the spear-thrower (often referred to by the Aztec name “atlatl”) and, later, the bow and arrow, allowing them to hunt much more effectively and safely. Homo sapiens also had a wide variety of tools made from bone, shell, and wood, and while these materials may have been used from very early times in hominin evolution (they do not preserve well in the fossil record), the variety and sophistication of early humans far exceeded anything known from the Neandertals or other hominims.

When modern humans reached North America around 15,000 years ago, they took their chipped-flake technology with them, and it was here that some of the most complex stone tools appeared. The Clovis people hunted Ice Age mammals with throwing spears tipped with distinctive fluted stone points: 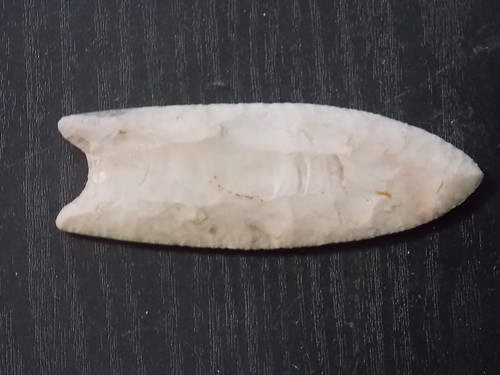 These were carefully chipped from stone flakes, and then, in a final touch, a single long flake was removed on both sides down the middle–a refinement that we are still not entirely sure how it was done. The Clovis point gave strength at the place it was needed most–at the cutting edge–and the fluted midsection made it easier to bind the point securely into a spear or arrow foreshaft.

In later centuries, the Native Americans produced a wide variety of arrow points and tools made from chipped stone flakes: 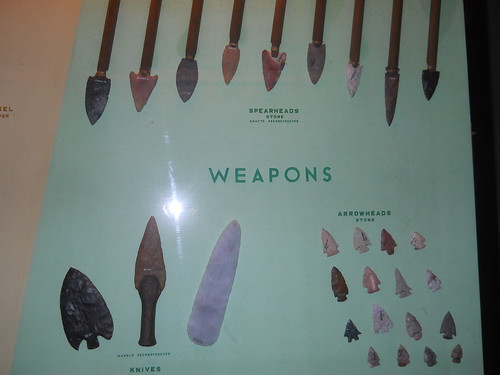 Both in North America and the rest of the world, by the Neolithic Period or Late Stone Age, stone tools were being made by “pecking and grinding”. 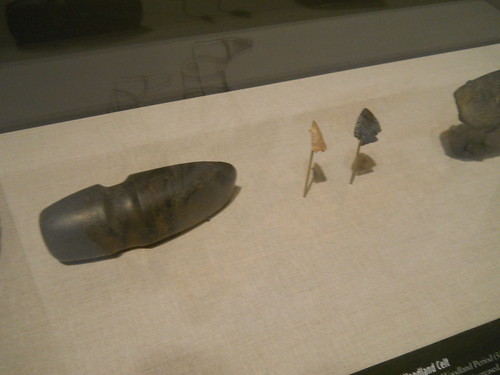 In this process, the tools were not chipped or flaked, but were abraded by pecking at it with a harder hammerstone to grind away the surface a bit at a time. Using this slow process, axes, bowls and other tools were ground into shape. The pecking method gave tools a much smoother surface that made it easier to securely bind tools to hafts and handles.

Pecked tools were the highest level of sophistication reached by any Stone Age tools. They were not replaced until the Bronze Age began in the Middle East about 5,000 years ago. (In some areas, however, where copper metal could be found at the surface, it was used to produce ornaments and some tools even during the Stone Age.) The Bronze Age was followed in Africa, about 3000 years ago, by the Iron Age. But even after the iron Age had begun, there were still some people who were also making and using quick utilitarian stone tools, such as scrapers, as late as the 6th century.

3 thoughts on “The Evolution of Stone Tools”