Alexander Berkman is perhaps best-known for being the lover of famed anarchist and radical feminist Emma Goldman. But Berkman was an important figure in his own right–he was a leading theoretician and writer on the principles of anarchism, whose books include The ABC of Communist Anarchism and The Bolshevik Myth. He also served jail time for attempting to kill the Carnegie Steel executive Henry Frick. 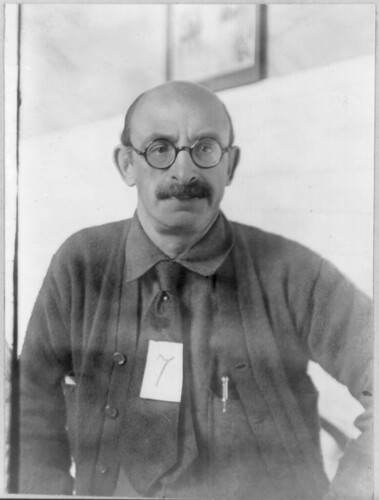 Alexander Berkman, at the time of his deportation to Russia

Ovsei Osipovich Berkman was born in 1870 in the city of Vilnius, the capital of Lithuania.  His father was a well-off Jewish shoemaker. Like all Jews at that time in the Russian Empire, the Berkman family was restricted to living in a ghetto called “The Pale”, but in 1877, Osip Berkman’s social position was high enough that the Tsar’s authorities granted his family permission to move to St Petersburg. While there, his son Ovsei changed his name to the more Russian-sounding “Alexander”.

Alexander Berkman was sent to an elite “gymnasium” for a classical education, where he proved to be a brilliant student. But as an idealistic young teenager, Berkman was soon caught up in politics. By 1880, a wave of radicalism had swept across Russia, as resentment grew against the Tsarist regime and the crushing economic poverty in the countryside. On March 1, 1881, a student revolutionary group called the Narodnaya Volya (“The People’s Will”) blew up Tsar Alexander II as his car passed Berkman’s school—the explosion shattered the windows of his classroom. Five student members of the Narodnaya Volya were arrested and executed. Young Berkman was inspired by their idealism and dedication, and was drawn into the radical student movement. He was particularly influenced by his uncle Mark Natanson. Natanson had already been arrested three times by the Tsarist secret police and had been exiled to Siberia, but escaped, returned to St Petersburg, and helped form the student revolutionary group Zemya y Volya (“Land and Freedom”). Natanson would be arrested and sent to Siberia twice more before leaving for Europe.

In 1882, Osip Berkman died, the family shoe business was sold, and the Berkman family was ordered by Tsarist authorities to move to the Jewish ghetto in Kovno. Soon afterwards, Alexander began distributing smuggled radical pamphlets to his fellow students at the new school. In 1885, at age 15, Berkman was expelled from school after submitting an essay entitled “There is No God”. In 1887, Berkman’s mother died, and in 1888, at the age of 18, he decided to emigrate to the United States. He was already a committed anarchist.

In New York City, Berkman joined several anarchist groups, and worked as a typesetter for the anarchist newspaper Freiheit (“Freedom”), run by German radical Johann Most, who advocated the use of dynamite in “revolutionary attacks” on police, robber barons, and government officials. In 1889, Berkman met Emma Goldman, a fellow anarchist immigrant from Russia. They moved in together and became inseparable partners for the rest of their lives.

By 1892, Berkman and Goldman had moved to Worcester, Massachusetts, where they made a living by selling lunches to local workers. That year, the Homestead Strike broke out in Pennsylvania against the Carnegie Steel Company. The Steel Company’s manager, Henry Frick, hired strikebreakers from the Pinkerton Detective Agency, and gunfights broke out between strikers and strikebreakers. Nine strikers and seven Pinkertons were killed. Berkman, inspired by Most and his idea of “propaganda of the deed”, decided to make a dramatic gesture which he hoped would provoke the working class into revolutionary action. Berkman traveled to Pittsburgh, where, on July 23, he burst into Frick’s office and shot him twice. Frick survived, and Berkman was sentenced to 22 years in prison.

Berkman’s attack on Frick resulted in a massive police crackdown on anarchists, all over the country. It also provoked a political split, between anarchists who supported violent actions and those who did not. One of Berkman’s fellow prisoners, who had been a Homestead striker, told Berkman that he was an outsider and his action had accomplished nothing. Even Johann Most, who had advocated “propaganda of the deed” for years, now wrote that it was a “total failure”, and did nothing more than bring police repression and popular resentment against the anarchist movement. By the time Berkman got out of jail in 1905, after having served 14 years of his sentence, his views had matured. He was, he said, no longer interested in symbolic violence to “inspire” the workers–now he realized that only organization and solidarity could bring about a revolution.

After writing an account of his years in jail (published in 1912 as Prison Memoirs of an Anarchist), Berkman became an editor for Emma Goldman’s anarchist newspaper Mother Earth. Then, in April 1914, striking workers at a Rockefeller-owned coal mine in Ludlow, Colorado, were attacked by a group of Pinkertons, state militia, and hired strikebreakers, who fired on the striker’s camp with machine guns and then set it afire. Thirteen strikers were killed. Outraged by the Ludlow Massacre, Berkman joined with a number of local anarchists to organize a mass demonstration outside Rockefeller’s house in New York City. At some point, a plan was hatched to bomb the Rockefeller house, which went awry when the bomb exploded prematurely and killed the people who were making it. Berkman’s apparent involvement in the plot led to a split with Goldman. Berkman left Mother Earth, moved to San Francisco, and founded a new anarchist journal of his own, called The Blast.

But when the US entered the First World War in 1917, Berkman and Goldman reconciled and began traveling together making speeches against the war, against the military draft, and against the draconian new Espionage Act, which made it illegal to criticize the US government or to speak out against the war. In 1917, both Berkman and Goldman were arrested. Over the next two years, waves of mass arrests, known as the “Palmer Raids”, rounded up over 100,000 Americans—members of the anarchist movement, the IWW, labor unions, the newly-formed Communist Party, and the Socialist Party (including elected Socialists who were serving in Congress and in state legislatures)—and charged them with “sedition”. Many of those arrested were jailed, many more were deported. Berkman was sentenced to two years in jail, and upon his release in 1920, was ordered deported. He and Emma Goldman, also ordered deported, were both placed on board the old transport ship Buford and sent to Russia.

Russia, of course, had just undergone the 1917 Revolution, and political radicals of all stripes were flocking to the new “Soviet Union”. Berkman and Goldman both arrived together in the USSR full of enthusiasm and anxious to see the new social order being constructed. Within a year, however, both were disillusioned. Instead of a socialist system of political and economic democracy, they found a police state where the government ruled by terror and where Party bureaucrats grew fat by siphoning wealth from the urban and rural workers. Both Berkman and Goldman left the USSR in 1921 and wrote books detailing their experiences in Russia (Berkman’sThe Bolshevik Myth was published in 1925).

Berkman settled first in Berlin and then in Paris. After writing an introduction to anarchist ideology (published in 1929 as The ABC of Communist Anarchism), Berkman faced declining health from prostate cancer. On June 28, 1936, unable to bear the pain of his medical condition any longer, he killed himself with a handgun.