The Air Potato is an odd invader from Africa. It produces no flowers or seeds, but reproduces by potato-like tubers that grow on the vines–and all the new plants are clones of the parent. 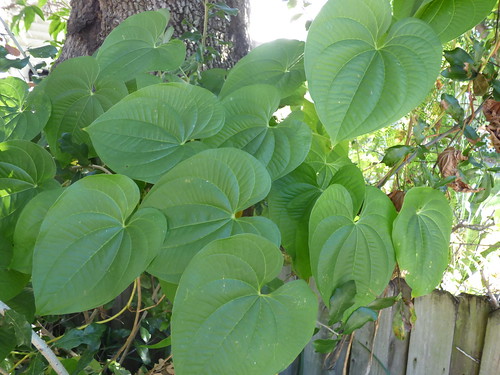 The Yam family, Dioscoreaceae, has 870 different species that grow in tropical areas all around the world. Since ancient times, many species have been cultivated by humans for their large edible underground tubers, which are known by a variety of different names: manioc, yams, sweet potatoes. In many species, the rootstock contains toxins which must be leached or cooked out for the plant to be safe for humans. In the Amazon Basin and on the Pacific Islands, yams are a staple food source. Yams became particularly useful for long ocean voyages, since the underground tubers could be stored for long periods of time.

Because the yam vines have large attractive shiny leaves, some species, though inedible, have also been widely grown by gardeners as an ornamental garden plant. And one of these isDioscorea bulbifera, known as the Air Yam or the Air Potato.

The Air Potato is a stout vine with large attractive heart-shaped leaves, which have an unusual fanlike vein pattern. The name comes from the odd aerial tubers that develop at the leaf junctures: these look somewhat like a small potato, ranging from marble-sized to tennis-ball size. These are known technically as bulbils. The vine climbs from the ground over trees and shrubs, often covering them completely and shading out the host, eventually killing it. The vine can grow as much as 70 feet to the very top of a tree. The underground tubers can be as much as ten inches long and weigh over ten pounds.

In the US, the vine usually dies completely back to the ground each winter, growing again from the underground tubers to full length in the spring. It is enormously fast-growing, easily reaching eight inches a day. As the vine dies in winter, the aerial bulbils drop to the ground; since they are light and spongy, they are easily carried by flowing water and deposited elsewhere. Each “air potato” is capable of growing a new vine. In the environmental conditions found in the US, the plants are not usually able to make their small inconspicuous white flowers or set seed, so virtually all of the propagation is done through these aerial tubers, and each new vine is a genetic clone of the one it came from.

It is not known exactly how the plant was first introduced to the United States. The most likely scenario is that it came in the late 18th century along with the African slave trade. There is some question about the edibility of Dioscorea bulbifera: some sources regard it as inedible, others claim that the underground tubers can be eaten after a complicated process of leaching and roasting has removed the toxins. The plant may have originally been imported as a potential food source for African slaves. The first recorded description of the Air Potato in the US was in 1777, in a garden in Mobile, Alabama.

The first definitively-known introduction in Florida came in 1905, when a few specimens were obtained by horticulturalist Henry Nehrling, who was active in the plant nursery trade near Orlando and probably sold them as ornamentals. Nehring also sent a few plants to the US Department of Agriculture and asked them to evaluate the Air Potato’s usefulness as a commercial food crop. The USDA concluded that it wasn’t edible, but also noted that the plant’s rapid growth and ease of propagation made it a potentially dangerous invasive. But they did not ask Nehring to destroy his plants or stop selling them.

By 1993, the Air Potato had escaped numerous Florida gardens and invaded the wild, where, without any natural enemies and with perfect environmental conditions, it quickly overgrew the native trees and shrubs, shaded them out, and killed them. The invasive yams were found in 23 Florida counties, as well as parts of Alabama, Georgia, and Mississippi. By 2006 the vine infested an estimated 25% of Florida. In 1993 it was listed as a prohibited plant.

Efforts to control the Air Potato have been hampered by its biology. The buried rootstocks are nearly invulnerable to herbicides, and the huge number of aerial tubers produced by each vine are impossible to remove once they get into the soil–even the smallest of them are able to produce a brand new vine. Even Air Potatoes that have been two-thirds eaten by squirrels or rodents can still successfully sprout.

In cooperation with the Nature Conservancy, the state began organizing local “Air Potato Roundups”, in which groups of citizens would volunteer to dig up and destroy the vines and their rootstocks in local areas. These roundups removed as much as 13 tons of Air Potato plants at a time. But they were nowhere near enough to halt the plant.

In desperation, Florida officials turned to biological warfare. Once the Florida Air Potatoes were identified genetically as Chinese varieties of an African strain, the search began for some sort of biological control from its native area that would attack the vines without touching any of Florida’s native vegetation. After years of research and testing, a suitable candidate was found: the Air Potato Leaf Beetle (Lilioceris cheni). These are small Chinese beetles that look like red or brown Ladybugs without the black spots. Both the adult beetles and the larvae feed exclusively on the leaves of the Air Potato vine. After several years of testing in special quarantine zones to confirm that the beetles did not attack any native Florida species (including our own native yam species), the first large-scale releases of the beetles were done in the Miami-Dade area in 2011. Since then, over 145,000 beetles have been released in 32 counties, including the Tampa Bay area. 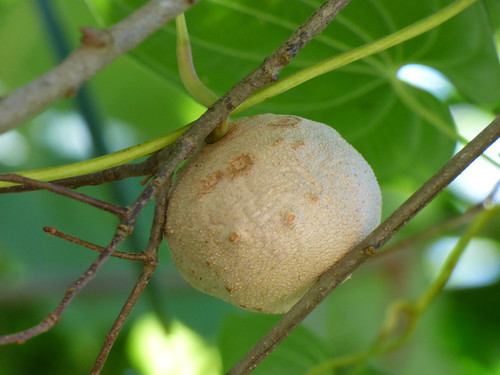 One thought on “Florida’s Invaders: The Air Potato”