Remember, remember the 5th of November:
Gunpowder, treason, and plot.
We see no reason why the gunpowder treason
Should ever be forgot.

Today, on Guy Fawkes Day, people in Britain are celebrating with fireworks and bonfires. But most Americans have no idea at all who Guy Fawkes was, or how the Gunpowder Plot happened…. 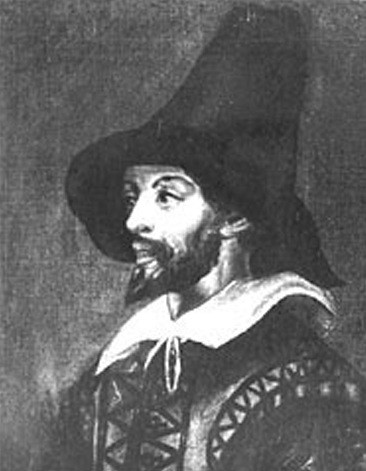 In 17th century Britain, political and religious struggles were often the same. There was no freedom of religion in England: the Anglican Church was the official state religion, and other faiths, especially Catholicism, the religion of the enemies Spain and France, were viewed not only as heresy but as political foes. Queen Elizabeth I, who had fought bitter war with Catholic Spain and had beaten back the Spanish Armada when the Spanish King, with the blessing of the Pope, tried to invade England, had ruthlessly persecuted Britain’s Catholic minority, outlawing Catholic Mass, forcing every British citizen to attend Protestant church services under penalty of a fine, and executing any practicing Catholic priests.

When Queen Elizabeth died without an heir in 1603, the reigning King of Scotland, as the son of Mary Queen of Scots, Elizabeth’s executed Catholic sister, was next in line for the British crown, and took the throne as King James I. King James was a Protestant (his authorized “King James Version” of the Bible is still the most widely-used among Protestant churches) but he had promised upon taking the throne that he would relax the anti-Catholic laws imposed by his predecessor. Instead, King James almost immediately issued an order requiring all Catholic priests to leave the country. It looked as though the repression of Britain’s Catholics would continue.

In response, in early 1604, a Catholic political dissident named Robert Catesby, a minor member of the nobility, met with fellow Catholics Thomas Wintour (his cousin) and John Wright to hatch a plan to kill the King, rally a rebellion under Prince Charles (who was thought to be more sympathetic to Catholicism) and invite Spain’s Catholic Armies in to take over the country and turn it Catholic. To decapitate the British Government, Catesby decided that the best option was to use explosives to blow up the Parliament Building on its first day in session, thus removing the King, his heir (the Prince of Wales), the Ministers, and the leaders of Parliament all in one stroke. Over the next few months, Catesby convinced almost a dozen family and friends to join in the plot.

There was just one problem–Catesby didn’t know anything about explosives or how to use them. So in May 1604, Catesby somehow made the acquaintance of Guy Fawkes, a mercenary who had served in the Spanish Army and was living in Holland. In the Army, Fawkes had gained a great deal of experience with gunpowder. And now the plan took shape: the plotters would dig a tunnel under the Parliament Building, pack it full of black powder, and, while the court was in session, set off the explosion that would blow up the entire British Government. Some of the plotters would lead a rebellion in the north, and Fawkes, after setting off the explosives, would travel to Europe to rally support from France and Spain.

Later that year, the group rented a cottage house near the Parliament Building and started digging, but their progress was painfully slow. Then in May 1605 opportunity smiled on them–one of the plotters, Thomas Percy, was able to rent an unused cellar located directly under the House of Lords chamber. Fawkes, in the guise of Percy’s servant, packed the cellar with 36 barrels of gunpowder, hiding them in a pile of coal and kindling wood. The explosion was planned for November 5, the opening day of the session of Parliament.

But just ten days before the planned attack, a former Catholic member of Parliament, Lord Monteagle, (the brother-in-law of one of the plotters) received an anonymous written note, which read:

“My lord, out of the love I bear to some of your friends, I have a care for your preservation. Therefore I would advise you, as you tender your life, to devise some excuse to shift of your attendance of this Parliament, for God and man hath concurred to punish the wickedness of this time. And think not slightly of this advertisement but retire yourself into your country, where you may expect the event in safety, for though there be no appearance of any stir, yet I say they shall receive a terrible blow, the Parliament, and yet they shall not see who hurts them. This counsel is not to be contemned, because it may do you good and can do you no harm, for the danger is past as soon as you have burnt the latter: and I hope God will give you the grace to make good use of it, to whose holy protection I commend you.”

Monteagle took the note to the King’s Secretary of State, who took it to the Privy Council. On November 4, Royal troops searched all of the underground portions of the Parliament Building, where, in the rented cellar, they found Guy Fawkes (who had gone to make a last-minute check on things) and the gunpowder. Fawkes was arrested and, after two days of torture, confessed to everything. (There are some indications that the English security services already knew of the plot and Catesby and Percy’s connection to it.) The other conspirators quickly fled London, but were captured by Royal troops (four were killed resisting capture–including Catesby) over the next few days.One of the conspirators died in prison. The remaining plotters, including Fawkes, were tried and, in January 1606, executed in the manner that was traditional for traitors: by drawing and quartering. They were hanged until nearly unconscious, then their genitals were cut off and burned in front of them. Next their stomach was sliced open with a knife and their intestines pulled out and burned, before they were finally decapitated with an ax. Their dead body would then have its arms and legs tied to four horses who pulled it into pieces, with each piece sent to be displayed in a different part of the kingdom, as a warning to traitors everywhere. In the executions, Fawkes went last–and was spared the torture when his neck broke unexpectedly during the hanging. His dead body was then beheaded and drawn and quartered, and his head was placed on display in London.

Even the dead conspirators who had died during capture were dug up and beheaded.

The entire Catholic population was now viewed as treasonous conspirators, and new anti-Catholic laws were promptly passed.  It would be another 200 years before Catholicism would be openly tolerated in Britain, with Catholics only being allowed to vote after 1829.

On November 5, Parliament opened its session without incident. King James, as a show of thanksgiving, ordered that bonfires be lit throughout the kingdom to celebrate the foiling of the plot. And since then, the British have celebrated the Fifth of November, Guy Fawkes Day, by lighting bonfires, setting off fireworks, and burning effigies of Guy Fawkes and the Gunpowder Plotters.