It is a Sunday morning in Pearl Harbor, Hawaii. The rows of battleships anchored off Ford Island are quiet, much of the crew barely awake. Suddenly a wave of carrier-launched airplanes screams over the horizon. Unchallenged, they swarm over the entire base, including Battleship Row and the nearby airfields. The surprise is total.

But this is not December 7, 1941, and these attacking carrier planes are not Japanese.  They are American. 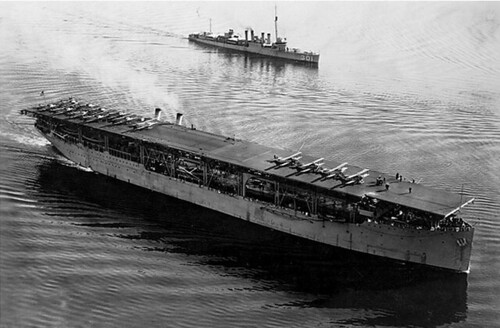 When the Wright Brothers started the air age in December 1903, military authorities around the world were quickly interested, but were unsure what practical uses the new contraptions were best suited for. The first military airplane, the 1909 Wright Military Flyer, was used by the US Army as an aerial observer for reconnaissance and as an artillery spotter. Various navies around the world recognized that the airplane might be useful in fleet engagements too, both to scout for enemy ships and to correct the aim of naval gunfire on targets over the horizon. In March 1910, the French Navy modified a number of Fabre monoplanes by replacing their landing wheels with pontoon floats, and produced a plane that could take off and land on the sea–they called it the Hydravion (“sea plane”). In December 1911, the French Navy commissioned a ship, theFoudre, that was specially-built as a seaplane carrier. She stored four Fabre seaplanes (later replaced by more-capable Voisin seaplanes) in a hangar on deck, which were lowered into the water by a crane, flew off for their missions, then landed in the water alongside the carrier to be winched back aboard. By 1913, the British Royal Navy and the US Navy had seaplane carriers of their own, the HMS Hermes and the USS Mississippi. In the Pacific, the Japanese, who were quickly becoming a naval military power, were also experimenting with seaplane carriers.

When World War One broke out in August 1914, the seaplane carrier finally got its chance for action. In September, the Japanese navy, fighting for the Entente allies, launched the first naval air strike in history: four Japanese copies of French Farman seaplanes were lowered from the seaplane carrier IJN Wakamiya, flew off to bomb a German base in Tsingtao, China, and returned to their ship to be recovered. Three months later, on Christmas morning, the British launched a more ambitious attack: a fleet of three seaplane carriers, HMS Engadine, Riviera andEmpress, launched a group of nine Short seaplanes loaded with bombs to attack the German Zeppelin base at Nordholz, and damaged several of the airship sheds.

But the seaplane carriers presented some crippling problems. The ships were slow and unable to keep up with the fleet. The seaplanes could not take off in rough seas and were useful only in good weather conditions. And winching the planes off and on the ship was a time-consuming task. It was quickly realized that naval airplanes would be much more useful if they could take off and land directly onto a fast-moving ship.

The first experiments took place in the US. In November 1910, a Curtiss biplane took off from a flat wooden platform that had been built over the forward turrets of the cruiser USS Birmingham, and landed on shore. Two months later, the same pilot took off from land, flew to the battleship USS Pennsylvania anchored offshore, and landed on a flat wooden deck built over the aft section of the ship. To stop within the short landing distance, the plane used a metal hook hanging from its tail to snag a series of ropes stretched across the deck and weighted down with sandbags. The concept of the aircraft carrier had been born.

The British Royal Navy took a passenger ship that was in the process of construction, added a flat wooden flight deck that ran the length of the ship, and launched her in December 1917 as the HMS Argus. She carried up to 18 Sopwith Pups and Sopwith Ship Strutters. The first American aircraft carrier, a converted coal-carrier, was commissioned as the USS Langley in 1922. She carried 36 biplanes, and was used mostly to test various operations procedures. In 1927, the first American fleet carriers were commissioned, the Lexington and the Saratoga. They carried a mix of 78 fighters, dive bombers and torpedo bombers.

But the new carriers did not find a favorable place in the US Navy. Like all of the other world navies, the US assumed that the battleship was the queen of the sea, and any future naval fight would take the form of two long lines of big-gun battleships slugging it out with each other. The aircraft carrier may be good for coastal defense or patrolling, the Admirals thought, but the battleship was the decisive weapon of the seas.

One Admiral disagreed. Rear Admiral Harry Yarnell, who had formerly commanded a battleship as well as the carrier Saratoga, understood air power better than the other Admirals, and became convinced that the carrier air group was the true element of sea power and the battleships were vulnerable to attack from the air. In 1932, he got his chance to test his idea. Each year, the US Pacific Fleet, headquartered in San Diego, did a wargame in which a large force of cruisers and destroyers sailed out from San Diego, unannounced and without warning, to “attack” the US Naval Base at Pearl Harbor, Hawaii. The battleships at Hawaii would detect the approaching fleet and sail out to meet it–and always won.

But in the 1932 exercise, Admiral Yarnell decided to take an entirely unexpected approach. He left all of his cruisers in San Diego, ordering them to keep radio silence throughout the wargame so his opponents in Hawaii did not know where they were. Also under radio silence, he launched a small fleet consisting of just the Lexington and Saratoga, accompanied by three destroyers as an escort. To hide his fleet from radar as he approached Hawaii, he stayed inside a local rain squall. On February 7, 1932, he launched his wave of biplanes from the two carriers at dawn: he had intentionally picked a Sunday morning when everyone was on shore leave. The planes took Pearl Harbor completely by surprise, dropping flares and flour-sack “bombs” that “destroyed” all of the battleships at anchor and most of the defending airplanes on the ground. The biplanes returned to land on their carriers, and the little fleet sailed back to San Diego without ever even being found by the scouts from Hawaii. It was a stunning result. But the other admirals cried “foul”, arguing that in a real attack they would have picked up the enemy carriers as they approached and destroyed them with battleships. The lessons went unlearned.

So they were repeated again.

In 1938, it was Admiral Ernest King who was in command of the wargame fleet. And rather than send out the massive cruiser squadron, King followed the same basic plan that Yarnell had: he sent out just the carrier Saratoga, escorted by destroyers, to approach Hawaii unnoticed, launch her planes at Pearl Harbor, and achieved complete surprise. Once again, the battleships were “destroyed” in port. Once again, the other Admirals argued that the attack would not have worked in a real war, and once again the lessons went unlearned.

But one navy was paying attention. In Japan, Admiral Isoroku Yamamoto was also convinced that air power would be the decisive factor in any future naval war, and oversaw the construction of a large force of carriers for the Imperial Japanese Navy. Yamamoto had heard all about the results of the two American wargames from his sources in Hawaii, and unlike the US Navy, he absorbed their lessons. When he attacked Pearl Harbor on December 7, 1941, his plan was a virtual copy of the one successfully used way back in 1932 by Admiral Yarnell.