When most people think of “genetic engineering”, they think of “Genetically Modified Organisms” and “Frankenfoods” and protests over Monsanto and “safety issues” with GMO foods. But the reality has always been that much of the genetic engineering research in the US has been carried out by the military, and the Pentagon was in on recombinant DNA technology almost from the ground floor, beginning way back in the 1970’s. 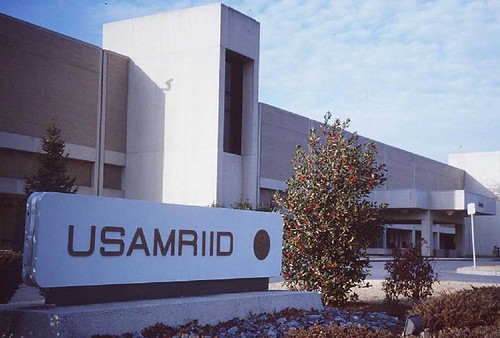 USAMRIID, at Ft Detrick, Maryland            Photo by US Defense Department

The history of the American biological warfare research program goes all the way back to World War II. In 1941, the War Department had asked the National Academy of Sciences to appoint a committee to determine if biological warfare was feasible. The United States’ first biological research center, Camp Detrick (later re-named Fort Detrick) opened in Maryland in 1943. Throughout the war, the United States was carrying out joint germ warfare research with the British, and developed workable weapons using anthrax (code-named “N”) and botulin toxin (code-named “X”).

The most in-depth research into biological warfare during the war, however, had been carried out by Imperial Japan. The Japanese BW program was started in 1935 under Lieutenant General Shiro Ishii. Most of the experiments were carried out on Chinese and American prisoners of war. Thousands of POWs were infected with tetanus, typhus, cholera, gangrene and plague. The Japanese  also reached the stage of testing their research in actual combat. There were hundreds of reports of Japanese dropping bacterial bombs in China.

When the war ended, the US captured General Ishii and learned all the details of the Japanese research from him. By 1947, a deal had been worked out between General Ishii and General MacArthur. In return for access to the Japanese experimental BW data and cooperation from Ishii, the United States would not prosecute any of the researchers for war crimes. Japanese experimental data dominated the American program throughout the 1950’s.

By 1969, however, the various problems associated with the use of live biological pathogens had convinced most US officials that the use of biological weapons was too unpredictable and troublesome. As a result, President Nixon ordered the program to end. Negotiations began towards a global ban on biological weapons, and in 1972 the Biological Weapons Convention was signed.

Then, in the late 1970’s, the program was back as the Defense Department showed a sudden new interest in the bio-toxins. By 1978, the Pentagon listed research programs centering around “botulin neurotoxins, anthrax toxins, several staphylococcal enterotoxins, enterotoxins produced by the cholera and shigella species, diphtheria exotoxin and pseudomonas exotoxin A and exoenzyme S.”  The cause of this flurry of activity was the development of a new technology–genetic engineering, or “gene splicing”.

The Pentagon was, in fact, in on DNA research beginning in the early 1960’s, when DNA itself was just beginning to be understood. Several studies during the late 60’s and early 70’s were investigating the possibility of using genetic technology to develop new strains of biological agents. The DOD’s genetic research projects dropped off after the 1969 moratorium and the 1972 treaty.

As genetic engineering techniques began to grow more sophisticated in the late 70’s, however, the Defense Department re-opened its genetic research. Several research programs involving genetic engineering were carried out at the Detrick lab throughout the 1980’s. Most of these efforts were geared towards developing vaccines for potential BW agents. Another sizable program experimented with the human gene that controls the production of the enzyme cholinesterase, in hopes of developing a treatment for nerve gas poisoning. The Defense Department repeatedly denied that it was using gene-splicing techniques to develop new BW agents or to modify existing ones.

Genetic researchers, however, were not blind to the potential wartime uses of such technology.

In the early stages of biological warfare research, investigators had to be content with selectively breeding any desirable characteristics which appeared through natural or induced mutations. If researchers wanted a pathogen that had a higher or lower level of virulence than normal, for instance, they had no choice but to wait until such a strain appeared naturally and then to selectively breed that strain. This process was time-consuming and not always successful. Using DNA techniques, however, desired characteristics can potentially be produced, quickly and cheaply, by adding it into the pathogen’s genetic code. It opened up an entirely new world of possibilities. Recognizing this, the Pentagon began a crash program to apply DNA technology to their biological defense research, and this reached its peak during the Reagan years.

One possibility which has been the target of military DNA research takes advantage of the body’s natural immune system to defeat vaccinations. When disease-producing organisms enter the body, the immune system responds by attacking the pathogen’s protective protein coat until it produces the correct antibody that breaks down the cell wall of the pathogen and destroys it. All vaccines, whether they are based on dead pathogens or on weakened strains of live ones, provide immunity because they allow the body’s immune system to match the proper antibody to the particular invader. Thus, when the “real” pathogens enter the body, the immune system is able to attack immediately because it already has the proper antibody. The pathogens are destroyed before they can do much damage.

A potential biological aggressor, however, would have little trouble in using genetic engineering technology to slightly alter the protein coat of the pathogen, making the organisms unrecognizable to the body’s immune system. Such a tactic would, in effect, nullify the immunity brought about by any previous vaccinations, since the new altered organism is not the same as the one used in the vaccination. An army using altered pathogens could, if properly vaccinated against the new variant, unleash disease on the opponent’s population even if they had already been vaccinated against the ordinary strains of that disease.

Research also pointed to the possibility of manufacturing genetically-engineered pathogens that were programmed to attack only specific groups of people. Genetic engineering seemed to present the possibility of altering organisms to become virulent only in the presence of a specific genetic marker. This “ethnic killer” could presumably then be pre-programmed to attack some targeted ethnic group while remaining harmless to everyone else. While a perfectly discriminatory “ethnic killer” may indeed be impossible, the concept was the object of considerable research.

Using genetic techniques, it was also possible for researchers to induce a normally harmless microbe to manufacture a lethal protein toxin. Some American officials in the 1980’s, for instance, concluded that Soviet researchers were investigating the possibility of using genetic technology to induce harmless bacteria to manufacture biological toxins or venom (such as cobra venom) once they were inside the body. Using these processes (which were already being used commercially to produce human insulin, human interferon and other medicinal substances), a potential biological aggressor could quickly and clandestinely manufacture large amounts of potent bio-toxins, or convert harmless bacteria into biological weapons.

Another concept which came under scrutiny was the so-called “bio-chemical weapon”. The idea here is to use genetically-manufactured natural body chemicals, such as hormones, enzymes, and endorphins, to alter an enemy’s body functions and thus to incapacitate or kill him. As a 1985 Pentagon report pointed out, “It is possible to artificially produce the natural biological substances which exert potent regulatory effects on the body. These substances are normally present in the body and control mental states, mood and emotion, perception, organ function, growth and repair, temperature, and other body processes. These substances are not to be considered toxic and are indispensable to the normal functioning of the human body. But even slight imbalances can cause profound physiological effects, leading to incapacitation and even death.”

All of these potential weapons had already been outlawed by the 1972 Biological Weapons Convention, but there was a loophole. While the treaty outlaws the development of biological weapons, it allows signatories to carry out “defensive research”, with the goal of developing detectors, anti-contamination measures, vaccines, etc. against potential new BW agents. In  practice, however, there is little difference between an offensive BW program and a defensive one. In order to develop  an effective defense against a potential weapon, the defender must know how that weapon works. He must be familiar with its strong points as well as its weaknesses, and also its possible variations. Thus, in order to perfect a defense against an enemy’s potential biological weapon, the defender must first develop the ability to construct and use such a weapon himself. The result is a large grey area between legal “defensive” work and prohibited “offensive” research.

It is quite clear that, despite the 1972  treaty outlawing the production of biological weapons, military research into genetically engineered bio-weapons continued for at least a further 15-20 years, in the form of “defensive research”.

Today, the Defense Department genetic research facilities at Ft Detrick are part of USAMRIID, the “US Army Medical Research Institute of Infectious Diseases”, which works closely with the civilian NIH and CDC to produce vaccines and carry out treatment research on diseases like Ebola, Chikungunya, Q Fever, and Hemorrhagic Fevers. But during the “Global War on Terror” in the 2000’s, research attention was once again focused on military needs, as USAMRIID began, under the auspices of the Department of Homeland Security, researching pathogens and techniques that could be used by terrorists as potential biological weapons.

Unlike the sciences of physics and chemistry, the science of biology has yet to unleash its dark side on humanity. We can only hope that remains true.