It had an Art Deco look and a teardrop shape. It was cheap and reliable. It was technologically advanced for its time. It inspired the design of the Volkswagen Beetle (so much that Volkswagen got sued for it). And it was built–not in Detroit–but in Communist Czechoslovakia. It’s the Tatra Company’s “Tatraplan”. 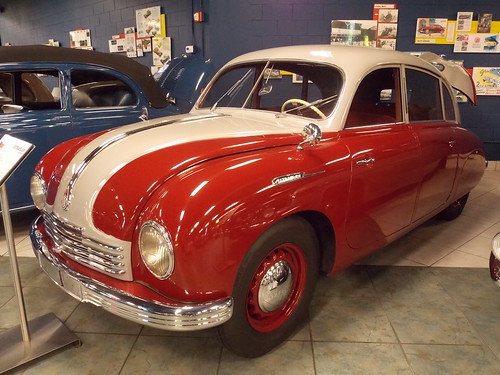 In 1850, Czech engineer Ignác Šustala formed his own company in the province of Moravia and began producing horse-drawn buggies. By 1891, the company, now called Nesselsdorfer Wagenbau-Fabriksgesellschaft, began manufacturing railroad cars, then in 1897, started production of a gasoline-powered “horseless carriage” called the Präsident. Powered by a two-cylinder Benz engine and a two-speed transmission, it could reach 19mph. The Präsident was a commercial success, and ten new automobile models followed within the next few years. In 1919, the automobile division was renamed Tatra, after the nearby mountain range in Slovakia. It specialized in making luxury cars that were technologically advanced, with streamlined bodies (designed using wind tunnels) and rear-mounted air-cooled engines (the first ever used in a car). Tatra was the first company to introduce independent suspensions, four-wheel brakes, and a revolutionary body frame based on a central steel tube.

When Adolf Hitler came to power in Germany in 1933, he made several state visits to Czechoslovakia and was impressed by the Tatra designs. When Hitler asked automaker Ferdinand Porsche to design and produce a small inexpensive reliable “people’s car”, or “Volkswagen”, Porsche took his ideas from the Tatra line, particularly the Tatra Model V570 and Model T97. In fact, Porsche’s Volkswagen was so much like the Tatra models that Tatra sued for infringement–a court action that came to an abrupt end when Hitler annexed the Czech Sudetenland in 1938 and then invaded the rest of Czechoslovakia in 1939. Under the Nazi occupation, Tatra began producing trucks and tank engines for the Germans, and German Army officers began using the Tatra Model 57a as staff cars.

When the war ended, the Tatra Company (after continuing its infringement suit against Volkswagen, who settled out of court) was nationalized by the new Czechoslovakian Republic. (Some of the company’s officials were arrested for collaboration with the Nazis, but were later released). After the 1946 elections, the country was run by a coalition of six different socialist and communist parties. They immediately drew up a Two Year Economic Plan to facilitate postwar recovery, which would be followed by all of the state-owned industries, including Tatra. While resuming production of its pre-war automobile models, Tatra also introduced a new design, which, in honor of the new economic program, they named the Model 600 Tatraplan (it was also a play on the Czech word for an airplane–“aeroplan“). Based on the Tatra T97 design, the new car would be all-metal, have more interior room, and would have an even more aerodynamic body with a lower drag coefficient, leading to more power and efficiency (gasoline in postwar Europe was very expensive). Two prototypes were made in 1946 and 1947, but the engines in both proved unsuitable, and a brand-new engine was then designed from scratch. Production of the Tatraplan finally began in 1948–the same year that the Czechoslovakian Communist Party seized total power from its coalition partners, in a bloodless coup.

The Tatraplan was a four-door unibody design with Tatra’s characteristic swept aerodynamic body shape and a single fin in the rear midline (there was no rear window), that could seat six people. The engine was an air-cooled rear-mounted 1952cc 52-horsepower Boxer designed “flat four”, with two cylinders poking straight out from each side of the engine block. It could reach 80mph.

From 1948 to 1951, 4,242 Tatraplans were built before the central planners decided to move production to the Skoda Works so Tatra could concentrate on producing trucks, buses and railroad engines. Another 2,100 Tatraplans were built at Skoda before production ended in 1952. None of the Tatraplans went to private owners–they were used by mid-level factory managers, minor government officials, and low-level Communist Party functionaries. A special T201 Model with a squared back compartment was used as ambulances. A small number of Tatraplans were sold overseas in Canada, Sweden, Finland, West Germany, Switzerland, Austria, and Belgium.

After the Tatraplan ceased production, Czechoslovakia began importing Volga and Lada cars from Russia, but the Soviet-made cars did not match the quality of Czech models, and there were often shortages and delays, so in 1956, planners in the Czechoslovakian Government ordered Tatra to begin production of a new car model, the Tatra 603, based on the Tatraplan design. 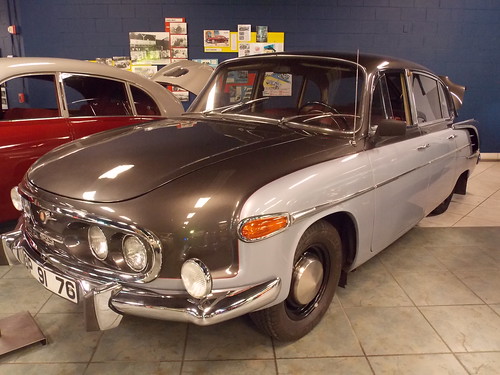 The Tatra 603 had a bigger V8 engine with 105 horsepower, and was designed as a luxury limousine. From 1956 to 1978, 20,422 Tatra 603’s were built. They were used exclusively by high-ranking East European government officials, embassy staffs, and the Communist Party elite. They were also exported to officials in friendly countries, including China, Cuba, and Egypt. Fidel Castro was driven around in a white Tatra 603 that was fitted with power brakes and air conditioning. The Soviet Union, however, stayed with its Volga limousines.

The Tatra 603 was replaced in 1975 by the Tatra Model T613, which was designed by an Italian company in a joint venture. The T613 was produced for the use of high-ranking officials until the Communist Bloc collapsed in 1989–then it continued in production for private buyers until 1996. In 1999, Tatra stopped making passenger cars, and now only makes trucks. It is the third-oldest still-existing car manufacturer in the world, behind only Daimler-Benz and Peugeot.

One thought on “The Comrade’s Car: The Tatraplan”