Few people in aviation history were as colorful as the Frenchman Charles Nungesser. He began his flying career in the French military, became one of France’s highest-scoring aces in World War One with 43 confirmed air victories, but was arrested and grounded for insubordination several times. After the war, Nungesser flew in some Hollywood movies, then in 1927 he and a navigator took off in a plane he named “The White Bird”, attempting to cross the Atlantic nonstop two weeks before Charles Lindbergh. He was never seen again.

When World War One broke out in August 1914, Charles Nungesser joined the French Army as a cavalryman, won a decoration for bravery, and transferred to the flying corps. Although he chafed at military discipline and was grounded several times for ignoring orders he didn’t like, Nungesser was a superb fighter pilot, and, despite a crash landing that broke both his legs and left him partially crippled, Nungesser finished the war with 43 air victories, making him France’s third-ranking air ace.

After the war ended, the attention of the world was focused on civilian aviation. In May 1919, the US Navy seaplane NC-4 became the first plane to fly across the Atlantic, from Long Island to Lisbon with refueling stops at Newfoundland and the Azore Islands. Two weeks later, British pilots John Alcock and Arthur Whitten Brown, in a World War One Vickers Vimy bomber, flew nonstop from Newfoundland to Ireland.

That same month, a New York hotel owner named Raymond Orteig offered a $25,000 reward (about $350,000 today) for the first airplane that flew nonstop across the Atlantic between New York and Paris. For the next five years, nobody made an attempt to claim the Orteig Prize, and in 1924 Orteig renewed his offer. By then, technological advances had placed it within reach, and a number of aviation luminaries attempted to claim the prize. In September 1926, the highest-scoring surviving ace from the First World War, Frenchman Rene Fonck, attempted a flight from Paris to New York, but crashed on takeoff. In April 1927, American pilot Richard Byrd, famous for his flight over the North Pole, also crashed on takeoff during his attempt to fly from New York to Paris. By May 1927, four other pilots had been killed while attempting the flight.

On May 8, 1927, Nungesser made his attempt. Accompanied by navigator Francois Coli, Nungesser took off from Le Bourget airfield outside of Paris in a modified Levasseur PL.8 biplane that they had christened l’Oiseau Blanc (“White Bird”). Their planned route would take them across the English Channel, over southern England and Ireland, then across the North Atlantic to Newfoundland, south to Boston and then to a landing in New York. 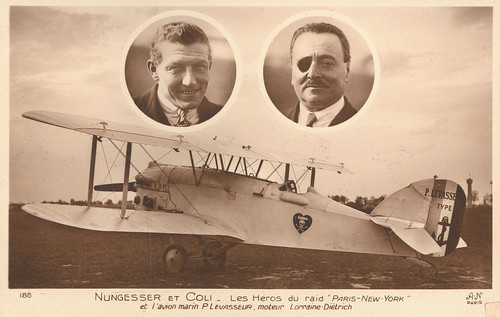 On takeoff, Nungesser was escorted by a flight of French Air Force fighters as far as the coastal town of Etretate. Shortly afterwards, the plane was sighted over the English Channel by the Captain of a British navy submarine, then was seen as it approached the Irish coast at Dungarvon. After crossing southern Ireland, Nungesser’s plane was spotted by a Catholic priest in the coastal town of Carrigaholt, as it headed out over the North Atlantic.

In New York, word had already been received that Nungesser was on his way, and a crowd began gathering at the airport to witness his arrival at an airstrip near the Statue of Liberty. Telegrams received in Paris indicated that Nungesser had crossed Long Island and was about to land, and crowds gathered in Paris waving French flags. But in New York, the White Bird had not yet actually arrived. The plane had carried enough fuel for 42 hours of flight–and when Nungesser had still not landed in New York, it became apparent that he would not be arriving at all. It was presumed that the White Bird had crashed somewhere between the coast of Ireland and Canada. A frantic air-sea search by the French, Canadian and American navies turned up nothing. Nungesser, his navigator, and his airplane, had simply disappeared somewhere in the vast North Atlantic. That left Byrd and Lindbergh as the only remaining teams who were ready to fly. Byrd decided to wait until a period of bad weather had cleared up, but Lindbergh decided to take the chance, and on May 20, 1927, he took off from New York in his plane “The Spirit of St Louis”, arriving in Paris 33 hours later to claim the Orteig Prize and become the most famous aviator in the world. Ironically, Lindbergh is famous today mostly for the wrong reason–he was not the first person to fly nonstop across the Atlantic (Alcock and Brown had already done that). But he was the first to fly nonstop from New York to Paris (and he did it alone, which was not even a requirement for the Orteig Prize–Lindbergh did it just to save weight).

It was assumed that Nungesser’s plane had run into strong headwinds and bad weather from a North Atlantic squall, had run out of fuel, and had crashed into the ocean. But there were tantalizing clues that the White Bird had perhaps reached the Canadian coast. A number of people told local Canadian newspapers in 1927 that they had heard an airplane flying overhead at the time Nungesser disappeared, and several people reported seeing a white airplane circling over an island near Newfoundland. A telegram uncovered years later indicated that in August 1927, several pieces of white airplane wing had been reportedly found off the small island of St-Pierre, near Newfoundland, by a US Coast Guard cutter. During the 1930’s and 1940’s, several claims were made by hunters and trappers in Canada and Maine that they had found aircraft wreckage in the remote woods, and one report even claimed that a wrecked aircraft engine had been found and salvaged as scrap metal. And in 1961, pieces of airplane wreckage, including parts of an instrument panel, were supposedly brought up by a lobster boat off the coast of Maine. None of these reports was ever confirmed and the claimed “wreckage” has never been produced. Various researchers since the 1980’s, including Nungesser’s descendants, have searched for wreckage in places ranging from Newfoundland all the way down to Maine, and some wooden airframe struts and engine pieces were reportedly found in Maine in 2011. But no definitive wreckage from the White Bird has ever been identified.

Some conspiracy theories have claimed that the White Bird had been shot down by the US Coast Guard who had mistaken it for a rum-runner smuggling Prohibition whiskey to the US from Canada, or, conversely, that it had been shot down by bootleggers to avoid detection of their hidden whiskey stills. Others have claimed that the wreckage of the White Bird has in fact been found, but has been covered up to protect Lindbergh’s reputation as an American hero.

The fate of Nungesser and the White Bird remains as unknown today as it was in 1927.

2 thoughts on “White Bird: The Disappearance of Charles Nungesser”