The Lockheed Vega was one of the premiere aircraft of the 1930’s. Designed in 1927 as a long-distance passenger plane capable of carrying six passengers and a crew of two, the reliable and rugged Vega soon became a favorite with air explorers, many of who increased its range by removing the passenger seats and adding extra fuel tanks. Amelia Earhart used the Lockheed Vega in many of her flights. And Wiley Post, flying a Vega named “Winnie Mae”, set two around-the-world speed records. 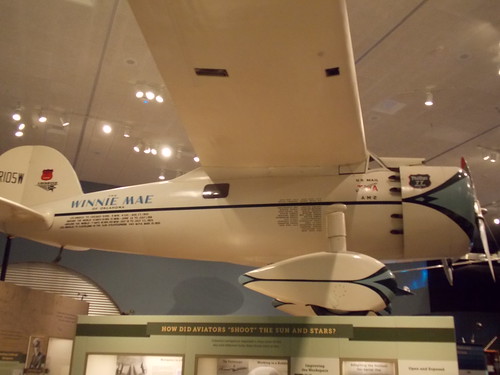 The “Winnie Mae”, in the Smithsonian Air and Space Museum

In 1929, the speed record for a round-the-world air flight was set–but not by an airplane. Captain Hugo Eckener had flown the German dirigible airship Graf Zeppelin around the world in 21 days. In 1931, aircraft pilot Wiley Post decided to beat this, and win the speed record for a fixed-wing airplane. Post had entered aviation as a barnstormer in the 1920’s, then became the private pilot for Oklahoma oil millionaire FC Hall–all this despite losing an eye in an oilfield accident. In 1930, Hall and Post began to plan the speed record attempt. Hall purchased a Lockheed Vega 5C which he named after his daughter, the “Winnie Mae”. Post installed a modified Wasp engine to increase the speed and range. After flying the Winnie Mae in the 1930 Men’s Air Derby from Los Angeles to Chicago (and winning the race), Post was ready to circumnavigate the globe. He picked Harold Gatty as his navigator and, on June 23, 1931, the Winnie Mae took off from Roosevelt Field in New York.

The first stop was at Harbor Grace, Newfoundland. From there, Post and Gatty crossed the Atlantic to the RAF airfield in Flintshire, England, and then to Hanover, Germany. After taking off from Hanover for Berlin, they decided to return for more fuel, and thus ended up taking off from Hanover twice. From Templehof Airdrome in Berlin, they went on to Moscow’s October Airport, then flew all the way to Siberia, making stops in Novosibirsk, Irkutsk, Blagovyeschensk, and Khabarovsk. At Blagovyeschensk they were delayed several hours when the Winnie Mae got stuck in the muddy landing strip and had to be pulled out with a tractor, then were delayed again in Khabarovsk while mechanics checked the plane for damage.

From Siberia, Post and Gatty made the 17-hour flight to Nome, Alaska, landing at Solomon Beach. When they tried to take off from Nome on June 30, loaded with extra fuel, the Winnie Mae sunk into the soft sand and struck the propeller on the ground, bending the tips. Post and Gatty hammered the prop back into shape with a rock. Then, while starting up the engine to check the propeller, Gatty was accidentally whacked by a propeller blade, fortunately without serious injury.  They then took off, landing at Fairbanks, where they obtained another propeller from Alaska Airways and repaired the Winnie Mae.

With her new propeller, the Winnie Mae took off again, and flew from Fairbanks over the Rocky Mountains to Edmonton, Canada. When they got there, they found that the airstrip, Blatchford Field, had become a muddy swamp after a storm, and they would not be able to take off from it. So with the help of a few dozen locals, they pulled the Winnie Mae to the center of town, and took off from one of the city streets with just inches to spare on either side. From Canada, Post and Gatty went to Cleveland, and finally returned back to Roosevelt Field at Long Island on July 1. They had gone around the world in 8 days, 15 hours, and 51 minutes.

After the flight, Post and Gatty were feted as celebrities–they were guests at the White House, and were honored with a ticker-tape parade in New York. For Post, the best honor came from FC Hall, who gave the Winnie Mae to him as a gift. The two pilots wrote an account of their around-the-world trip titled Around the World in Eight Days. The Foreword to the book was written by humorist Will Rogers, who was a friend of Post’s and who often flew as a passenger with him.

Almost immediately, Post began making plans for a second around-the-world flight–this time solo. The Winnie Mae’s engine was overhauled, and she was fitted with a new automatic pilot system that had just been developed by the Sperry Gyroscope Company. Also added was a new radio-homing system developed by the US Army. On July 15, 1933, Post took off in the Winnie Mae from Brooklyn, following much the same route as his 1931 flight. The automatic pilot system did not work as expected, and Post ended up sleeping only 24 hours total during the flight. His sole major mishap occurred when he got lost in Alaska and had to land in the tiny mining town of Flat, nosing over in the mud and wrecking his propeller during the landing. A new propeller had to be flown in for him. Post landed back at New York on July 27, with a new circumglobal speed record of 7 days, 18 hours, and 49 minutes.

After his record-breaking solo flight around the world, Post laid plans to fly in the 1934 MacRobertson Race from England to Australia. Concluding that he could fly faster if he flew high enough to ride the jet stream air current, Post modified the Winnie Mae for extreme high-altitude flight (up to 30,000 feet). Because the Lockheed Vega’s cockpit could not be pressurized, Post had to work with the BF Goodrich Company to design and test a special pressure suit. After deciding not to enter the now-aging Winnie Mae in the MacRobertson Race, Post continued to work on his pressure suit, which he flight-tested in March 1935, riding the gulf stream from California to Ohio in seven hours. The Wiley pressure suit would later become the basis for the Air Force’s high-altitude flight suits, which in turn were modified and used by the Mercury astronauts.

In August 1935, Post and his friend Will Rogers decided to fly a fishing trip to Alaska, using a prototype airplane that Post was working on using parts from two different airplanes, the “Orion-Explorer”. Post asked the engineers at Lockheed to replace the plane’s landing gear with water-landing pontoons for the Alaska trip, but they refused, concluding that it would alter the aerodynamics and make the plane too nose-heavy. Post, on his own, added pontoons anyway. With Rogers, he flew to Alaska and made several stops. On August 15, 1935, as they took off from a lake near Point Barrow, Alaska, the plane nosed over into the water and crashed. Both Post and Rogers were killed instantly.

In 1936, Wiley Post’s widow sold the Winnie Mae to the Smithsonian. The plane is now exhibited in the Air and Space Museum.

One thought on “Icons of Aviation: Winnie Mae”