One of the more recent of Florida’s Invaders is amongst the largest lizards in the world, and the largest in the Western Hemisphere. It was one of the most popular reptile pets in the US of all time. And now it has invaded Florida. It’s the Green Iguana. 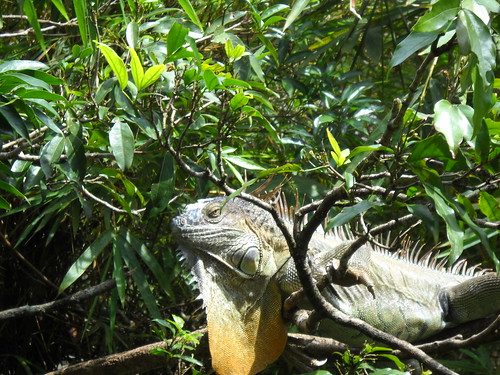 The Iguanas are a widespread group of lizards, ranging from North and South America all the way to the Pacific islands and Madagascar. The “true Iguanas” are in a subfamily known as Iganinae, which includes the Chuckwalla and Desert Iguanas of the Southwest US, the Spinytail Iguanas of Mexico and Central America, the Rock Iguanas or Rhinoceros Iguanas of the Caribbean, the Land Iguana and Marine Iguana of the Galapagos Islands, and the Fijian Iguana in the Pacific. It also includes the Green Iguana, which is the most common and widespread species, ranging from Mexico and the Caribbean through Central America to southern Brazil. The scientific name, conveniently enough, is Iguana iguana.  The name “iguana” comes from the word that the Caribbean Island natives used to refer to these lizards—iwana. Green iguanas reach an adult length of six feet, and are one of the largest lizards in the world. They can live up to 15 years.

The widespread Green Iguanas can vary noticeably in color according to their geographic location. In general, Iguanas from the northern parts of their range, like Mexico, tend to be orangish in hue, while those from the southernmost parts of their habitat, Peru or Brazil, tend towards a bluish-gray color. Central American Iguanas are usually bright green. The colors on an individual Iguana can also change according to its mood. When cold or very frightened, Iguanas tend to darken their colors. Conversely, they tend to look paler if they are too warm or if they are vigorously making a threat display. During breeding season, male Iguanas reinforce their territorial displays with a wash of bright orange or rust color on their head and neck. During a territorial display, the dark crossbands on the Iguana’s tail and body often become more vivid. Normally, these bars provide camouflage in the dappled shadows of the forest canopy. Male Iguanas spend a lot of time defending their territory from each other, warning each other away with a display of head-bobbing and dewlap-extending. In general, young Iguanas throughout their range tend to be a much brighter and more vivid green than their adult relatives. As they get older, their color patterns tend to fade.

In the wild, the preferred habitat of the Green Iguana is lush tropical forest along river-courses. They are almost completely arboreal and only occasionally descend to the ground, though they often drop into water from overhanging branches if disturbed–they are excellent swimmers, though their long climbing toes make them awkward walkers on land.

Iguanas are unusual among reptiles in being almost completely vegetarian, eating plant material (occasional reports have them eating bird eggs, however). Even among herbivorous animals, Green Iguanas have their particular niche virtually to themselves. Although many other animals live in the rainforest canopy, only Iguanas and a few specialized monkeys are able to subsist on a steady diet of mature tree leaves. Other arboreal herbivores cannot deal with the tough fibrous leaves, and instead focus on the fruits or the tender new leaves and shoots, which are much easier to digest. The Iguana uses commensual bacteria in its gut to break down the tough cellulose into usable sugars. Because their diet consists largely of tree leaves, Iguanas can only survive in areas where there are large amounts of foliage year-round–and that means tropical areas.

In the wild, Iguanas are semi-social animals. Although they live in groups and are only seldom found alone, these aggregations are not very closely-knit, and are not true social groups like a pride of lions or a troop of baboons would be. Most individual Iguanas, particularly the females, may enter or leave a particular group at whim, and individual animals in a group may or may not be related to each other. A consistent trend, though, is that Iguanas of the same age and size tend to hang around together. It is rare to see younger, smaller Iguanas sharing a space with larger adults—partly because younger Iguanas are suited to a different ecological “micro-habitat” than are adults (preferring low shrubs and bushes rather than trees), and partly because the larger adults would make it a habit to push around and intimidate the youngsters if they were together.

A great proportion of the scattered islands in the Caribbean have been colonized by Iguanas. Although biologists had long suspected that the Iguanas reached these isolated islands by floating there, they were unable to directly observe an instance of that happening until 1995, when hurricanes Luis and Marilyn followed each other through the Caribbean within two weeks of each other. During the storms, a huge mat of logs and mud was dislodged from the island of Guadeloupe and floated away on the sea. Perched atop it were at least 15 Green Iguanas of various sizes and ages. Three weeks later, the raft washed ashore at the previously iguana-free island of Anguilla, over 175 miles away, and the Iguanas, who had survived their journey without any access to food or water, found a new home. Today their descendants are still breeding on Anguilla.

It is likely that Green Iguanas were floating to Florida for thousands of years in this same manner, though they apparently never became established here–until they got some help from humans . . .

In the early 1980’s, the reptile pet trade in the United States exploded, and the Green Iguana was at the top of the list. The species was already being commercially farmed in Central America as a food animal (people there call it “tree chicken”), so it wasn’t long before huge numbers of hatchling baby Iguanas began arriving in the US for the pet trade, as many as 800,000 a year. The baby iggies were small, adorably cute, and dirt cheap–as little as ten bucks. Children everywhere in the US eagerly snapped them up.

Unfortunately, virtually none of the people who bought these baby Iguanas knew what they were getting into. Green Iguanas do not make good pets for most people. Not only do they get enormously large (an adult male can measure six feet from nose to tail and weigh 15 pounds) and require huge cages and specialized equipment (such as ultraviolet lamps and basking lights), but if they are not properly tamed and socialized as babies, they grow up to be hostile, defensive, hissing and biting demons. Trust me, being near a huge lizard that doesn’t like people (and has over 100 razor-sharp teeth in its mouth as well as a tail whip that can break skin) is no fun. Of the several million Green Iguanas that were imported into the US, nearly all of them were dead within a year, the victim of improper care and unsuitable diet or conditions. Most of the survivors were ultimately released into the wild by keepers who no longer wanted them, either because they were afraid of the lizard, or couldn’t provide the space needed by a six-foot pet.

Wild Green Iguanas began appearing in small numbers around Miami in 1964. It is not known if these were escaped/released pets, refugees from exotic animal shipments at the port of Miami, or stragglers that had rafted in from the Caribbean islands. But by 1990, the pet trade in these lizards was thriving, and they began appearing all over Florida. (Two other species, the Black Spinytail Iguana and the Mexican Spinytail Iguana, also became popular in the pet trade and made their way to Florida). In most of the state, these invaders could not survive the winter (though in some areas like Tampa Bay, new escapees replenished the wild population each spring and summer). But in Miami, Ft Lauderdale and the Keys, the big lizards became firmly established and began breeding, digging deep nesting holes in the sand and laying as many as 60 eggs at a time. Estimates of the number of Green Iguanas in Florida ranged from 100,000 to 300,000. Green Iguanas have also become established in Hawaii (where they were smuggled in illegally–Hawaii has strict laws against any reptile import) and in Texas.

As invaders go, the Green Iguanas are actually pretty benign. They are vegetarian and do not prey on any of Florida’s native animals or compete with them for food. They are not aggressive towards humans or other animals (though they will defend themselves vigorously with bites and tail-lashes if they are caught or cornered). Some Floridians have simply accepted the Iguanas as a new exotic addition to life in the Sunshine State. But many other residents resent the big green lizards, partly because they are afraid of them, and partly because Iguanas are eating machines and can very effectively destroy the nicest of landscaped gardens and lawns, by eating the vegetation (they are especially fond of Hibiscus and Mango trees) and by excavating their large nest pits in the ground. Some cities, like Key West, take a mostly live-and-let-live view of the lizards, while other areas have a kill-on-sight policy. The state of Florida still does not ban the sale of Iguanas, though it does forbid releasing them into the wild or moving them from one location to another. (The Petsmart chain has voluntarily stopped selling baby iguanas in its stores, nationwide, citing environmental and animal-welfare concerns.)

In the winter of 2010 the Iguana invaders were dealt a severe blow, when Florida experienced an unusually cold winter–for nearly two weeks, temperatures were as much as 20 degrees below normal. The lizards cannot tolerate conditions like that, and numbed Green Iguanas, paralyzed by the cold, tumbled out of trees and onto lawns and sidewalks. Most of them died. But a number of them hung on, coming out of their torpor and reviving once temperatures returned to normal. While many areas of Florida were virtually iguana-free for a few years afterwards, the populations are already starting to recover, and wild-born baby iguanas can now be seen in many areas. It is likely that the Green Iguana is here to stay.