Of all the leading figures of the American Revolution, there was no one quite like Thomas Paine. 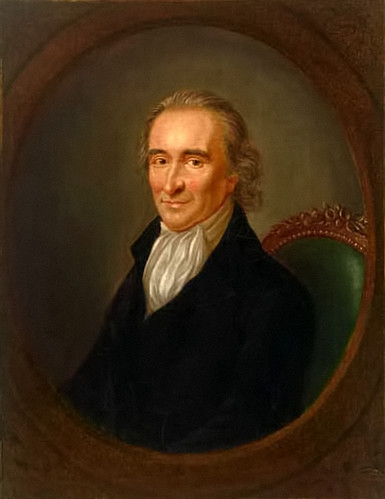 Born in England in 1737, Thomas Paine first became involved in political matters as a young man in a minor government office. His first published work, a pamphlet entitled The Case of the Officers of Excise, argued for better pay and working conditions for Royal Government tax officers–an ironic topic, given the events that would follow in Paine’s life.

In 1774, while living in London, Paine was introduced to the American inventor Benjamin Franklin and, inspired by Franklin’s description of his life in the colonies, sailed to Philadelphia in November. He became the editor of Pennsylvania magazine.

By 1775, colonial resentment at the arbitrary authority of the English government seethed, and after the Battles of Lexington and Concord, open rebellion was imminent. The growing revolutionary movement, however, still had no unifying goal. Some colonials wanted direct representatives in Parliament; others wanted autonomy and home rule under the British Crown. It was during this time, in January 1776. that Thomas Paine published (anonymously) a short booklet titled simply Common Sense, which proposed the goal that only a few had seriously considered before–independence from Britain and the establishment of a brand new nation.

The effect was like an atom bomb, and Common Sense started, virtually single-handedly, the movement for American independence. Within six months, over 100,000 copies of the booklet had been printed, the colonies had declared their independence, and the American Revolution began in earnest.

If Paine’s views on independence proved to be wildly popular, however, most of his other views were not. Paine was a man far ahead of his time, and many of his “radical” ideas shocked even his fellow revolutionaries. At a time when slavery was unquestioned and African-Americans were considered nothing more than property, Paine argued for the abolition of slavery. When women were viewed as little better than property, Paine made the case for full female citizenship and equality, including the right of women’s suffrage. When most Americans viewed the huge disparity between rich and poor as part of “the natural order of things”, Paine argued for the redistribution of wealth, for full social and political equality, and for safeguards to protect the poor from the rich (a view which particularly horrified the wealthy elite who made up the Continental Congress–and who would go on to write a Constitution which prohibited direct election of the Senate and the President, and laws which reserved the right to vote solely for white male property-owners, less than five percent of the American population). And while most Americans viewed churches and religion as central parts of their lives, Paine attacked the hypocrisy of the church and openly argued for freethinking.

Paine’s radical views on wealth, slavery, the role of women, and religion, made him a pariah among the leaders of the revolution. His political writings remained popular with the people, however, and soon after the Revolutionary War broke out, Paine published a widely-read series of pamphlets under the title The Crisis, urging the colonists to actively fight for independence–at a time when Washington’s Continental Army, the hope of the Revolution, was broken and starving at Valley Forge. “These are the times,” Paine wrote, “that try men’s souls.”

After the Revolution, Paine left the United States to live quietly in London. The outbreak of the French Revolution in 1789, however, once again sparked the revolutionary in him, and he traveled to France, where he would spend most of the later part of his life. Although he didn’t speak any French, Paine threw himself into the French Revolution–he was granted honorary French citizenship and was elected to the revolutionary National Assembly. His pamphlet The Rights of Man was widely circulated in France. When he opposed the excesses and dictatorial methods of Robespierre and the Jacobins, Paine was arrested, and a law was passed excluding foreigners from the Assembly. While in prison awaiting execution, Paine wrote The Age of Reason, a seething criticism of Christianity and the churches. He also wrote a letter to President Washington, accusing the US government of betraying and abandoning him.

Only a quirk of fate spared Paine from death at the guillotine. The night before a number of executions were to be carried out, the jailer placed a chalk mark on the cell doors of the condemned. By happenstance, the door of Paine’s cell was open at the time, and the jailer placed his chalk mark on the inside of the door–where it was overlooked the next day while the cell door was closed.

After the fall of Robespierre, Paine was released and returned to the French National Assembly. True to form, he was one of only three Assembly members who voted against the French Constitution of 1795, because it did not allow for universal suffrage.

Within a few years, Paine was actively opposing the growing power being gathered by Napoleon Bonaparte, calling him a “charlatan”. He likely would have ended up in a French prison again, had the American President Thomas Jefferson not invited him back to the United States. Paine returned to the US in 1802, where he found that his radical views still made him an outcast. When he died in 1809, only six people attended his funeral.

Even today, Thomas Paine remains the only major figure of the American Revolution to have no monument or memorial anywhere in Washington DC.