The Arab-Israeli conflict is one of the longest-running disputes in world history. It has produced over half a dozen wars and invasions, several uprisings and rebellions, the dislocation of huge numbers of refugees, decades of shootings and bombings from both sides, numerous failed peace plans, and the introduction of chemical and nuclear weapons into the world’s most volatile region. For the Palestinians and the Israelis, intense nationalism and deep religious emotions on both sides often make rational dialogue all but impossible; for the rest of the world, critical economic interests are at stake.

NOTE: It is, sadly, necessary for me to state this: in this post, I don’t take either side. My intention is solely to place the Arab-Israeli conflict into its historical perspective, and to describe how it all started. 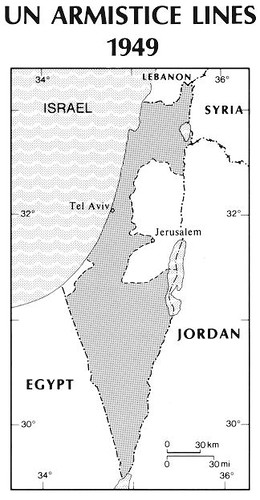 As with so many modern world conflicts, the Israeli-Arab dispute is the result of European imperialism. In the Middle East, as well as Africa and Asia, the European powers–particularly the British and French Empires–unilaterally decided the borders of newly-created nations, and, sitting comfortably in London or Paris, arbitrarily drew their lines on a map based solely on their own national interests, regardless of traditional ethnic or tribal boundaries or the actual situation on the ground. The result has been 100 years of strife.

Modern European involvement in the Middle East was a direct result of the military needs of the First World War. In 1914, most of the Arab world had been under the control of the Turkish Ottoman Empire since the end of the medieval Crusades. The Arabs chafed under Ottoman rule, while the area was virtually ignored by most Europeans–with one notable exception. In the latter half of the 19th century, a political and social movement called “Zionism”, led by Theodore Herzl, appeared among European Jews. The goal of Zionism was to establish a Jewish homeland in the historical region of Israel. European Jews were encouraged by Herzl to emigrate to the area around Jerusalem, purchase land from the Turks, and establish an autonomous Jewish homeland. Jewish settlers from Europe and Russia (where anti-Semitism was rampant) began to arrive in large numbers. They formed large collective farms known as kibbutz, and founded several Jewish towns including Tel Aviv.

When World War One broke out in 1914, the Ottoman Empire joined with Germany and Austria-Hungary against Britain and France. After a British attempt to invade Turkey and take it out of the war failed, at Gallipoli, the Allies sent British Army officer T.E. Lawrence to the Arab tribes to organize a rebellion. Lawrence’s guerrilla war tied down large numbers of Turkish troops, and he became known to history as “Lawrence of Arabia”. Lawrence’s contacts with the Arabs led to diplomatic notes between the British Government and the Arab tribal leaders in Mecca (now known as the MacMahon-Hussein Correspondence), in which the British offered an independent Arab homeland after the war, in exchange for Arab help in fighting the Turks.

Instead, before the war was even over, Britain and France signed the Sykes-Picot Agreement, which divided up Arab territory between themselves as colonial possessions. The French and British interest in the area was military–modernized European navies had only recently changed from coal-fired engines to oil, and the Middle East was already known to possess large oil deposits. The economic oil interests of the Western world would dominate Middle Eastern politics for the next 100 years.

The Arabs viewed the Sykes-Picot treaty as a betrayal, and Arab-British relations soured (though the Arabs continued to fight against the Turks). Meanwhile, Jewish settlers near Jerusalem organized their own military unit, under Ze’ev Jabotinsky, to fight against the Turks. As the Zionist movement gained support in Europe and particularly in Russia, the British government decided to approach it as another ally. This became particularly important after the March 1917 Russian Revolution removed the Tsarist Government from power, and the British were desperate for a way to keep Russia in the war. As a result, in 1917 the British Foreign Ministry issued the Balfour Declaration, which supported the goal of an independent Jewish state in the Middle East at the end of the war. Within three years, the British had now promised the same region of land–land which wasn’t Britain’s to begin with–to three different people.

In 1918, the Arab tribal leader, Faisal, and the leader of the World Zionist Organization, Chaim Weizmann, agreed to support each other’s claims to independent statehood, with the area around Mecca becoming an Arab kingdom and the area around Jerusalem becoming a Jewish homeland. As part of this agreement, the settlement of Jews from Europe and Russia into Palestine was to be encouraged, and the Jewish homeland would give economic assistance to the Arab kingdom. Faisal added the proviso that the agreement would only go into effect after the Arabs were granted independent states in Syria and Iraq. Instead, the Sykes-Picot Agreement divided those areas between France and Britain, and the Arabs declared the Faisal-Weizmann agreement void.

By 1922, moreover, frictions began to appear, as both sides argued over the terms implied in the MacMahon Correspondence and the Balfour Declaration. In June 1922, the British Government issued a White Paper that “clarified” its position–but this only added to the confusion. The White Paper declared that it had only been the intention of the British to form an autonomous Jewish homeland within the state of Palestine, not a separate Jewish State. On the other hand, the White Paper also declared that the Arab homeland it had promised did not include the area of Palestine, and announced that Palestine should be administered internationally by the League of Nations. And in fact in 1922 the British Government was issued a Mandate by the League to govern Palestine. Under the British mandate, Jewish immigration into Palestine was greatly accelerated–particularly after the Fascists took control of Italy and the Nazis appeared in Germany. In 1922, Jews made up 11 percent of the population of Palestine; by 1931 this was 17%. In order to increase their economic self-reliance, the Jewish community in Palestine began to exclude the employment of Palestinian Arabs in Jewish-owned farms and businesses–a move which angered the Palestinians.

In 1936, the Palestinian Arabs broke out in street riots aimed at both the Jewish community and the British Mandate. To protest against economic discrimination, a general strike was called from April to October. Demonstrators demanded an end to the British policy of Jewish immigration, and demanded an independent Palestinian nation. Guerrillas began sabotaging the trains and the newly-built British pipeline which carried oil to the port cities. In response to the riots, the Jewish community formed its own paramilitary militia called Haganah–then a splinter group from Haganah, called the Irgun Zvai Leumi, began carrying out terrorist attacks on both Palestinian rebels and the British government, hoping to establish an independent Jewish state.

The Arab Revolt, and the Jewish response to it, ended any hope of a single bi-cultural state of both Arabs and Jews in Palestine, and the British, now being attacked by both sides, began looking for a way out. In 1936, the Peel Commission was formed, and it recommended that the area of the British Mandate be partitioned into two independent states–one Jewish, the other Palestinian. In 1939, the British released another White Paper, renouncing the goal of an autonomous Jewish community within Palestine, as envisioned by Balfour, and also rejecting the idea of partition as impractical. Instead, the British declared, the immigration of Jews from Europe would be sharply curtailed, and the Jews already in Palestine would simply become ordinary citizens of the Palestinian state.

The new British policy did not help. The British restriction on immigration to Palestine closed off an avenue of escape for Jews who suffered under Hitler and the Holocaust–even as large numbers of illegal immigrants arrived in Jerusalem anyway. The Arab leaders no longer trusted the British, and a few of them made overtures to the Nazis. Some Arabs began to call for the expulsion of the illegal Jewish immigrants–and some wanted to expel all the Jews, legal or illegal. Argument also broke out over the status of Jerusalem, which both groups considered as a holy city and their capitol. When the British tried to mediate negotiations, the Arabs refused to meet face-to-face with the Jews–or even use the same entrance to the building as them.

In 1947, the British were able to pass off the entire mess they had created to the newly-established United Nations. The UN’s Special Committee on Palestine recommended a partition plan, forming independent Jewish and Palestinian states with Jerusalem as a neutral “international city”, and this was adopted in UN Resolution 181. The Arab leaders, which had organized themselves into the Arab League, rejected the idea.

When the British Mandate expired on May 14, 1948, the State of Israel declared its independence and claimed sovereignty over the territory granted to it by the UN partition plan. In response, the Arab league invaded. In what Israelis now refer to as “The War of Independence”, Haganah became the core of the Israeli Defense Forces which fought against the Arab armies. At the same time, the terrorist group Irgun and its offshoot, the Stern Gang, carried out bombings and assassinations in an effort to drive Arabs out of partitioned land. The Arab armies were beaten, and Israel found itself in possession not only of its partitioned territory, but also a part of Palestine’s partitioned area. The 1949 peace treaty set this as the recognized legal borders of the State of Israel. The fighting has continued ever since.

Over the decades, many more events would influence the course of Middle East history. But the roots of the conflict were already set by the British, way back in 1915.

One thought on “The Arab-Israeli Conflict: An Historical Overview”