With its stark-white plumage, red face, and its long curved pink bill, the White Ibis is a familiar sight in Florida. Flocks of them can be seen wading in ponds, probing for food on lawns, or flying overhead. 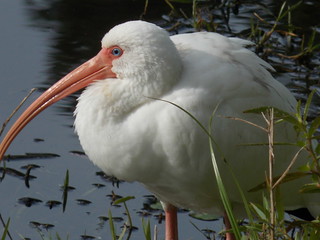 The White Ibis, Eudocimus albus, is a member of the Threskiornithidae family, which includes 34 species of ibis and spoonbills. DNA analysis shows them to be related to the Pelican family. Ibis species can be found virtually worldwide. In Egypt, the Sacred Ibis was believed in ancient times to be the symbol of the ibis-headed god Thoth, and thousands of the birds were mummified and buried as offerings to the gods.

Florida has two native species of Ibis, the White Ibis and the less-common Glossy Ibis. Both species range around the Gulf Coast and up the southeast Atlantic coast, and across the Caribbean to Central and South America, where they are replaced by the Scarlet Ibis (which may be just a color variant of the White Ibis species–in parts of southern Florida where Scarlet Ibis have been introduced, the two have been observed interbreeding). A small population of Sacred Ibis has become established in Palm Beach County, Florida, that may have blown here in a storm in 2000, but so far there are no indications that those birds are expanding their range.

The White Ibis is a largish wading bird, standing about 22 inches tall and with a wingspan around three feet. They are our most common waterbird. The feathers are white with black wingtips, the long down-curved bill is pink, the face and legs are red. Males have longer bills.

White Ibis generally move in flocks. They are often encountered in urban parks and suburban lawns, where they move along as a group probing the soil with their bills, looking for worms and insects. Although the birds have excellent eyesight, they hunt mostly by touch. They can also be found in freshwater ponds and saltwater shores, probing the sand and shallow water for slow-moving animals like crayfish and snails (they’re not generally very good at catching fast-moving fish).

Ibis can breed in Florida at virtually any time of the year except winter, seeming to pick any time and place where food is plentiful, but most nests are made in spring and early summer. These are large piles of sticks, leaves and grass, which can be either on the ground or up a tree. The birds prefer to nest in large colonies, for protection. Two to four eggs are laid per nest, which hatch after about three weeks. The young birds stay in the nest for about a month before being able to fend for themselves. Young White Ibis are a grayish brown color, gradually turning white as they reach one year of age.

Unlike the more showy egrets, the Ibis were never hunted in Florida for their feathers, and so never suffered the population loss that other shorebirds did. They have suffered somewhat from loss of their shoreline habitats due to development, though, and Florida has placed them on its list of “Species of Special Concern”.

One thought on “Wild Florida–White Ibis”