In evolutionary terms, the humble domestic chicken is one of the most successful species on Earth. There are an estimated 20 billion chickens alive right now–almost three times as many as there are humans. Apparently, “tasting good to people so they’ll protect you” is a pretty effective evolutionary strategy–well, aside from that whole “they eat you” thingie. Statistically, every human on the planet eats the equivalent of 27 individual chickens every year. The only other terrestrial vertebrate that may rival the chicken in sheer numbers is the Norway Rat.

And even the lowly chicken has important things to teach us. It was through the careful observation of a backyard chicken flock that one of the most important principles of social biology was uncovered–one that applies equally well to humans. 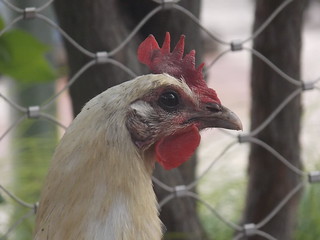 Not such a dumb cluck after all….

In 1904, a ten-year old boy named Thorleif Schjelderup-Ebbe was placed in charge of caring for the flock of chickens on the family farm in Kristiania, now the city of Oslo, Norway. Thorleif had a keen interest in nature and animals, and as he began to carefully watch the behavior of the chickens, he wrote down detailed descriptions and observations in a daily journal.

For over 4,000 years, since the Red Jungle Fowl was first domesticated in Southern Asia, farmers had noticed that a flock of hens was a very orderly group. At feeding time, the dominant birds in the flock would eat first, picking out the best morsels, then came the less-dominant birds, and finally the least dominant who got whatever was left. Farmers knew that if anything happened to disrupt this order–introducing a new bird to the flock, for instance, or removing one of the dominant birds–there would be a brief period of discord as birds fought with each other to re-establish dominance, then peace would reign once again.

But it wasn’t until ten-year old Thoreiif began his years of observations, however, that anyone finally began to get a clear picture of how this flock order was established and maintained. Through years of recorded data, he realized that there was a hierarchy within the flock. The dominant hen at the top got first choice at all the food and the best roosting spot–and if any other bird tried to chisel in on her prerogatives, she would quickly peck the usurper into submission. (And this was not based solely on size–the older more worldly-wise hens were often able to dominate even bigger naive young birds.) The second-ranking bird, on the other hand, was able to peck any subordinate, but dared not try to assert herself against the dominant bird. And so it went down the line, with each hen pecking the birds ranked below her and in turn being pecked by those above her. When Thorleif became a zoology student at the University of Oslo and wrote his PhD thesis in 1921, on the social structures of birds, he called this the “pecking order”. The concept of the “dominance hierarchy” and “pecking order” was quickly applied to social animal groups ranging from fish to wolves to humans.

For the most part, the resulting social order is peaceful–each chicken knows her place, and stays in it. It is a rare thing to see open combat over dominance in any well-established flock, unless there is some sort of disruption. (Though the pecking order itself could occasionally change as older birds grew too weak to defend their position, or younger birds became more experienced and able to move up in rank.) Only over a period of several years was Thorleif able to see enough examples of fighting to detect the pattern that lay beneath them. Later experiments by other researchers established that the chickens in a flock need not even engage in actual combat to determine who was dominant to who–the birds were able to learn their own place by watching the results of fights with others. If Chicken Two beats Chicken Three in a fight, for instance, Chicken Four will learn that she cannot mess with Chicken Two, even if they have never fought. In fact, researchers found, Chicken Four will be submissive to Chicken Two even if they had never seen each other before–and remains so even if they are then separated for months or years and reintroduced.

Far from being the dumb-as-a-rock “chicken brain” of popular image, barnyard chickens, like most other social animals, were capable of understanding and retaining an enormous amount of information about their social surroundings, keeping intimate detailed track of who was dominant over who, and which birds each individual had to defer to.

But, Thorleif realized, the pecking order was not a simple linear ladder, which fell neatly into a rigid set of rungs. Many times, he had observed instances where Chicken One would dominate Chicken Two, Chicken Two would peck Chicken Three–but Chicken Three was often able to assert herself against Chicken One. Thorleif called these situations, “triangles”.

In 1951, mathematical sociologist HG Landau published a paper titled “On Dominance Relations and the Structure of Animal Societies”, which explored these “triangles” further. Landau found that the traditional dominance hierarchy, in which each bird dominated the ones below it and deferred to the ones above it (situations that Landau labelled as “Kings” and “Serfs”), was not the only possibility. By using the mathematical branch of Graph Theory, Landau was able to demonstrate that there were a number of different stable configurations between Kings and Serfs. It was possible, for instance, to have more than one King in the flock–each dominant over all the others except themselves. It was even mathematically possible to have a flock of all Kings, where each bird dominated just one other bird in a circular pattern with no top or bottom.

Landau’s mathematical model became known as “The King Chicken Theorem”, and the mathematics behind it is called “Tournament Theory”. Today, Tournament Theory is applied to everything from round-robin sports matches to the stock market to the design of computer chip pathways.

Another discovery made by Thorleif Schjelderup-Ebbe in his parents’ chicken coop, however, also had unexpected relevance to human evolution. Thorleif found that if the size of the flock grew above thirty birds or so, the chickens were unable to remember all the social relationships, and their pecking order completely broke down. Now, instead of the orderly peaceful social group they had been living under, no bird knew its place, and every bird tended to occasionally try to assert dominance over another, at random. Over the centuries, chickens have been bred for size, egg production and meatiness, but they have not been selectively bred for disposition–and in the absence of a social hierarchy to keep them in check, chickens are naturally aggressive and quarrelsome birds (after all, they were originally used by humans for cockfighting, not as food animals). In very large flocks, then (such as the thousands of birds in a typical poultry “factory farm”), bird on bird violence is constant and never-ending. To add to the problem, chickens are naturally triggered by bright red colors (which is why roosters have bright red combs at breeding time). Once a hen in a flock pecks another hen so it bleeds, the bright red wound then attracts the rest of the flock who peck at it also, usually causing fatal damage. Some chicken farms attempt to stop this by keeping the birds under constant red light bulbs, which makes the bright red colors look duller and lessens the triggered aggression. But by far the most common method of preventing injury and death in the super-enormous flock is to “de-beak” all of the chickens, by cutting off the sharp end of their beaks with an electrically-heated trimmer so they can’t peck each other.

In 2003, a British evolutionary psychologist named Robin Dunbar randomly selected a number of English families and made a simple measure–how many Christmas cards did they send out every year to friends, family and acquaintances? What Dunbar found, was exactly what he had already expected to find. Nearly all of his test subjects, no matter where they lived or what their profession or their level of education or income, sent out roughly 150 Christmas cards.

How had Dunbar made that prediction? After Landau’s studies on chicken societies, biologists had also began studying primate societies. (One of the leading figures in this effort was paleo-anthropologist Louis Leaky, who dispatched three of his students to study apes in the wild, hoping it would provide insight into how early hominid societies functioned–Birutė Galdikas was sent to Borneo to study Orang-Utans, Dian Fossey was sent to Rwanda to study Gorillas, and Jane Goodall was sent to Tanzania to study Chimpanzees.) It was soon discovered that there seemed to be a mathematical relationship between the size of a primate brain’s cortex (the part of the brain that handles conscious thought, memory, and learning) and the number of individual members in that species typical band–the bigger the brain, the bigger the troop size. In 1992, Robin Dunbar applied this mathematical relationship to humans, and found that a typical human “troop” should contain about 150 individuals. This became known as “Dunbar’s Number”, and it relates directly to the chickens. Just as the chicken brain can only remember and process about 30 different social relationships, the human brain can only handle about 150. Like the chickens, if you exceed the rough maximum number of social relationships that the human brain can handle at once, the whole system collapses. While you may live in a city of 15 million people, or have a million “friends” on the Internet, you can’t actually “know” more than 150 of them–everyone after that is just a name, no different than a stranger.

Dunbar’s Number turns up in all sorts of areas in human society. A typical early human hunter/gatherer community had about 150 members. Most military forces through history are organized into basic units of about 150–from the Roman “Maniple” to the modern “infantry company”. A typical local branch for a fan club will have about 150 active members. Most academic sub-disciplines have about 150 experts who specialize in it. When asked to list from memory all the people they personally know, by name, most people will list about 150 names. When a particular human social group grows to exceed Dunbar’s Number, and therefore becomes too big for all of its members to know each other, it will usually split into two separate groups.

In primate groups, bigger numbers mean better protection, as the larger group is more effective at detecting and fighting off predators and defending the group’s territory from incursions by neighboring groups. But more social members also means more social relationships to keep track of–and as primate society became more complex (unlike chickens, primates are able to form social alliances and friendships that allow them much more power and flexibility inside the dominance hierarchy), the number of possible social permutations grows exponentially. The human version of the King Chicken Theorem is enormously complex. The result was a ratcheting effect during hominid evolution–bigger and more complex social groups led to bigger and better brains to process all that new social information, which in turn allowed larger social groups to form.

Our big brains, which allow us to ponder the universe, evolved so we could keep track of who we could pick on in the social pecking order, and who could pick on us. In the end, chicken politics and human politics are not that much different from each other.

3 thoughts on “Chicken Politics: Life in the Flock”