It is the most famous mutiny in naval history: in December 1787, the British Navy ship HMSBounty set sail for the islands of Otaheite (now known as Tahiti) under the command of William Bligh, on a mission to obtain breadfruit plants for transplant to the colonies in the Caribbean. The mission was never completed . . . 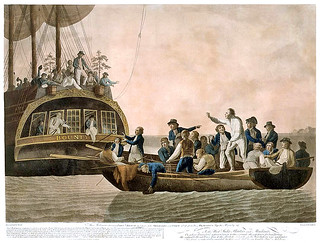 A contemporary painting. The mutineers set Capt Bligh and his officers adrift in a small boat, and throw the cargo of breadfruit plants overboard.

The Bounty reached Tahiti in October 1788, and spent the next five months raising and preparing breadfruit seedlings before departing for the Caribbean in April 1789. During this time, the crew were permitted to live on shore in Tahiti; several adopted local Tahitian wives. The typically strict Royal Navy discipline was allowed to slacken.

On April 28, 1789, when the Bounty was over a thousand miles away from Tahiti on the way back to the Caribbean, a mutiny broke out, led by first officer Fletcher Christian. Eighteen men out of the crew of 42 remained loyal to Bligh. Bligh and a number of the still-loyal officers and crew were placed adrift in the ship’s longboat with a supply of food and water. Over the next 47 days, Bligh and his crew took the open longboat over 4,000 miles to the closest friendly port–the Dutch-held island of Timor in modern Indonesia.

When Bligh arrived back in London in March 1790, he was, in accordance with standard practice, placed before a court martial for the loss of his ship.  Although he is popularly depicted today as a cruel man who had driven his crew to mutiny through his ruthlessness, the court concluded that his discipline was no more harsh than any other Royal Navy Captain, and was perhaps even too lax. The judge cleared him of any blame, and  concluded that the mutineers had been motivated by the desire to live an easy life in the tropical paradise of Tahiti.  The judge in fact commended Bligh for his actions in the remarkable journey that had saved the lives of the men who had been set adrift with him.  He was promoted to the rank of Captain (although he was the commander of the Bounty, his military rank had actually been only a Lieutenant).

The Royal Navy dispatched the HMS Pandora to Tahiti to begin searching for the Bountymutineers.  Two of the crewmen who had been adrift with Bligh accompanied the Pandora’scaptain, Edward Edwards, to help identify anyone they came across.  When the Pandora reached Tahiti in March 1791, they found 14 of the Bounty’s crew there.  Two others, Churchill and Thompson, had also abandoned the Bounty for Tahiti, but had been later killed in arguments.  The 14 remaining mutineers were placed in chains aboard the Pandora for the trip to England.  Along the coast of Australia, however, the Pandora was battered by a storm and sank.  Four of the mutineers drowned in the shipwreck.  The rest were rescued and returned to England, where they faced a court martial.  Three mutineers were hanged, two were pardoned, and the rest were acquitted.

Fletcher Christian was not among the mutineers found at Tahiti.  After seizing the ship, Christian was elected as the new captain and promptly sailed back to Tahiti.  Christian, however, knew that the Royal Navy would come there searching for them, and convinced much of the crew to leave.  A number of mutineers sailed the Bounty to the island of Tubuai, but it proved unsuitable.  Christian returned again to Tahiti, where several more crew members elected to stay.  Shortly afterwards, 9 mutineers—Fletcher Christian, John Mills, Edward Young, William McCoy, Isaac Martin, Matthew Quintal, William Brown, John Williams, and Alexander Smith—left Tahiti, accompanied by 6 Tahitian men, 12 Tahitian women, and one Tahitian infant.

When they found Pitcairn Island in January 1790, they realized that its location had been incorrectly placed on the Royal Navy’s charts, and that it would be nearly impossible for any British ship to find it.  Taking everything of value from the Bounty, they burned the ship to the waterline.

Of the four remaining crew members, one later committed suicide while drunk, and another was killed during a fight.  When Ned Young died of respiratory problems in 1800, Alexander Smith became the only surviving mutineer.  His real name was John Adams—he had enlisted under an assumed name to avoid arrest in England.  At Pitcairn, Adams became a devout Christian and set up a school for the island’s children, all of whom were offspring of the original settlers from theBounty.

Although several ships stopped at Pitcairn Island over the years, none of them discovered the group of mutineers and their descendants until 1808, when the American ship Topaz landed on the island.  Adams told the American captain what had happened to the mutineers, and gave him the Bounty’s logbook and chronometer to verify his story.

When the British Admiralty was informed of the discovery, they sent two warships, the Britonand the Tagus, to Pitcairn Island.  They arrived in 1814.  Upon noting the work that Adams was doing as a leader of the island’s population, the British decided not to take him back to England to stand trial.  Adams died in 1829.

Today, Pitcairn Island is still a British possession, and most of the island’s population are descended from Fletcher Christian, John Adams, and the other Bounty mutineers.

After the Bounty mutiny, Captain William Bligh was given command of the HMS Providence, and in 1791 returned to Tahiti to complete the Bounty’s mission of bringing breadfruit trees to the Caribbean, where they were intended to serve as cheap food for slaves. Ironically, they were found to be unsuitable when the slaves refused to eat them.

In 1797, sailors on a number of Royal Navy ships at the anchorages of Spithead and Nore mutinied, demanding better pay and an end to involuntary “impressments” into the Navy.  Although Bligh’s crew joined the mutiny, Bligh was not aboard.  The leaders of that mutiny were later hanged.

In March 1805, Bligh was appointed as Governor of New South Wales in Australia.  Eighteen months after he took over, the Rum Rebellion broke out.  When Bligh attempted to ban the use of alcohol as payment for trade items, local Australians rebelled, and the British Army Corps under Major George Johnston marched on the Governor’s house and arrested him.  Bligh was a virtual prisoner until a new British Governor arrived in 1810.

In the aftermath, Bligh was promoted to the rank of Rear Admiral, and three years later, to Vice Admiral.  He died in London in December 1817.

As always with famous historical events, it seems, a number of conspiracy theories appeared in later years about the Bounty mutiny. The most widely-circulated story is that Fletcher Christian somehow managed to escape from Pitcairn Island and reach England a few years later, living out his life under an assumed name (he was supposedly seen and recognized in London by a British captain who had known him). A newer conspiracy theory postulates that Bligh himself either encouraged the “mutiny” or allowed it to happen in order to cover up the failure of his “breadfruit” mission. There is of course not a shred of evidence for any of this.