The Mexican Revolution was a pivotal point in Mexican history. It produced two of the most popular revolutionary figures in Latin American history–Pancho Villa and Emiliano Zapata. It provoked an invasion of Mexico by US forces. In many ways, it was the first socialist revolution in the western hemisphere, and served as inspiration and model for leftist revolutionaries in Latin America throughout the 20th century. When a group of guerrillas took up arms in southern Mexico in 1994 to fight for economic equality and social justice, they chose the name “Zapatistas”, after the hero of the Mexican Revolution. 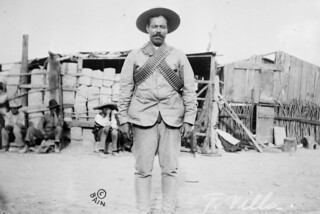 In 1862, Emperor Louis-Napoleon Bonaparte III of France sent military forces to occupy Mexico.  After suffering a defeat at the Battle of Puebla on May 5, 1862 (celebrated today in Mexico as the holiday of Cinco de Mayo), the French armies crushed the Mexicans and sent the elected President Benito Juarez into exile.  In April 1864, an Austrian aristocrat was installed, with French backing, as Emperor Maximilian I of Mexico.

Most nations refused to recognize the new government, and the United States in particular continued to view the government-in-exile of Benito Juarez, who had fled to the north near the US border, as the legitimate government of Mexico.  With American diplomatic backing, Juarez formed an army and captured Mexico City in 1867.  Emperor Maximilian was executed, and Juarez assumed office as President of Mexico.

In 1871, Juarez was re-elected to another term, an event which brought political opposition from those who argued that Presidents should be limited to just one term, and that re-election to consecutive terms was undemocratic.  When Juarez died in 1872, his Vice President Sebastian Lerdo de Tejada assumed office and was himself re-elected in 1876, defeating General Porfirio Diaz, the hero who had beaten the French at the Battle of Puebla.  In response to his loss in the election, Diaz organized an armed rebellion, issuing a manifesto known as the Plan of Tuxtepec, which opposed the principle of consecutive terms, repudiated the presidency of Lerdo, and declared Diaz as the legitimate President of Mexico.  After a short civil war, Lerdo fled the country, and Porfirio Diaz assumed the Presidency in 1877.

Despite his campaign against the “undemocratic” principle of re-election, Diaz promptly took steps to consolidate power in his own hands, and crippled his political opponents through repression and outright assassination.  Using fraudulent elections and arrests, Porfirio Diaz ruled Mexico from 1877 to 1910 as a virtual dictator, either directly or through handpicked successors from his inner circle. His time in power became known as the “Porfiriato“.

In the 1910 elections, Diaz was opposed by a wealthy banker named Francisco Madero. Madero was a rather unlikely revolutionary–he came from a wealthy family, he claimed to be able to speak to ghosts and the spirits of the dead, and he had no real program for social reform, other than removing Diaz from power. But Madero quickly became wildly popular and had thousands of supporters. Shortly before election day, however, Diaz had Madero and several thousand Maderistas arrested, then declared himself the winner of the election by a landslide.  A few weeks later, Madero escaped from prison and was smuggled across the border into the United States, where he called upon his followers to launch a rebellion to overthrow Diaz.  This was the beginning of the Mexican Revolution.

The Maderistas were a loose collection of groups with widely diverging goals, however, ranging from the conservative Orozco to the radicals Villa and Zapata, who quickly became the central figures in the Revolution. Zapata was mayor of a small town; Villa was leader of a bandit group in northern Mexico. Villa and Zapata openly called for land reform, in which the large haciendaranches of the wealthy would be broken up and given to the poor rural peons who worked them for the absentee landowners. Zapata’a army in particular won the support of the Mexican peasants (and the enmity of the landowners) by attacking the large haciendas, seizing them, and giving their land to the local poor. Within a short time, Villa’s army controlled much of northern Mexico, and Zapata controlled a part of the south. Zapata issued a manifesto called the “Plan of Ayala”, which called for social and economic reform, coupled with land reform which would redistribute wealth and land to the peasantry. Zapata’s army was also unique in allowing women to serve as soldiers and as officers.

In 1912, former Maderista General Orozco, by contrast, launched a rebellion in Chihuahua (with the financial backing of the richest landowning family in Mexico) to prevent the process of land reform.  General Victoriano Huerta, a former follower of Porfirio Diaz who had become a Maderista, was sent to put down the Orozco rebellion. Although Huerta forced Orozco to flee Mexico in 1912, friction with Pancho Villa over land reform caused Huerta to order Villa’s execution—an action which was stopped by President Madero.  By 1913, Huerta, along with Felix Diaz, the nephew of the deposed dictator Porfirio Diaz, American Ambassador Henry Lane Wilson, and former opponent Pascual Orozco, was planning a military overthrow of President Madero.  In February 1913, after a ten-day seige, President Madero was captured and General Huerta took power.  Madero was killed four days later, allegedly during a rescue attempt by Maderista forces.

Opposition to the Huerta regime soon centered around Venustiano Carranza, who called his insurrectionaries the “Constitutionalists”.  Pancho Villa threw his support behind Carranza in the north, while Zapata, in the south, fought against Huerta but refused to back Carranza.  In April 1914, the United States, which had been supporting Carranza, sent troops to seize Veracruz, cutting off the supply of European weapons (mostly from Germany) to the Huertista forces.  Huerta fled, and Carranza assumed the Presidency in July.

Within a short time, though, conflict broke out again over the land reform question.  When it became clear that Carranza would not carry out any real land reform, both Pancho Villa and Emiliano Zapata broke away.  In October 1914, 60,000 rebel troops under Villa and Zapata entered Mexico City and forced Carranza to flee.  In April 1915, though, General Alvaro Obregon defeated Pancho Villa in the Battle of Celayas, and Carranza returned to Mexico City with the backing of the United States.

Villa, in desperation, crossed the border into the United States in March 1916 and attacked a US Army outpost, hoping to draw the Americans into sending troops into Mexico that would provoke a widespread nationalist uprising.  The US sent 10,000 troops under General John Pershing (who would within a few years command the American forces in the First World War) into Mexico, where they unsuccessfully pursued Villa for almost a year.

Zapata, meanwhile, was fighting in the south of Mexico, seizing the haciendas and giving them to the poor rural peons under the slogan “Land and Liberty”.  In April 1919, one of Carranza’s generals, Pablo Gonzalez, sent word to Zapata that he wished to defect to the Zapatistas.  When Zapata arrived for discussions, he was ambushed and killed by the general’s troops.

Carranza himself was assassinated by political rivals, including his former General Obregon, in 1920. Obregon took power. Pancho Villa continued to fight with a small army until 1923, when he was ambushed while riding in a car through the town of Parral. Obregon was then assassinated in 1928, removing the last remaining figure from the time of the Revolution.

One thought on “The Mexican Revolution of 1910”