Of all the pirates that have sailed the seven seas, real or imagined, perhaps none is more famous than the legendary Blackbeard. It was not, however, until the wreckage of Blackbeard’s ship, the Queen Anne’s Revenge, was found in 1996 off the coast of North Carolina, that archaeology could begin separating fact from fiction. 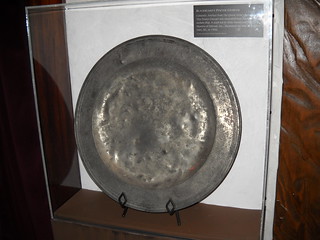 A pewter dinner plate recovered from the wreckage of the “Queen Anne’s Revenge”, the flagship of the pirate Blackbeard. On display at the Pirate’s Soul Museum in Key West, Florida.

Three broad periods make up what is known as the “Golden Age of Piracy”. From 1650 to 1680, pirate ships based in Jamaica and Haiti (known as “buccaneers”) preyed on the Spanish treasure galleons that carried gold and silver from Mexico and Peru across the Atlantic to Spain. The most famous of these were Henry Morgan and Jean Bart. By the 1690’s, as the Spanish Empire began to decline, the pirates turned to ships that carried Muslim pilgrims through the Indian Ocean, and also to the spice ships of the East India Company. The most famous of these were William “Captain” Kidd and Thomas Tew. And finally, in the 1710’s and 1720’s, attention turned back to the Caribbean and tropical Atlantic, and piracy became centered in the Caribbean and the southeastern US coast. The most famous of these were John “Calico Jack” Rackham, Bartholomew “Black Bart” Roberts, Samuel “Black Sam” Bellamy, and Blackbeard.

Virtually nothing is known about Blackbeard’s early life.  Even his real name is uncertain; most sources give it as “Edward Teach” or “Edward Thatch”, but one old source claims his family name was “Drummond”. He was most likely born in Bristol, England, around 1690.

Like most pirates, Blackbeard began his career as a privateer. In 19th century warfare, navies played a crucial role, and all three of the major world powers of the day–France, England and Spain, had large navies that spanned the entire world. In time of war, it was advantageous to attack the enemy’s commercial and cargo shipping, but this took a large number of ships and a lot of resources, which the regular navy could not spare.  As a result, when war was declared, national governments would seek out “privateers”–these were ordinary citizens with their own ships who would be hired by a government under a contract (known as a “letter of marque”) that granted them the right to attack and seize the merchant ships of enemy nations and to keep them as prizes. Privateering was an entirely legal and accepted aspect of 18th century naval warfare. Pirates, on the other hand, were those who crossed the line, and who began indiscriminately attacking merchant ships of any nation even in times of peace. Pirates were considered “the enemy of all nations”.

Most historians agree that Blackbeard served as a privateer for the English during Queen Anne’s War, also known as the “War of Spanish Succession”  (1701-1714). When this war ended, most of the privateers found themselves unemployed and decided to utilize their naval skills for their own self-interest by becoming pirates. The first official mention of Blackbeard is in early 1717, when a British Navy Captain mentioned a pirate named “Thatch” who was operating off the coast of North Carolina. Most historians agree that Blackbeard was a part of the pirate fleet in that area commanded by Benjamin Hornigold and Stede Bonnet. (Modern tales usually depict pirates as single large renegade ships, but in reality most pirates operated in small fleets of light fast vessels like sloops to surround and overpower their prey.) When Bonnet’s crew rebelled against him, Blackbeard was placed in command of his ship, the Revenge. Bonnet stayed with the fleet, though, and would later captain several of Blackbeard’s captured ships. (Pirate ships were democratically-run; the captain was elected by the crew, and each ship had written agreements concerning how loot was to be divided–there was even provision for cash payments to be made for pirates who were disabled in action.) Later in 1717, Hornigold’s crew also became rebellious, and he gave up piracy and sailed away to accept a pardon from the King, leaving Blackbeard with the 12-gun Revenge and another 8-gun sloop.

Blackbeard left the US coast and based himself in the Caribbean. Shortly later, the Dutch-built French slave ship La Concorde, returning from Africa, passed the island of Martinique, where Blackbeard and his two sloops found her. After two volleys of cannon fire, the French surrendered. Blackbeard took the ship to the nearby island of Bequia, seized its cargo (including a supply of gold dust), and put the French crew ashore with the African slaves. Four of the French crew voluntarily joined the pirates–ten more, including a navigator, three surgeons and two carpenters, were forcibly taken along. Leaving behind the smaller of his two sloops for the remaining French to sail home in, Blackbeard took La Concorde to the Antilles Islands, fit her with additional cannons (40 in all), and renamed her Queen Anne’s Revenge. He spent the rest of 1717 raiding ships across the Caribbean. He captured one sloop off the coast of Honduras, and another off Cuba. By April 1718, Blackbeard commanded a pirate fleet with at least eight ships and 300 pirate/sailors.

By this time, Blackbeard was a legend, and sailors whispered stories about him that were perhaps true, perhaps not.  It was said that Blackbeard often carried a number of lighted fuse-matches under his hat and through his beard, to surround himself with smoke and enhance his devilish reputation. His flag consisted of a skeleton stabbing a bleeding heart with a spear while raising a toast to the Devil. Despite his fearsome reputation, however, there is no evidence that Blackbeard ever killed or harmed any of his captives.

Leaving the Caribbean and turning north, Blackbeard then carried out one of the most daring pirate actions of all time. Upon reaching the unprotected city of Charleston, South Carolina, in May 1718, his fleet of pirate ships blockaded the harbor for five days, seizing at least nine ships and their crew and cargo, and shutting down the most important shipping port in the English colonies. As ransom for the prisoners he had taken, Blackbeard demanded a chest of medical supplies, which was duly delivered.

Leaving Charleston, Blackbeard’s fleet sailed north and attempted to enter Beaufort Inlet, North Carolina. It was common for pirate ships, with their shallow draft, to hide out in bays or coves where larger naval ships could not follow, but this time, Blackbeard’s two largest ships, the sloopAdventure and the Queen Anne’s Revenge, ran aground on a sandbar. Blackbeard transferred a handpicked crew to one of the other sloops, abandoned the two wrecks, and left most of the remaining pirates behind.

Bonnet left the fleet and sailed to Charleston to accept a Royal Pardon. In 1717, King George I of England had issued “The Act of Grace”, granting a full pardon to all pirates who surrendered to English authority before September 5, 1718. England was expecting another war with Spain in the near future, and pardoned pirates were often offered the opportunity to become privateers if war were to break out.

There is some speculation that Blackbeard, also interested in a pardon, had deliberately grounded his ships and disbanded his crews, and that he wanted to see if Bonnet would receive a pardon before applying for it himself. Whether intentional or not, that is what happened. In June 1718, Blackbeard sailed into the port of Bath, near Ocracoke Inlet, North Carolina, and accepted his Royal Pardon. He was given title to his remaining ship, the sloop he now renamed Adventure, and was granted permission to sail to St Thomas to seek a privateer’s letter of marque from the English Government.

But by August 1718, no war with Spain had yet begun, and Blackbeard had returned to piracy, and was raiding ships off the mouth of the Delaware River. The Royal Governor of Pennsylvania issued a warrant for him and sent out two ships, which failed to find him. Then in November the Royal Governor of Virginia sent two ships under Lt. Robert Maynard to track down Blackbeard. On November 21, Maynard caught up with Blackbeard at Ocracoke Inlet on the North Carolina coast, and attacked the next morning. The Adventure pulled up alongside Maynard’s ship and sent a boarding party, with Blackbeard at its head. Blackbeard was killed in the fight, and Maynard returned with the pirate’s head. According to legend, Blackbeard had been shot nine times and cut with a sword twenty times, and the headless corpse swam around the ship three times before sinking.

The Queen Anne’s Revenge, in the meantime, rotted quietly where she had run aground in 1717. It wasn’t until November 1996 that a team of researchers, using the historical data, located the remains of a Dutch-built ship with a large number of cannon, that they identified as Queen Anne’s Revenge. The wreck is now under the ownership of the State of North Carolina, which has been undertaking a systematic underwater archaeological excavation to raise and preserve artifacts from the ship. So far, over a dozen cannon, several cannonballs, blunderbuss guns, anchors, barrel hoops, plates, grappling hooks, medical instruments, and other artifacts have been recovered. More than 300 artifacts from the ship are now housed in the North Carolina Maritime Museum in Beaufort. A number of artifacts have also been placed on loan to other museums in the US for display.

One thought on “Blackbeard and the Golden Age of Piracy: A History of the Pirate Ship “Queen Anne’s Revenge””