For most people who see a Key Deer, their first thought is “Awww, how cute!”. Not much bigger than a dog, Key Deer look like an ordinary Whitetail that got left in the dryer too long and shrunk. 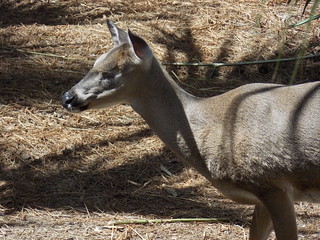 The Key Deer, Odocoileus virginianus clavium, is a subspecies of the ordinary ubiquitous Virginia Whitetail Deer, but the Key Deer is found only on the islands of the Florida Keys–particularly Big Pine Key. It is an example of a phenomenon known as “island dwarfing”, in which a population of large animals that finds itself living isolated on an island, often responds by becoming smaller in size. Other examples include the pony-sized Island Mammoths that used to live on Wrangel Island near Siberia, dwarf Elephants that once lived on Crete, and dwarf Emus that once lived on islands around Australia. The Key Deer stand only 28 inches high at the shoulder and weigh around 75 pounds, compared to mainland Whitetail Deer at 48 inches high and 200 pounds. It is sometimes called the “Toy Deer”.

Although Key Deer are very good swimmers and can easily cross the channels between islands, it is thought that the original Whitetail ancestors crossed over the land bridge that once connected the Keys to the Florida mainland during a dry period of glaciation, about 20,000 years ago. Over time, as the ice melted and sea levels rose, cutting off the islands, the deer became smaller in size to cope with the small land area and its limited food resources. The Key Deer has also developed a much higher tolerance to salt than other deer, being able to drink occasional amounts of brackish water during the dry season, and also able to eat the salty leaves of the mangrove tree.

When Europeans first arrived in Florida, the Key Deer could be found on all of the larger islands in the Keys which have permanent freshwater sources. During the 1920’s land boom in Florida, however, the Keys were a prime target for development, and hotels and housing quickly eliminated most of the Key Deer’s habitat, and hunting killed off a number of them. Many islands were completely exterminated. By the 1940’s, there may have been as few as 50 individual deer left in the entire island chain.

In 1951, the National Wildlife Federation began an intensive campaign to save the Key Deer from extinction, and in 1957, the National Key Deer Refuge was established on Big Pine Key, and numbers began to grow again. Today it is estimated that there are around 800 Key Deer in the wild–about two-thirds of these are on Big Pine Key, and the rest are scattered on the many smaller islands around it. But because of its limited habitat area, the Key Deer is still listed as an Endangered Species by the Federal government.

Breeding occurs in late autumn, after the bucks have grown their antlers. The tiny fawns–only 5 or 6 pounds at birth–are born around May. In the wild, Key Deer live for 3-6 years.

The deer have proven themselves to be adaptable. Crowded into their small islands, they had always been forced to use widely different habitats, from open scrub to mangrove forests.  As people have moved in (Big Pine Key is itself 60% developed), the deer have adapted further, and now use backyards as habitat, feeding on ornamental plants. For the most part, the deer and the humans get along pretty well together.

But there is one major danger that the deer have not learned how to deal with–cars. About 50 Key Deer a year are killed in collisions with automobiles, by far the leading cause of death among adult deer. Part of the reason for this is well-meaning tourists who feed the deer from their cars–the Key Deer is, like most island mammals, extraordinarily trusting and shows no fear of humans. Unfortunately, this also teaches the deer to approach the roads and not to be afraid of cars.

Another danger that has threatened the deer are dogs. Free-roaming and feral stray dogs will attack and kill deer, especially fawns.

But the real danger to the deer remains loss of habitat. The human population on Big Pine Key alone has grown, in the past 50 years, from just 7 people to over 5,000. In 2006, the US Fish and Wildlife Service and the Monroe County government formed a plan to protect the deer’s habitat from development, and wildlife conservation groups are attempting to purchase as much land as possible in the deer’s range to preserve it. The Lowry Park Zoo in Tampa is one of several groups working to breed Key Deer for relocation on other islands. But as of now the Key Deer still remains concentrated on just a small number of islands, where the entire population remains critically vulnerable to human encroachment and to a natural disaster such as a disease outbreak or a major hurricane. So the future of the Key Deer remains far from certain.