The automobile has been a central part of American culture since the early 1900’s–and has been a part of Presidential history for just as long. From the earliest Stanley Steamers to the special-built Cadillac limousine (referred to by the Secret Service as “The Beast”) used by Barack Obama, here is a history of Presidential limousines.

The first “true” automobiles, four-wheeled with gasoline-fueled internal combustion engines, were made in Germany; Karl Friedrich Benz produced his first model in 1885, followed by Gottlieb Wilhelm Daimler in 1886. The first practical electric car was introduced in 1891, by Scottish immigrant William Morrison, of Des Moines, Iowa. And in 1897, two twin brothers, Francis and Freelan Stanley, began manufacturing a steam-powered car, called the Stanley Steamer, in Massachusetts.

In 1899, the Stanley brothers, as a marketing stunt, visited the White House and offered a ride to President William McKinley. McKinley had his doubts about the safety of the contraption and agreed only reluctantly; afterwards he told people that the automobile would never replace the horse carriage as a mode of transportation. McKinley was of course wrong about that–but he does go down in history as the first President to ever ride in a car.

After McKinley was assassinated in 1901, President Teddy Roosevelt took office. Under his term, the White House purchased its first automobile, a Stanley Steamer, but Roosevelt seldom used it–an avid outdoorsman, he always preferred his horses. It wasn’t until Roosevelt’s successor William Howard Taft was in office that the first official Presidential limousine, a Model M Steamer made by the White Automobile Manufacturing Company, was obtained. Taft had the horse stable on the White House grounds replaced with a four-car garage, which he filled with two White Steamers and two Pierce-Arrow gasoline cars. He also had a Baker electric car. The Secret Service agents assigned to protect Taft created the White House Transportation Agency to maintain the automobiles, and when Taft was driven around in one of his cars, Secret Service agents always followed in another car behind him. 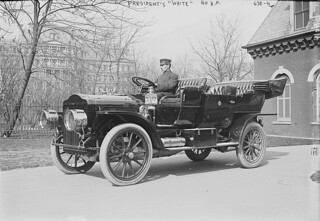 Woodrow Wilson was the first President to ride a car in an official state occasion, when he led a World War One victory parade in 1919 in a Cadillac convertible. In 1921, Warren G Harding, the first President who knew how to drive a car, rode in a Packard Double Six to his inauguration at the White House. His successor, Calvin Coolidge, was driven in a 1928 Cadillac Town Car.

Then an event happened which changed the nature of the Presidential limousine. In February 1933, President-elect Franklin D Roosevelt had just finished giving a speech from the back of an open car in Miami when an unemployed bricklayer named Giuseppe Zangara fired five shots at him. Roosevelt was not hit, but four bystanders were wounded, and Chicago Mayor Anton Cermak, who was traveling in the car with him, was killed. The Secret Service decided that they needed Presidential vehicles that were better protected. In 1938, the Secret Service obtained two heavily-built Cadillac convertibles outfitted with radios and weapons storage lockers–they were named the “Queen Mary” and the “Queen Elizabeth”. In 1939, the first specially-built Presidential limousine was delivered–known as the “Sunshine Special”. This was a 1939 Lincoln K-Series convertible V12 with extra-wide running boards and handholds for Secret Service agents. When Pearl Harbor was attacked in December 1941, the “Sunshine Special” was in the process of having armor plate and bulletproof windows added to it, and was not available. Instead, the Secret Service commandeered the bulletproof 1928 Cadillac Town Sedan that had belonged to gangster Al Capone, which had been confiscated by the IRS when Capone was arrested for tax evasion. FDR rode in Capone’s car to the Capitol Building to give his “day of infamy ” speech, and continued to use the “gangster car” until the Sunshine Special was returned. The Sunshine Special served as the official Presidential limousine for both FDR and President Harry Truman. 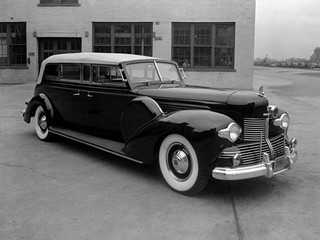 In 1950, two custom-built Lincoln Cosmopolitan convertibles were obtained by the Secret Service. During Eisenhower’s term, they were modified to add a glass “bubble top” to be used during motorcades. They also carried the names “Queen Mary” and “Queen Elizabeth”.

In 1961, President John F Kennedy received a 1960 Lincoln Continental Model 74 limousine. Known as the SS-100-X, the car was custom-built in Ohio. It was 33 inches longer than a standard Lincoln, had seats that could be raised for better visibility, and could be fitted with a clear plastic bubble top. One thing the car lacked, however, was air conditioning, and Kennedy disliked the bubble top because it made the car too hot. While riding in this car without the bubble top in Dallas, Texas, in November 1963, Kennedy was shot and killed. After the assassination, additional armor and a fixed hard roof was added to the car, and it was used by Lyndon Johnson until it was replaced by two 1965 Lincoln Continental Executive limousines. In 1969, President Richard Nixon received a new Lincoln Continental, with its hard top fitted with a sun roof, through which Nixon could wave to people during motorcades. In 1972, this was replaced by two different limousines–one a Lincoln Continental and the other a Chrysler Imperial LeBaron. The Lincoln went on to be used by Presidents Ford, Carter and Reagan. It was this limousine that Reagan was about to enter when he was shot by John Hinckley in March 1981. Ironically, Hinckley’s bullet had missed Reagan, but deflected off the armored door panel of the limousine and hit Reagan in the chest.

In 1983, this Lincoln was replaced by a modified Cadillac Fleetwood Brougham, which was used until President George HW Bush took office, when it was replaced with a 1989 Lincoln Town Car. In 1993, President Bill Clinton received a Cadillac Fleetwood Brougham that had been specially designed from the ground up. Now, in the interests of security, there were no more running boards or sunroof. Clinton’s Presidential limousine is now on display at the Clinton Library in Arkansas–it is the last Presidential car that will be released for public display. The Secret Service plans to test all newer Presidential limousines, for security purposes, to destruction.

In 2001, President George W Bush was provided with a Cadilac DeVille, which was replaced in 2005 with a Cadillac DTS Touring Sedan. This was itself replaced in 2009 when President Obama took office. Obama’s Presidential limousine is a special-built 2009 Cadillac, based on the DTS body, with a chassis and drive train from a GM truck. In the 2011 election, President Obama and Mitt Romney were provided with two specially-constructed armored and protected buses, known (when the President is aboard) as “Ground Force One”, that were built in Canada and modified in Tennessee. These buses will be given to both candidates during future Presidential elections. 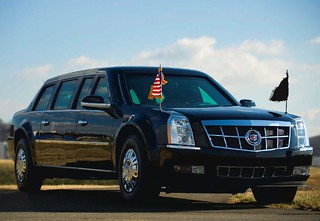 “The Beast” is, of course, heavily modified for Presidential use. It contains encrypted voice and data communications equipment allowing the President to keep contact with the rest of the government. For security, it is heavily armored against bullets and explosions, has special tires that can run even when flat, and is sealed against chemical and biological weapons (it carries its own air supply). The car even carries a stockpile of the President’s particular blood type.

It is actually inaccurate to call it “the” Presidential limousine–since 9-11 there have in fact been several (the exact number is classified), all identical copies of each other. For security reasons, there are now always at least two in a motorcade, so a potential attacker does not know which one actually contains the President.