One of the least-noticed and little-discussed environmental disasters has been taking place around the world over the past two decades, as turtle species have dwindled at an alarming rate. The problem all traces back to just one nation–and this time, it isn’t the US. . . . 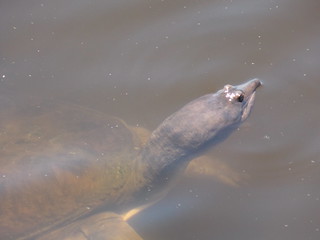 Turtles are highly prized in China and command high prices (a young Alligator Snapping Turtle from the US can sell in China’s black market for over $2,000). Because turtles can live for a long time without access to food or water, they are convenient to ship and store, and can be sold live in traditional marketplaces to guarantee their freshness–an important point in the Chinese food market. Turtle meat is the traditional dish for Chinese holiday get-togethers, much like turkey is in the US.  In traditional Chinese medicine, turtle flesh, shells, and bones are believed to confer longevity, sexual potency, and good health.

But turtles are particularly vulnerable to collection pressures on their populations. They are long-lived animals–lifespans of 50 or even 75 years are not uncommon–and many of them take at least 15 years to reach sexual maturity. Their eggs (which are also highly prized as a human food) are routine targets for predators. As a result, once turtle populations decline, it is very difficult for them to rebuild to their former levels. Turtles also play a key role in their ecosystems–as mid-level predators, they are the link in the food chain between smaller animals like fish and frogs, and larger predators like alligators and crocodiles, raccoons, jaguars, and large waterbirds like herons. Declines in turtle populations have a ripple effect on the rest of the ecosystem.

By the time China opened itself up to trade with the outside world in the 90’s, it had already wreaked havoc on all its native turtle species. Four species are known to have been driven extinct; another, the Giant Yangtze Softshell Turtle, is now the most endangered reptile in the world–only one male and one female are definitely known to exist, and wildlife conservationists are making desperate efforts to breed them to save the species. By 1996, with its own turtle populations depleted, China had begun importing turtles from neighboring Vietnam. Within just a few years those were virtually wiped out too, and the import trade relocated again, first to Burma, then to Java, then Borneo, then Sumatra. In each case, the area was virtually drained of its turtles before moving on to the next. By 2007, 67 of eastern Asia’s 90 turtle species were either threatened, endangered, or extinct, and 24 species had to be given legal protection under the Convention on the International Trade in Endangered Species (CITES).

Commercial turtle farms were set up in China, but they have so far failed to stem the tide: the farmers believe (wrongly) that wild-caught turtles breed better than captive-born, so turtles continued to be taken from their habitats as new breeding stock. Some turtle farm owners were serving as illegal laundering sites for species that had been illegally taken from the wild. And even the output from these farms (by 2007 two-thirds of all the turtles sold in China were farm-raised) was not enough to meet the almost infinite demand created by over one billion people. The soaring demand in China meant that prices for live turtles were five times higher in Beijing or Shanghai than they were anywhere else in Asia. And the lure of easy money meant disaster for turtles around the world. China began importing turtles from India and Taiwan (driving two Taiwanese species into “threatened” status) and then, in the early 2000’s, from the US.

Between 2002 and 2005, the US exported 31.8 million live turtles to China, nearly all of them destined for the cooking pot. About 31 million of these were Red-Eared Sliders that are farm-raised in the US (they are popular animals in the pet trade). But over 750,000 of these were native US turtles that had been taken from the wild, including species like Snapping Turtles, Softshell Turtles, Diamondback Terrapins, and Cooters. As wild populations began to decline noticeably (the number of Softshell Turtles collected in Florida alone quadrupled from 2000 to 2004, and Texas exported over 300,000 turtles), some states took action: Texas outlawed collection of turtles from public lands in 2007, the same year Maryland halted collection of the Diamondback Terrapin–and Florida banned commercial turtle collecting in 2009. In Virginia, where commercial collecting is still legal, the number of Snapping Turtles taken from the wild has tripled in the past several years, to over 100,000 pounds.

Things continue to improve for the turtles. In 2013, CITES adopted new regulations for 30 species of aquatic box turtles and 8 species of softshell turtles, and the percentage of the Chinese market supplied by domestic farm-raised turtles continues to increase. But the Chinese trade in wild-caught turtles–legal and illegal–still continues (in 2011, a boat loaded with a ton and a half of illegal Softshell Turtle meat from Florida was intercepted in Los Angeles as it was being shipped to China), and continues to be a threat to turtles around the world.

2 thoughts on “Turtles on the Brink”