Florida is the land of invasive species. Because of our status as a center for the importing of exotic pets and houseplants from overseas, and our neo-tropical climate, we have been invaded by everything from kudzu plants to Burmese pythons. If you are in Florida long enough, especially in spring or autumn, you’ll probably hear the whispered legend of the Love Bugs and how they are escapees from a mysterious genetic lab experiment. The truth alas is more mundane–the Love Bugs are just another of Florida’s invaders. 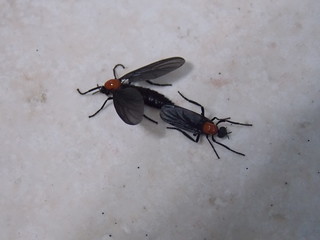 The Love Bug, scientific name Plecia nearctica, is a member of the Bibionidae family of flies, which are related to the mosquitoes, midges, and gnats. Some other common names for them include March Flies, Honeymoon Bugs, Double-Headed Bugs, and United Flies–but by far the most well-known name is “Love Bugs”. In appearance, they are small, less than half an inch in length, with the female a bit larger than the male. Like all flies, they have a single pair of wings. The body and wings are jet black, and the thorax, where the wings attach, is bright red. The red is a warning color–although they cannot bite or sting, the adults have acidic chemicals in their bodies that make most birds sick if they eat them (though a few species can tolerate the chemicals and happily snap them up).

For most of the time, Love Bugs are inoffensive critters that spend nearly their entire lives as a larva, happily munching on rotted plant material on the ground. The larvae take several months to reach sexual maturity, when they molt a final time, pupate, and emerge as a winged adult–then take to the air to find a mate.

In Florida, we get two crops of adult Love Bugs each year, once in May and again in September. (Down near Miami in warm years they may also get a third crop, in late December.) During these mating seasons, the Love Bugs emerge in swarms of thousands. The adults only live for a few days, and have just a short time to find a mate and breed before they die. And that leads to the plague, as constant swarms of Love Bugs, joined together abdomen to abdomen, fly around aimlessly in the throes of passion. The larger female drags the hapless male around through the air, backwards. Many of them will hook up, land, and lay eggs inside a plant stem for the next generation. Many more, however, will get splattered by cars, or get swatted when they fly into the faces and hair of annoyed humans. They land on beach-goers and get stuck in their suntan oil; they flop helplessly into your drink or your lunch if you eat outside. Swarms are often so thick that they can cover car windshields with smooshed slime, or even clog radiators and make the car overheat. And the acid in their blood has the added feature of eating the paint off your car. For about three weeks, the damn things are absolutely everywhere and fly into absolutely everything.

Until the 1950’s, there weren’t even any Love Bugs in Florida, and car paintjobs and uncovered Mai Tai’s were safe from the scourge. This sudden appearance has led to the widespread urban legend in Florida that the Love Bug is actually a man-made creation. In the early 1950’s, the story goes, researchers at the University of Florida in Gainesville were looking for a way to control Florida’s mosquito population, and hit upon the idea of producing something that would be sterile but would breed with the female mosquitoes, making them produce infertile eggs. By crossbreeding a species of fly with a mosquito (and perhaps by genetically engineering the resulting hybrid), the scientists, the story goes, produced the Love Bug. But, through some accident, the GMO bugs escaped into the wild, where, in the absence of natural predators, they reproduced wildly and went beyond control, giving us our present-day twice-yearly plague.

It’s a great story, but alas it is simply not true. Love Bugs are actually a quite normal species of fly which is native to Central America. Somehow or another, they made their way to New Orleans in the 1920’s (they may have stowed away on a boat, or they may have migrated naturally along the Gulf Coast of Mexico), and from there they spread out into Texas, Alabama, Mississippi, Georgia and Florida, reaching us in the 1950’s just as Florida’s human population was beginning to explode. The conditions in Florida seem to particularly suit them, and we seem to have the heaviest populations. Lucky us.