The American Congressional inquiry into the sinking of the Titanic, in April 1912, very nearly did not take place – and the reasons were legal and economic. 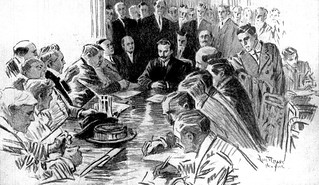 Newspaper illustration of J Bruce Ismay, owner of the White Star Line, testifying before the US Senate Committee.

When the world learned, on the morning of April 15, 1912, that the Titanic had struck an iceberg and sunk, Michigan Senator William Alden Smith paid particular attention to the press reports.  Senator Smith had previously met the Titanic’s captain, William J. Smith (no relation) on another vessel, during a trans-Atlantic trip in 1906.  By late afternoon, Senator Smith became more and more disturbed by the details he was seeing in the press reports – not enough lifeboats for all the passengers, the Titanic perhaps ignoring ice warnings, and traveling at excessive speed.  The White Star Line that owned the Titanic, Senator Smith knew, was itself a part of the International Mercantile Marine Company (IMM), an American holding company that was incorporated in New Jersey and financed by the American banker J. Pierpont Morgan.  In addition, the Titanic had been traveling to an American port, and most of its passengers were immigrants who were about to become American citizens.  Convinced that the US government had an interest in finding out exactly what had happened, Senator Smith telephoned the White House to ask what President William Howard Taft planned to do regarding the accident, and was told by Taft’s secretary that the President intended to let the British Board of Trade handle any investigation.

On April 17, however, after it became apparent that the only survivors had already been picked up by the British liner Carpathia, and that the loss of life on the Titanic had been heavy, Senator Smith introduced a resolution calling for an investigation into the accident by a subcommittee of the Senate’s Commerce Committee.  Smith was named Chairman, and six other Senators – three Republicans and three Democrats – were chosen to serve on the subcommittee.

The next day, the newly-formed panel received word that critically endangered their investigation even before it had begun.  The US Navy informed Senator Smith that it had intercepted a message to the White Star office in New York from someone aboard the Carpathia.  The cable read:

Most desirable Titanic crew aboard Carpathia should be returned home earliest moment possible. Suggest you hold Cedric, sailing her daylight Friday unless you see any reason contrary. Propose returning in her myself.
YAMSI

It didn’t take a Navy codebreaker to know that “YAMSI” was J. Bruce Ismay, the Chairman of IMM who had been on board the Titanic, and was now approaching the United States, with the rest of the survivors, aboard the Carpathia.  To Senator Smith, it looked suspiciously as if Ismay wanted to quickly spirit himself and all his employees back to England without even setting foot in America, thereby denying any reporters (or investigators) the opportunity to question any of the crew, and placing everyone out of reach of subpoenas for any potential American court hearing (Ismay didn’t yet know that the US Senate had already formed its own investigation of the disaster).

For anyone who was familiar with American maritime law, the reason for Ismay’s anxious desire to avoid any questioning by United States authorities was obvious, and it came down to one word: liability.

In the early days of trans-Atlantic travel, sailing between America and Europe was risky—the North Atlantic was stormy, unpredictable and dangerous.  In order to lessen the financial risk and to encourage trans-Atlantic shipping, the US adopted, in 1851, a doctrine of maritime law known as “limitation of liability”.  In effect, this provision removed most of the liability on the part of a ship-owner for any action over which it had no direct control, including the negligent actions of a ship’s captain or crew at sea. In such circumstances, the owner of the ship was limited in liability to only the value of any cargo lost.

There was, however, an exception to the limited liability doctrine—and it applied directly to theTitanic disaster.   The ship-owner’s liability was no longer limited if that owner had been in contact with the ship’s commander during a voyage and had in any way directed or controlled the actions undertaken by the ship’s captain while the ship was at sea.

Ismay, the President of IMM and the Chairman of the White Star Line which owned the Titanic, was not merely in wireless contact with the captain during the voyage, however—he was actually aboard the ship.  Ismay’s reputation was already in tatters, since it was widely believed by the American public that he had used his influence as the ship’s owner to obtain a seat in a lifeboat, and thus to save his own life at the expense of the passengers.  Ismay’s presence on the ship, however, as both he and Senator Smith realized, presented a far greater threat to him than merely a reputation as a coward.  If it could be shown that Ismay had exercised any influence over the actions of Titanic’s Captain Smith – in setting the ship’s course and speed in order to make a timely passage, for example—then IMM and White Star, as the Titanic’s owners, would no longer be protected by the “limited liability” doctrine, and could be sued in American courts by all of the 700 survivors and all 1,500 victims’ next of kin.  Ismay, White Star and IMM all faced potential bankruptcy if a US court denied them the limited liability protection.

For Senator Smith, the news that Ismay wanted to leave the US immediately (and take his British crew with him) raised suspicions that, between the lack of lifeboats and the potential for full liability, the owners of the Titanic had something to hide.  By noon that day, Smith was at the White House asking the Attorney General whether the US had the legal right to subpoena Ismay and the Titanic crew, who were all British citizens.  Upon being informed that the Englishmen could be legally served with a subpoena as long as they were in the US, Smith met with the rest of the Senate subcommittee and, accompanied by Senator Francis Newlands, boarded a train for New York.  Immediately upon arrival, the two Senators served a total of 20 subpoenas upon Ismay and the Titanic officers and crew, requiring them to appear at hearings that were hastily scheduled for the next morning, April 19, at the New York Waldorf-Astoria. Ismay was the first witness to be called. In all, the committee heard from 80 witnesses over a period of almost three weeks.

In the end, the Committee concluded that, although Ismay’s presence on board the ship may have influenced Smith’s decisions, Ismay had not actually issued any orders regarding theTitanic’s normal operations. The limitation of liability remained in effect, and the Titanic’s owners were not liable for damages in American courts.

One thought on “Titanic: How the US Investigation into the Sinking Almost Didn’t Happen”