In May 1776, the Second Continental Congress assembled in the Pennsylvania State House, in Philadelphia, to decide upon the political future of the North American English Colonies. On June 7, delegate Richard Henry Lee of Virginia introduced a resolution which cut to the heart of the matter: “Resolved: That these United Colonies are, and of right ought to be, free and independent States, that they are absolved from all allegiance to the British Crown, and that all political connection between them and the State of Great Britain is, and ought to be, totally dissolved.” 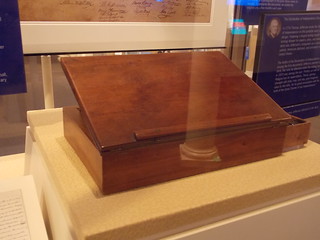 The portable desk that Jefferson used to write the Declaration of Independence. On display at the Smithsonian Museum of American History

On June 11, after several days of sometimes acrimonious debate, the Continental Congress decided to call a recess for three weeks before voting on Lee’s resolution (to give the delegates time to contact their home states and ask for instructions). But before adjourning, they appointed a five-man committee consisting of Benjamin Franklin, John Adams, Robert Livingston, Roger Sherman, and Thomas Jefferson, to draft a formal presentation of the reasons for independence, to be ready when the delegates returned for the vote. Jefferson, at age 33, was the youngest member of the Continental Congress. Although he was an uncomfortable public speaker, he was well-known as a powerful writer, and the Committee of Five in turn appointed him to write the first draft of the declaration. He began drafting the document, working alone in his room at Market and Seventh Streets, using a small wooden writing desk that he had designed himself.

In his draft, Jefferson drew heavily upon the Declaration of Rights that had been written by George Mason and adopted by the Virginia Assembly. Mason’s phrase “all men are born equally free and independent” became, in Jefferson’s draft, “all men are created equal”; Mason’s listing of “natural Rights” as “Enjoyment of Life and Liberty, with the Means of acquiring and possessing Property, and pursuing and obtaining Happiness and Safety,” became Jefferson’s, “inalienable rights” of “Life, Liberty, and the Pursuit of Happiness.” Surviving pieces of Jefferson’s draft pages show that he wrote several different drafts and made many crossed-out changes to his text.

After two weeks, Jefferson showed his final draft version to Franklin and Adams, who suggested a few changes and submitted it to the Continental Congress. On July 1, the Continental Congress reconvened, and on July 2, 1776, 12 of the state delegates voted to accept Lee’s resolution for independence (New York did not vote–it had not yet received instructions from its assembly). Jefferson’s draft Declaration of Independence was then presented to the Congress.

Over the next two days, the delegates made over 80 changes to the text in Jefferson’s draft, shortening it by about 25%. One of the changes was to add the words of Lee’s resolution (“These United Colonies are, and of right ought to be, free and independent States”). In deference to the delegates from the southern states, a section of Jefferson’s draft condemning the King of England for allowing slavery in the colonies was dropped. After all these changes, the delegates voted on July 4, 1776, to adopt the Declaration.

But this was not the written copy of the Declaration of Independence that was signed–in fact the Declaration of Independence was not signed at all on July 4. Instead, after the vote, the Committee of Five was directed to have copies of the document printed and distributed to the various colonial Assemblies, Committees of Correspondence, and Continental Army commanders. Some 200 copies of the Declaration were made by Philadelphia printer John Dunlap–today only 26 of these survive. One copy was delivered by horse to Easton, Pennsylvania, where it was read in the Circle at the center of town on the morning of July 8, the first public reading. Later that same afternoon it was read in Philadelphia (legend has it that the Liberty Bell was rung to call the citizens of the city to hear the document, but in reality the bell tower was in disrepair and the bell was probably not rung that day). The next day, the Declaration was read in New York City, provoking an enthusiastic crowd to pull down a nearby statue of King George III.

On July 9, the New York state assembly finally sent in its official vote to accept the Lee resolution for independence, and ten days later Congress ordered that a formal copy of the Declaration of Independence be written. This appears to have been done by Timothy Matlack, an assistant to the Continental Congress Secretary Charles Thomson. Matlack copied out the final draft of the Declaration in large print onto parchment. On August 2, 1776, the formal handwritten document was ready for signing. The first to sign was John Hancock, the President of the Continental Congress–according to legend, he made his signature extra large, saying “Now John Bull can read this without his spectacles”. It is this copy, not the draft written by Jefferson, that resides today in the rotunda of the National Archives.

In all, fifty-one delegates of the Continental Congress signed the Declaration on August 2, 1776. Five delegates were absent, and signed later. Two delegates–John Dickinson and Robert Livingston (who was one of the Committee of Five that had drafted the document)–refused to sign, saying that it was premature to break off relations with London and they hoped yet for a reconciliation. One of the signers, Robert Stockton of New Jersey, was arrested later in 1776 by the British and, after months in jail, recanted his signature and declared allegiance to England.

Nine of the signers subsequently died before England formally recognized the independence of the United States in 1783. Jefferson and Adams, the members of the Committee of Five who had drafted the Declaration, both died on the same day, July 4, 1826–the 50th anniversary of the document’s approval by Congress. The last remaining signer, Charles Carroll, died in 1832 at the age of 95.