It was one of the most momentous events in the history of life–about 375 million years ago, a freshwater fish, probably related to today’s lungfish, flopped out of the water onto dry land, gulped air, ate insects, and began the long pathway towards the evolution of land-dwelling amphibians, reptiles, birds, mammals and, ultimately, us. 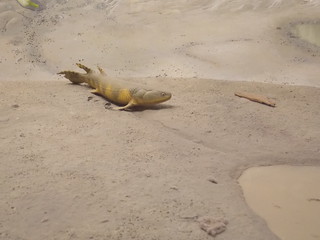 Among the unique characteristics which appeared in the Rhipidistian fishes were a skull bone pattern which closely matches that of the earliest-known amphibians. In the Rhipidistian fishOsteolepis, there are two bones at the roof of the skull which correspond to the parietal bones in terrestrial vertebrates, and between them is an opening for the pineal gland or “third eye”, which in terrestrial animals serves as a light indicator to calibrate the internal clock.

The Rhipidistians are also characterized by two moveable joints extending across the skull, one in the roof of the mouth and another at the base of the braincase. These joints allowed the fish to increase its gape and swallow large objects.

By far the most important feature of the Rhipidistians, however, was their lobed fins, which consisted of two pairs of fleshy projections with a rayed fin at the ends. Each lobe contained a number of bones and muscles which allowed the fin to be moved, and which allowed the fish to propell itself along the river bottom (somewhat similar to the modern “walking catfish”). The Rhipidistian lobe fin was most highly developed in the later species, including Eusthenopteron. Eusthenopteron differed from most other Rhipidistians in having a number of bony projections from its vertebral bones, which gave increased protection to the spinal cord.

In the upper Devonian period, some 375 million years ago, the earliest known terrestrial vertebrates appeared. Several different early amphibians are known from the fossil record, including Tiktaalik and Acanthostega. One of the best-studied of these was called Ichthyostega. Ichthyostega had well-developed limbs with five toes, just as all existing land vertebrates (other early amphibians like Tiktaalik had a larger number of toes). The Ichthyostega limbs had a skeletal structure consisting of a single large upper bone (called the humerus in the front limbs and the femur in the rear) and two long bones in the lower limb (called the radius and ulna in the front limbs, and the tibia and fibula in the rear limbs). The digits and “wrists” are made up of a large number of smaller bones. This pattern is also found in every other existing terrestrial animal. The fleshy lobe fins of the Rhipidistian fishes have an identical bone structure, which corresponds one to one with the limb skeletons of Ichthyostega and other terrestrial vertebrates.

Another characteristic of the Rhipidistian skull was the arrangement of the nostrils. In all amphibians, the internal nostrils are separated from the external openings in the skull by a wide bar of bone. In Ichthyostega, the internal nares are very close to the external nostrils, and are separated by only a thin bone, as they are in the Rhipidistians. Ichthyostega also had a small rostrolateral bone between the nostrils, which is found in the Rhipidistian fishes but not in any other amphibian skull.

The vertebral bones of Ichthyostega were also nearly identical with those of the Rhipidistian fishes. Although each vertebral bone possessed a bony projection or “process”, the vertebra were loose and were not tightly connected to each other as they are in all other terrestrial animals. Since terrestrial animals need a strong solid backbone in order to support the weight of the body against gravity, this suggests that, despite the five-fingered limbs, Ichthyostega had still not become efficient at terrestrial locomotion and probably spent most of its time in the water (as would be expected from a fish-amphibian transition), using its limbs to push itself around on the river bottom. This is confirmed by the presence in the Ichthyostega skeleton of canals for the lateral line organ used by fish to sense vibrations in the water.

Ichthyostega and its later descendents belonged to a group of amphibians known as Labrynthodonts, or “labrynth-tooth”, a name which comes from the characteristic in-folding of the dental covering, which forms a complicated maze-like pattern. This unique trait is shared by only two group of animals–the Labrynthodont amphibians and the Crossopterygian fishes.

Thus, the Ichthyostega fossils demonstrate clearly an animal that had a number of traits which were unique to two entirely separate groups of animals. The amphibian-like traits ofIchthyostega–the pentadactyl limbs and the pelvic and pectoral girdles–mark Ichthyostega as one of the earliest known vertebrates capable of walking on land, while the fish-like traits–the scales, the preopercular bones, the bony rayed fins, the arrangement of the nostrils, and the loosely-connected vertebral column–mark it as very primitive and fishlike, with a curious blend of transitional features between fishes and amphibians.

So why did these early lobe-finned fishes leave the water and take up a life on land?  We don’t know for sure, but there are several possibilities. Plants had already established themselves on land by this time, and they were followed by insects who used the new land plants as food sources–and by other predatory arthropods (like scorpions and centipedes) who used the insects as food sources. So the lobe-finned fishes had a huge readily-exploitable food source available to them, if they were able to go on land to reach it. Another likely hypothesis is that the lobe-finned fishes lived in small streams and ponds that were susceptible to drying up in warm weather, and they developed the ability to walk on land so they could leave their shrinking waterholes and move overland to find new ones–eventually staying on land fulltime.