For most of its history, Florida was a string of islands surrounded by a shallow tropical sea. But at one point it was the complete opposite–when the global climate was drier and sea levels were very much lower, Florida was part of a vast desert that stretched all the way across the southern US. Today, the deserts of the Southwest are the remaining fragments of this former climate, but traces of its desert past can still be found in Florida, in our remnant populations of rattlesnakes, burrowing owls, tortoises, and cactus. 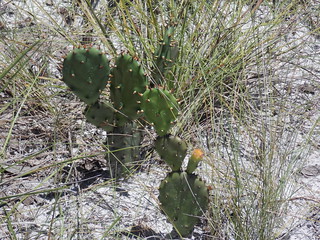 There are about 200 species of Prickly-Pear Cactus, in the genus Opuntia. All of them are native to the western hemisphere, but many have now become established worldwide. They are very common in southern Europe and the Middle East. In Australia and South Africa, they are a serious invasive pest.

The Opuntias are characterized by their flat oval pads, which give them the name “Paddle Cactus”. The pads are covered with clusters of large stiff spines, and also with a layer of smaller more delicate spines that break off easily and embed themselves in the skin of anyone touching them. The yellow flowers, several on the margins of each pad, can be large and showy. The “pears” are the fruiting bodies formed by the cactus–they may be red, orange or yellow in color. The fruits and the young pads are edible, and are marketed in the US under the names “cactus fruit”, “prickly pears” or “cactus figs”, and the Spanish names  “tuna” and “nopales“.

The Prickly Pears typically grow in low thick entangled masses. In many areas they are deliberately planted as fences and hedgerows. (Some Florida homeowners plant patches of cactus under their windows to deter intruders, known as “burglar bushes”.) Each plant is made up of a series of pad segments, with new pads growing off the edges of the old ones. As the pads touch the ground they form new roots, and often break off to form new plants. MostOpuntia cannot tolerate shade and only grow in open areas with full sun. Like most cactus, they store water inside their pads, which are filled with a thick mucilaginous goo.

Although the Prickly-Pears originally evolved in the dry desert regions of northern Mexico and the American Southwest, they are remarkably adaptable, and have now spread to virtually every open dry sunny area in North America, including sand dunes, scrub areas, and semi-arid plains. Different species have become adapted to available elevations, rainfall levels, and temperatures–cold-tolerant versions can be found as far north as Canada. Most species easily hybridize with each other.

In Florida, about nine species of Prickly-Pear can be found, but the most common is Opuntia humifusa, known as the “Eastern Prickly-Pear”or the “Devil’s-Tongue”. This is an adaptable species that can be found, in scattered suitable habitat, as far north as Massachusetts and as far west as Montana. In Florida, its preferred habitat is open areas of pineland scrub forest or palmetto thickets, along sandhills, and on the inland side of coastal sand dunes, but it is very widely planted as an ornamental, and can now be found virtually anywhere. Prickly-Pears are often one of the first plants to appear in areas that have been cleared by wildfires.

Patches of Prickly-Pear Cactus provide a well-protected shelter for many small Florida animals. Ground-nesting birds often find protection here, and snakes and small mammals also hide under the spiny pads. Many birds eat the cactus fruits, as do coyotes, foxes and rabbits, and browsers such as deer, gopher tortoises and raccoons also eat the young pads.