Florida is the land of invasive species. Because of our status as a center for the importing of exotic pets and houseplants from overseas, and our neo-tropical climate, we have been invaded by everything from kudzu plants to green iguanas. And the grand-daddy of them all, the most famous and best-known of all Florida’s invasives, is the Burmese Python. 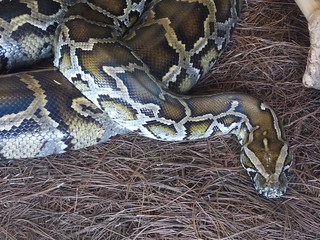 The Burmese Python (Python bivittatus) is a large constrictor snake found in the rainforests of southeast Asia, usually near water. Some authorities consider it a geographical subspecies of the very similar Indian Python (Python molurus). At measured lengths near 20 feet, it is the third-largest snake in the world–only the Reticulated Python and the Green Anaconda are larger. The largest known Burmese Python was a resident of the Serpent Safari reptile park in Illinois–“Baby” measured 18 feet 10 inches long and was, sadly, grossly obese, weighing 403 pounds. A typical Burmese Python adult will measure around 14 feet and weigh around 90 pounds (the females are larger than the males). Males can be recognized by the pair of clawlike breeding spurs located on either side of their vent–all that remains of their hind legs.

Like all pythons, Burmese are egg-layers. The females lay clutches of 20-30 oblong eggs, with soft leathery shells. Unlike most snakes, however, which simply lay their eggs and forget them, the pythons provide maternal care– the female curls her body around the clutch and uses muscular contractions to raise her body temperature above that of the surrounding air, incubating the eggs. The youngsters are about two feet long when they emerge, ready to wander off and live on their own. Under good conditions, they can reach eight feet in length by their first birthday, and reach their adult size of 12-14 feet in 2-3 years. Like all reptiles, they never stop growing, though their growth rate gets slower and slower with age. Burmese pythons can live 25-30 years.

Pythons are ambush predators, lying in wait along watercourses and jungle paths for prey to wander within reach. They have no venom, but kill their prey through constriction, seizing the prey with their recurved teeth and wrapping their body coils around it. Contrary to popular belief, they do not crush their prey to death and do not break any bones; instead, they exert a steady pressure that prevents the prey’s chest cavity from expanding, preventing it from inhaling and thereby suffocating it.

Despite their huge size, Burmese pythons were readily available in the pet trade throughout the 1990’s and 2000’s–every pet shop that specialized in reptiles was likely to have a number of hatchling Burmese Pythons for sale. Their bright color patterns and their generally docile dispositions made them popular pets, and they were captive-bred in a variety of different color patterns and strains, including albino.

Although Burmese Pythons are generally docile and tame very readily when young, they still present dangers and difficulties to their keepers. The most dangerous time is feeding. Snakes hunt by scent, not by sight, and it’s not unusual for snakes to catch the scent of a food item, see the keeper moving around, and confuse the two, striking at the keeper instead. There have been several instances in the US where large pythons mistakenly constricted and killed their keeper thinking it was a prey item–by the time the snake realized its mistake it was already too late for the keeper. It is also quite a workout just moving a large Burmese for cage-cleaning and other routine tasks. Once the snake reaches a length of 7-8 feet, it can be quite difficult for a single person to handle, particularly if that particular snake happens to be a “runner” who won’t sit still. Not coincidentally, it is often right around that time that the often-inexperienced python-keeper begins to realize that perhaps keeping this species as a pet wasn’t such a great idea after all.

Back in the late 90’s and early 2000’s, I did reptile rescue work in Florida, taking in unwanted pets, rehabilitating them, and adopting them out to new homes. Most of the calls I got were for just three species–Red-Eared Slider turtles, Green Iguanas, and Burmese Pythons. I had several dozen adult snakes pass through my hands over the years. Alas, though, there were far more unwanted pythons than there were rescuers to take them or new homes to put them in. As a result, many many keepers, once they got tired of their pet, simply dumped them in a field somewhere. And there began Florida’s most well-known invasive-species problem . . .

The earliest-recorded wild python in Florida was found in the Everglades in 1979. At that time, Burmese pythons were imported mostly for zoos, and it is likely that this one was an escapee from a shipment entering the US at Miami. In the 1980’s and 1990’s, however, the exotic pet trade in the US expanded enormously, and numerous species of reptiles were imported in enormous numbers, including Burmese Pythons. Released pets and escapees began showing up around virtually every Florida urban area from Tallahassee to Key West, and TV news stories regularly featured large snakes that were found in city parks or residential backyards. In areas north of Naples, the pythons were unable to survive the winter and were not able to breed in the wild. But in southern Florida, particularly in the Everglades, the conditions suited the snakes perfectly. The final blow came in 1992, when Hurricane Andrew destroyed a commercial python-breeding facility in the area, releasing dozens of captive Burmese Pythons. By 2001, the species had established a self-sustaining breeding population in the Everglades.

In desperation, the state outlawed the importation or sale of pythons and instituted a “permit” system for those already in captivity (including requirements for all snakes to be radio-chipped for identification and for keepers to submit to regular housing inspections). The Federal government banned interstate sale of Burmese pythons. But it was already too late. By 2005, an estimated 5,000 pythons were living in the Everglades; current estimates range as high as 150,000 individuals. The pythons are nocturnal hunters, and will eat virtually any mammal or bird they can catch–and will also prey on the occasional Alligator. They have already reduced the populations of the park’s already-endangered varieties of waterbirds.

As a result, since 2005 the state has been waging an all-out war on the pythons. The Florida Fish and Wildlife Conservation Commission has a “kill on sight” policy for wild Burms, and sponsors regular “contests” for snake hunters, with prizes awarded for the most snakes killed. However, the snakes are well-camouflaged, spend much of their time in the water, and are very hard to find. Fewer than a thousand pythons are killed each year–a drop in the bucket compared to the tens of thousands that are probably living and breeding in the wild. It is almost certain that the species is now firmly established and is simply impossible to eradicate.