Salt Marsh Snakes are unique animals. Close relatives of the water snakes, they are the only Florida species that are adapted to live in salt water, but they are also arboreal, spending much of their time in mangrove trees along the seashore. And, sadly, they are under intense danger, partly from loss of habitat and partly because of their close genetic relation to the more common water snakes. 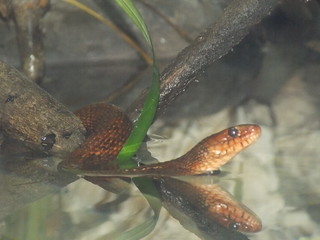 All three subspecies are found in mangrove swamps and salt-grass mudflats along the seashore.  The Atlantic and Gulf subspecies are gray-colored with darker stripes or bands (the stripes are mostly longitudinal, which is unusual among water snakes). The Mangrove subspecies is found in two distinct color patterns, both of which can be found in any particular litter–one color phase is grayish with darker splotches and bands, similar to the other subspecies, while the other color phase is a solid reddish-orange. The gray splotched/striped patterns help the snakes hide in the leaf litter under the mangrove trees, while the orange color phase found within the Mangrove subspecies is well-camouflaged while resting on the mangrove branches or prop roots.

Despite their marine habitats, though, none of these snakes have any biological adaptations for a life in saltwater. Sea snakes, which are not found in Florida, spend their whole lives in the open ocean and only rarely venture out onto shore, and have flat finlike tails which help them swim and catch fish. More importantly, sea snakes have a large organ in their bodies that excretes salt, allowing them to drink seawater. The salt-marsh snakes do not have any of these biological adaptations, however–instead, they use behavioral means to survive in their environment. Not being able to drink seawater, they must drink opportunistically from temporary freshwater puddles formed in the sand by rainstorms. Since they have difficulty swimming fast enough to catch fish in the open surf, they prefer to hunt in small shallow pools left behind by the retreating tide, where they can find trapped fish. The salt-marsh snakes seem to have parted company with the other Nerodia species only very recently in evolutionary terms, entering an ecological niche left empty by the lack of sea snakes, but not yet having enough time to have developed appropriate biological adaptations. And in fact a DNA comparison shows them to be very similar, genetically, to the more common Florida water snake  Nerodia fasciatus and its various subspecies. Indeed, some taxonomists have argued that the salt-marsh snakes are in fact just subspecies of the Nerodia fasciatus species (and to further confuse the matter, other taxonomists have concluded that the Nerodia fasciatus complex is itself a subspecies of the water snake Nerodia sipedon).

And therein lies the problem. Over the decades, as the human population of Florida expanded and seashore areas were developed and mangrove habitats destroyed, the shrinking populations of salt-marsh snakes were forced into more and more contact with the more common water snakes, and began to interbreed. As a result, the salt marsh species have been genetically swamped by the much more common water snakes, and are steadily losing their distinctiveness. The genetic interbreeding combined with habitat loss have taken all three subspecies to the brink of extinction, and all three are legally protected by the state of Florida; the Atlantic Salt Marsh Snake, the one with the smallest natural range, is also federally protected.

Despite their genetic closeness, however, the salt-marsh snakes are very different, behaviorally, from the water snakes, and not just because of their affinity for saltwater habitats. Water snakes are nervous and defensive animals who bite freely if handled and like to spray foul-smelling musk all over their handlers. The salt-marsh snakes I’ve seen in the wild, however, have all been calm and mostly docile, and didn’t seem to object to brief handling for a close examination (which is technically illegal, so you may not want to try it). This difference in behavior may be related to the relative lack of mammalian predators in the seashore environment–the primary predator of salt marsh snakes probably being large shorebirds. Water snakes are also nearly entirely terrestrial–though they can sometimes be found sunning themselves on lower tree branches, they prefer to stay firmly on the ground, retreating into the water when disturbed. Salt marsh snakes, however, particularly the Mangrove subspecies, are semi-arboreal, and are often found in the branches or prop roots of mangrove trees–and when disturbed they are just as likely to climb further up the tree. Again, this may be a response to predation by large shorebirds who hunt in the sand.

None of the salt-marsh snakes is very large–the Mangrove and Gulf subspecies average 2-3 feet, and the Atlantic subspecies is a bit smaller. Like all water snakes they are live-bearers, giving birth in early spring to a litter of 15-20 youngsters about eight inches long. The youngsters are eagerly snapped up by gulls and other predators, and the death rate is high.

Sadly, the salt-marsh snakes have been little-studied, and there are large gaps in our knowledge of their biology. As they become more and more threatened, biologists are making an effort today to study them in the wild and determine how best to protect them and preserve their unique lifestyles.