Built in 1776 as part of the first fleet authorized by the fledgling American Continental Congress, commanded by a General who later turned traitor, and sunk in her very first battle, the gunboat “Philadelphia” nevertheless played a crucial role in the success of the American Revolution. 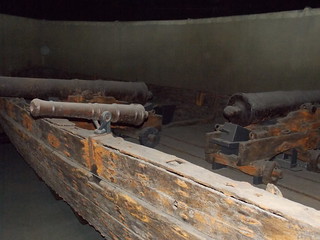 The “Philadelphia” on display at the Smithsonian Museum of American History.

In 1775, the American Revolution had just begun with the battles at Lexington and Concorde. One of the biggest potential dangers to the American rebels were the British forces in Canada, which could sweep down, cut off the cities of Boston and Philadelphia from the rest of the colonies, and crush the rebellion.  To prevent this, the Continental Congress decided on a daring and bold move–American forces would invade Canada and engage the British forces there, preventing them from entering the colonies. The invasion failed, however, when the colonial forces were beaten at the Battle of Quebec, and were forced to withdraw back to Ft Ticonderoga, on Lake Champlain in New York.

Now, it was the British who saw their chance, and they poured troops across the border, led by General Guy Carleton. Since Lake Champlain was the major transportation route in the area, both sides realized that whoever controlled the lake would control the colony of New York, and in early 1776 both sides began building a fleet of gunships on Lake Champlain–the Americans at one end of the lake and the British at the other. American General Horatio Gates placed General Benedict Arnold in charge of building the fleet.  Arnold, who had been wounded in the Battle of Quebec, had once been a  ship’s captain and therefore had some naval experience. The American fleet, built in just 15 weeks, consisted of 15 ships, including several sloops and schooners, and 8 gunships. One of these was christened “Philadelphia”.

The “Philadelphia” and her sister gunships were 53 feet long, 15 feet wide, and had a crew of 44 sailors. Designed for lake conditions, the boats were flat-bottomed with a single mast and a bank of rowing oars. The desperate Americans used whatever guns they could find, and the “Philadelphia” was armed with a 12-pounder cannon at the bow, two 9-pounders on the sides that were almost 100 years old, having been made in Sweden in the late 1600’s, and eight swivel guns mounted to the gunwales. She was originally designed to have a heavy “mortar” cannon at the rear, but the mortar exploded during testing. The rear of the “Philadelphia” then had to be heavily ballasted to counter the weight of the bow cannon.

On October 11, 1776, the two fleets met off Valcour Island and fought for control of Lake Champlain. The American fleet was commanded by General Arnold, and the “Philadelphia’s” commander was Captain Benjamin Rue. The British had built a much larger fleet–25 ships to the American’s 15. Just before sunset, the “Philadelphia” was struck by a British cannonball that punctured her side and broke several of her support timbers. She quickly sank. Over the next two days, the British fleet hunted down and destroyed virtually the entire American fleet.

Although the British had won control of Lake Champlain, however, it was too late in the year for the Army to begin a land campaign in New York. As a result, the British entered their winter camps. By the time British forces under General John Burgoyne were able to launch their campaign against New York in the spring of 1777, the American Continental Congress had been able to raise and train enough volunteers to strengthen its own army, and when the Continental Army under General Gates took on Burgoyne’s British forces at Saratoga in October 1777, the Americans won a crushing victory, forcing Burgoyne’s surrender. Saratoga was a turning point in the American Revolution–it prompted France to enter the war on the side of the colonials–and it had been made possible because of the delay forced onto the British Army by the “Philadelphia” and the rest of the fleet at Lake Champlain.

General Benedict Arnold, who commanded the first American Navy fleet at Lake Champlain, went on to be wounded at Saratoga (many credit him with winning the battle) and was lauded as one of the most capable American Generals. However, after being passed over for a promotion, Arnold became embittered and defected to the British Army–and became America’s most infamous traitor.

The “Philadelphia”, meanwhile, sat upright on the bottom of Lake Champlain and was preserved by the cold oxygen-less water. Her wreck was found in 1935 by diver and salvage expert Colonel Lorenzo Hagglund. Hagglund recovered hundreds of artifacts from the wreck, including dishes and utensils, buttons, buckles, preserved leather shoes, 55 cannonballs, and human bones. He then lifted the entire wooden remains of the ship, with the 24-pound British cannonball that sunk her still embedded in the planking. A number of other sunken American ships have been identified at the site of the battle, including the gunship “Spitfire” and the schooner “Royal Savage”.

In 1991, a team of researchers launched an exact replica of the gunboat, which they christened “Philadelphia II”. The replica is now on display at the Lake Champlain Maritime Museum.