Think electric cars began with the Volt and the Prius?  Think again—electric cars have been with us from the very beginning . . . 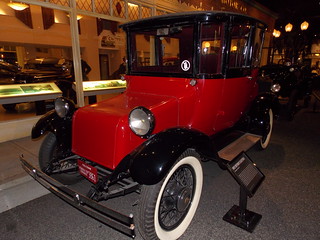 The very first “horseless carriage”, or wheeled vehicle that moved under its own power, was made in 1769 for the French Army by Nicolas-Joseph Cugnot; it used a steam engine, had three wheels, and moved at 2.5 mph. In 1832, Scotsman Robert Anderson made a carriage that ran on an electric motor, and was powered by a bank of dry-cell batteries that could not be recharged. The first “true” automobiles, four-wheeled with gasoline-fueled internal combustion engines, were made in Germany; Karl Friedrich Benz produced his first model in 1885, followed by Gottlieb Wilhelm Daimler in 1886.

The earliest electric cars were hampered by the primitive battery technology of the time. It wasn’t until 1859, a French physicist named Gaston Plante developed the first rechargeable electric battery, a “wet cell” that used lead immersed in acid. Plante’s invention was further refined in 1881 by Camille Faure, and resulted in what is essentially the same lead-acid battery used today.

Subsequently, in 1884, the first really workable electric automobile was built by English industrialist Thomas Parker, who used high-capacity lead-acid batteries that he designed and produced himself. Parker had previously been in charge of introducing electric-driven trains to the London subway system. In the United States, the first practical electric car was introduced in 1891, by Scottish immigrant William Morrison, of Des Moines, Iowa. Morrison’s vehicle used a bank of 24 rechargeable lead-acid batteries, could carry six people, and could move at 15 mph. It needed to be recharged every 50 miles.

By 1897, automobiles were appearing in every American city, and many of these were electric-powered–electric cars were outselling both steam and gasoline cars. The Baker Motor Vehicle Company introduced an electric car that could go over 100 miles on a charge. New York City introduced a fleet of electric taxis built by the Electric Carriage and Wagon Company of Philadelphia; London’s electric taxis, introduced the same year, were made by Walter C Bersey–they were nicknamed “Hummingbirds”. By 1900, almost 40% of all the automobiles in the US were electric-powered. Although the motor technology limited electric cars to about 20 mph, they were quiet (gasoline engines had no mufflers yet), produced no vibration, and were virtually maintenance-free. And they could be started up with the push of a button, unlike gasoline engines, which at that time had hand-cranked mechanical starters.

Because of their sometimes limited range between charges, though, electric cars were most popular in cities, particularly among upper-class women. Many models of electric car came with luxuriously-styled interiors to appeal to the upper-class. To combat the problem of limited facilities for recharging (many homes in 1900 were still not wired for electricity), the General Vehicle Company (GVC), a subsidiary of the General Electric Corporation, introduced “exchangeable batteries”, in which customers could bring in their batteries and exchange them for fully-charged ones.

It looked as if electric cars and the companies that produced them (such as the Baker Motor Vehicle Company, the Columbia Company, and the Electric Vehicle Company) would dominate the market. Then in 1908, Henry Ford introduced the gasoline-powered Model T.

It was not its gasoline engine that allowed the Model T Ford to swiftly conquer the automobile market–it was its price. Built at large scale in assembly-line factories, the Model T was far cheaper than anything else available, whether steam, gasoline or electric. In 1912, Charles Kettering sealed the gasoline-powered automobile’s position of dominance by producing a workable electric starter, which eliminated the need for hand-cranking. Now, the internal-combustion engine could also be started with the push of a button, and with gasoline fuel now plentiful and Henry Ford turning out cheap Model Ts by the hundreds, the electric car (and the steam car) soon virtually disappeared. The last gasp came in 1911, when the Woods Motor Vehicle Company of Chicago briefly produced the first gasoline-electric hybrid–its slow speed and mechanical complexity, however, made it unpopular.

By 1912, a typical electric car cost almost twice as much as a mass-produced gasoline Model T. The rapidly-expanding inter-city road system also began to place a premium on cars that could go long distances quickly, and electric cars were still technologically limited in their speed and range.

By 1920, the electric car was dead and forgotten. It did not reappear with any popularity until almost 100 years later.

2 thoughts on “The First Electric Cars”