By 1890, the US was expanding rapidly. The West had been conquered, thriving large cities existed along both coasts, and populations were moving in large numbers. The primary method of transportation was the railroad, and new tracks criss-crossed the country. But even at top speed, it took almost a week to travel from coast to coast. The locomotive “Empire State Express No. 999” changed that. 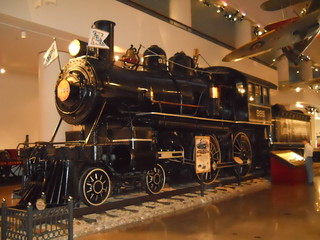 Empire State Express No. 999, on display at the Chicago Museum of Science and Industry.

By 1890, New York and Chicago had established themselves as the two largest cities in the US. Two major railroad companies fought with each other over the lucrative travel routes between the cities: the Pennsylvania Railroad, and the New York Central & Hudson Railroad. After a series of price wars, the two lines turned to another factor to try to sway riders to their own trains–speed. This competition heated up when it was announced that the World’s Fair would be held in Chicago in 1893–both companies wanted to capture the flood of East Coast passengers that would be going to Chicago for the fair. In 1891, Pennsylvania Railroad opened a “Pennsylvania Limited” express service to Chicago, with its most modern and fastest locomotives. In response, the New York Central opened its “Empire State Express” route, and began work on a new locomotive, one that was designed to reach 100 mph–almost double the speed of a typical locomotive. It was to be called “No. 999”.

The locomotive was designed by William Buchanan of the company’s West Albany Machine Shops. Measuring just 37 feet long (small for a locomotive), it was designed from the track up for maximum speed. The steam engine was a new cutting-edge design. The wheels were in the configuration known as “4-4-0”, with four unpowered leading wheels (two on each side), four powered wheels (two on each side) and zero trailing wheels. The powered wheels were 86 inches in diameter rather than the 70-inch standard, to give it more power. The entire locomotive was assembled by hand.

On May 9, just a short time before the World’s Fair was set to open, No. 999 made her first run with the Empire State Express, leaving from Rochester with engineer Charlie Hogan at the controls. After some brief boiler problems, the new locomotive ran the 69 miles from Rochester to Buffalo in just 68 minutes, and at one point reached a calculated speed of 102 mph–unbelievable for the time. By the next morning, the press had dubbed No. 999 “The Queen of Speed”, and large crowds turned out along the tracks to see her make the return run back to Rochester. Later on the afternoon of May 10, the Empire State Express again set out for Buffalo, this time with a number of newspaper reporters and some officials from the railroad company aboard. Hogan gave the locomotive full steam, and using stopwatches and mile markers, the reporters and railroad officials calculated her highest speed, reached near Crittendon in Erie County, at 112.5 mph.

Then and now, there has been skepticism about these figures. The train had been equipped with a speed recorder, and its highest reported speed was 86 mph–but the recorder had not been in use through the entire trip.

In any case, railroad officials and the press accepted the speed recorded by the reporters, and “The Queen of Speed” became a national sensation. At the Chicago World’s Fair, No. 999 and engineer Hogan were surrounded by crowds. Toy train manufacturers added “Empire State Express No. 999” trains to their catalogue, and some 3,000 scaled-down functional copies of No. 999 were sold to amusement parks all over the world, as far away as Thailand and South Africa. (One of these mini-locomotives, known as “The Little Puffer”, is still in operation at the Fleischaker Zoo in San Francisco).

After the World’s Fair ended, No. 999 went on a series of national tours until 1952, including two more World’s Fairs in New York in 1939 and 1940. In the early 1920’s, the locomotive had been remodeled with a new boiler, and her 82-inch drive wheels were replaced with standard 70-inch. In 1952, No. 999 was retired from service and sat in a New York Central switching yard until 1962, when it was donated to the Chicago Museum of Science and Industry (located at the same place that the 1893 World’s Fair had been held). After restoration, the locomotive was displayed outside the Museum, exposed to the elements, for 25 years.

In 1992, No. 999 was refurbished and repainted, and brought inside to the Museum’s main exhibit hall. It remains there on display.