Since the earliest days of the 20th century, the United States has been a car culture. And one of the primary reasons for the American love affair with automobiles has been speed. 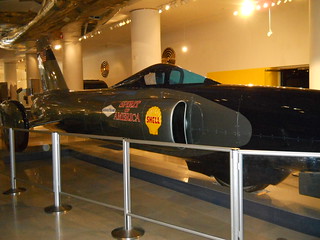 The Spirit of America, on display at the Museum of Science and Industry, Chicago.

The first automobiles, built in Germany by Karl Friedrich Benz and Gottlieb Wilhelm Daimler in 1885, had top speeds of around 25 mph. By 1902, a number of French designers, using steam or electric engines, had pushed the speed record to 75 mph.

In 1904, on a frozen lake near Detroit, Henry Ford climbed into an open-seat automobile he called the “999”, with a specially-built supersized gasoline engine, and set a new land speed record, propelling his car across the landscape at the then-astounding speed of 91.3 miles per hour. In 1906, American Fred Marriott, in a steam-driven car called the “Stanley Rocket”, became the first driver to exceed 100 mph, hitting a top speed of 127 mph. The 200 mph mark was reached in 1927 by British driver Henry Segrave in the “Mystery”.

Over the next few decades, the land speed record climbed steadily: in 1933, the “Blue Bird”, with a supercharged Rolls-Royce V12 engine, hit 272 mph, then broke 300 mph two years later. In 1947, the “Railton Mobil Special”, which used two supercharged W-12 aircraft engines, set a new land speed record of 394.17 mph. This was about as fast as a piston engine could go (it exceeded the speed of many airplanes), and John Cobb’s record would stand for over 15 years.

By 1963, though, in the quest for ever-higher speed, designers abandoned the internal combustion piston engine and instead turned to the marriage of the automobile and the jet engine. One of these was Craig Breedlove, who built a narrow aerodynamically-shaped car with three wheels that he named the “Spirit of America”. The Spirit was 38.5 feet long and had a wheelbase of 19 feet 1 inch.

Testing on the new car was begun in 1962 at the Bonneville Salt Flats in Utah–the large flat surface of the dry lake bed was one of the few places suitable for high-speed ground travel. During testing, problems developed with controlling the car, and a new steering system was added. In 1963, the Spirit of America was ready for a run at the record.

Breedlove’s run produced controversy, however. While the International Federation of Motorcyclists accepted the speed record, the International Federation of Automobiles did not, on the grounds that the Spirit had only three wheels, and was not therefore a “car”.  It was also argued by some that the record was invalid because the jet engine in the Spirit of America did not actually power the wheels. As a result, both federations agreed that they would both accept any record accepted by the other, and established a new category for jet and rocket propelled land vehicles.

Breedlove was also facing competition. Art Arfons had built a car using the General Electric J-79 turbojet engine, which was used in the F-104 Starfighter and produced 17,500 pounds of thrust. Although the J-79’s engine manuals were still classified, Arfons had bought a scrapped engine from a junk dealer after it had been wrecked by a bolt sucked into the air intake, and rebuilt it himself. Arfons named his jet car “The Green Monster”. On October 5, 1964, the Green Monster reached 434.03 mph.

Breedlove’s record lasted almost 5 years, until Gary Gebelich, in a rocket-powered car called the “Blue Flame”, reached 622.4 mph. In 1997, Andy Green, in the “Thrust SSC” (which used two turbofan jet engines from the F-4 Phantom fighter), became the first person to break 700 mph, and on October 15, 1997, set a new land speed record of 763.03 mph (in the process also becoming the first car to break the sound barrier). As of 2014, that record still stands.

4 thoughts on “Craig Breedlove, the “Spirit of America”, and the Land Speed Record”